Winter Is Coming (Get It?) 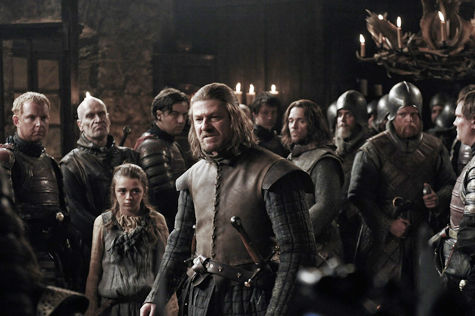 A cursory look at the temperatures will tell you that we’re a long way from winter. But make no mistake about it: Winter IS coming. If you don’t know what I’m referencing, I’m sorry. You really should live life less and watch TV more. That’s what I do. I don’t watch a lot of TV, but the TV I do watch occupies much of my life. LOST was a prime example. I like to snicker at all the vampire drama blah blah blah on True Blood, but right now, I’m completely preoccupied with HBO’s latest time sucker, Game of Thrones, which is based on a series of novels I haven’t read. But after seeing the TV adaptation, I may not have the stomach to.

More accurately, I was hooked on Game of Thrones. It just had its first season finale, and it was quite a cliffhanger. I was going to try to break down the show in simple terms for our readers who haven’t seen it, but that’s a fool’s errand. There are so many names, nicknames and family/realm history thrown at you in each episode that it’s pointless to try to keep up with it all. For those of you out there who have heard about the show and are going to try to watch it en masse on demand or on your fancy portable device at a later date, my best advice to you is just squint really hard, concentrate all you can, then find some nerd on Twitter who can answer all your questions–just don’t get them too worked up because then they’ll never leave you alone.

Here’s the best I can do to summarize and still leave enough word count for my pithy commentary: There are these families who rule a fictional land called Westeros, which is broken up into seven kingdoms (I think), and there was this old king called “The Mad King,” but he also has another name. He was MAD, so this one dude, Jaime Lannister, who fucks his sister, killed him, which got this other guy Robert installed as king. Oh yeah, Robert is also married to Jaime’s Sister (the one he’s fucking). Robert has a buddy Ned who lives in the north. Ned’s cool as shit and ends up working for the king, but there are a whole lot of growing threats amassing outside the realm, like the Dothraki, a race of people who are really into horses (but not in that way). The Son of the Mad King sold his sister to the Dothraki Leader in exchange for an army of savage killers who could march into Westeros and reclaim the Iron Throne, which is where the king sits. The sister, Daenerys, is a total babe and doesn’t like being bossed around by her brother. She becomes queen of the Dothraki and doesn’t take his bullshit any more. But she’s such a babe that the Dothraki Leader decides he’ll charge into Westeros and rape and kill everyone in her name so she can have her Iron Throne back anyway.

Even worse than the horse dudes is that there’s this wall in the far north, and on the other side of the wall is all this crazy shit, like people who don’t bathe ever and White Walkers, who are on some Advanced Dungeons & Dragons type shit. People guard the wall and can never leave, including Jon Snow, Ned’s bastard son (we don’t know Jon’s momma because Maury hasn’t been born yet). There is also a lot of dragon talk–which gets me fucking stoked–and instead of using e-mail, people communicate via ravens. And there are wolves too, but not like the ones on True Blood.

It’s a really intricate story chock full of twists and turns, backstabbing and betrayal, beheadings and nudity and sex and incest and rape and pre-teens talking about getting each other pregnant.

But really it’s a quality program. I’m amped up for season two, which will air spring 2012 (luckily before the Mayan long count calendar ends). The thing that bothers me about the show, and this is the case with a lot of the shows I’ve seen on the premium cable networks I’ve been watching lately (True Blood, Boardwalk Empire, Spartacus, etc.), is that the sex and violence are so extreme. I’m not sure if that makes me a prude or not, but if I want to watch porn (and I’m not a stranger to it), then I will, but if I want to sit down and watch a show because I like a story’s rich intrigue, I don’t really need to watch two prostitutes finger pop one another while a creepy dude rattles off a few paragraphs of expository monologue.

I get that these shows are “adult,” and that’s why I like them. At times, these shows have clever, nuanced plots and wonderful scripts. But it seems like they can’t go four minutes without someone getting their soft-core on or someone graphically getting their head lopped off (or in Game of Thrones’ case, both simultaneously). I’m just wondering if “mature content” necessarily means careless gratuity. Or maybe I should just shut the fuck up and go see Cars 2.