You Are The Weakest Leak 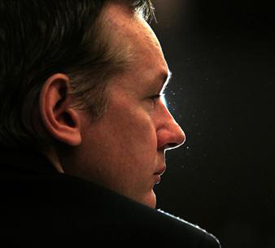 So this Australian dude published hundreds of thousands of U.S. diplomatic cables on his website WikiLeaks last week. More than 250,000 classified dispatches to U.S. embassies around the world revealed the United States’ positions on numerous world leaders, instructions to diplomats to spy on UN leaders and calls from Saudi Arabia for U.S. air strikes on Iran. Is it me, or is Saudi Arabia somehow involved every time some country pulls a dick move? Anyway, from what I can tell, this means two things: more egg on the face of the United States, who just seemed to regain a little respect once the last asshole was replaced as president; and also, a whole lot of reading.

That’s a lot of “cables” to pore through. When I first read the term “cables,” I immediately thought of an old man reading the feed from a telegraph machine. “President of Pakistan is a complete douchebag. Stop.” You know, something like that.

I haven’t been to the WikiLeaks website. Mostly because I don’t want my IP address to get flagged, or wake up one morning to find a “surprise” cache of child pornography on my hard drive and vanloads of feds at my door. I mean, it’s a free country, so that couldn’t happen, right? I’m not a character in The Bourne Identity. I’m not that good-looking.

I figured the best course of action was to just get a rundown on the WikiLeaks debacle by perusing real news sites and seeing what they had to say about it. Should be easy enough. If these cables were so damaging, the Internet should be abuzz with facts and punditry. But my first cursory search only revealed that WikiLeaks founder Julian Assange was in deep shit–and not just for posting U.S. government secrets on his fancy blog. Apparently, he’s under suspicion for raping a couple of Swedish women–just like the last time he took a leak on the Internet.

That’s a bit of an exaggeration. He supposedly raped one of them and only molested the other, but serial rapist is so much more exciting.

Currently, Assange’s whereabouts are unknown, but the most recent article I could find at the time of this writing on Reuters mentioned that he’s likely in the United Kingdom “but [British authorities] have refrained so far from acting on an international warrant for his arrest, a British newspaper said on Thursday [Dec. 2].” Earlier in the same week, Interpol (not that Interpol) issued a “red alert” to authorities to aid in Assange’s arrest. He is wanted under suspicion of sexual crimes, but no charges have been filed at this time. The alleged incident took place in August 2010 when Assange was visiting in Sweden, and he, of course, denies the allegations.

I don’t subscribe to conspiracy theories. I didn’t like the man, but I don’t think President Bush was behind the 9/11 terrorist attacks, or that he knew about them in advance. I have a hard time believing Mr. Bush “knows” anything, but that’s another matter. And yes, I saw Loose Change, and yes, I did think it was fucked up. But it still wasn’t enough to make me barricade myself in an attic wearing a tinfoil hat.

However, am I the only one who finds the timing of this Interpol arrest warrant a little convenient? It doesn’t exactly take WikiLeaks out of the headlines, but it does deflect the focus of the reporting a little bit. If this isn’t merely coincidence (and what a coincidence!), I have to say rape charges are the way to go. Even murder–at times–can be rationalized. You could say, “Oh, but it was self defense,” or, “He slept with my wife, and I just snapped.” These murders may still be crimes, but fair-minded people could say, “Well, he was pushed to the breaking point. Who knows how any of us would react to that?” You can’t really go that way with rape. You can’t say, “Well, I raped her for her own good,” or, “There was no way to defend myself other than to rape her.” You could, I guess, but you wouldn’t find many sympathetic ears–except from other rapists.

Assange’s arrest warrant nabbed the top spot on Google News Wednesday, Dec. 1 as of this writing with upward of 4,000 related articles. Good thing for Assange (and the United States) that no one’s actually going to take the time to read all that.