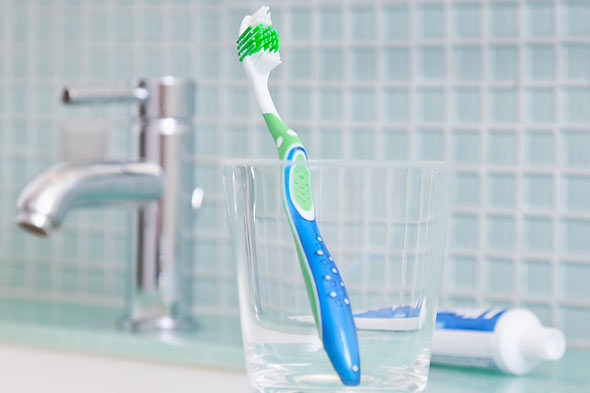 I rummage through a lot of headlines as part of the usual process of writing this column. Whether or not it comes through in the finished product, it’s actually a lot of work. Over the past 188 issues prior to this one, I’ve come across a lot of troubling headlines: Ebola outbreaks, mass shootings at schools, whatever shenanigans ISIS is up to. But today on Google News, I discovered one of the most disturbing headlines I’ve ever seen, because it hits close to home for all of us: “Your toothbrush may be covered in poop.”

Just let that sink in for a second, because the subhead is perhaps even more frightening: “Researchers found no practical method for daily protection from fecal contamination.” (Italics were mine.) Honestly, I’d be willing to hear out any impractical methods they might have come up with, but that’s another matter.

The article written by Brooks Hays for UPI.com references a study conducted by researchers at Quinnipiac University. The study focused on resident students who shared bathrooms with at least nine other people, and it was discovered that 60 percent of the toothbrushes tested “were contaminated with fecal matter, regardless of storage method,” and 80 percent of those poop-positive toothbrushes were adorned with feces particles that belonged to someone other than its owner.

Even if you live alone, your toothbrush may be little more than a minty-fresh poopsicle, but the researchers stated in a press release that you don’t have to worry about that so much. It’s OPP (other people’s poop) that’s the real danger here, because it “contains bacteria, viruses or parasites that are not part of your normal flora.”

Sure, this is unappetizing news. Just the idea that I’m probably scrubbing my mouth every morning with a cocktail of Colgate and my “normal flora” triggers my gag reflex much in the same way the thought of someone drinking a warm, mucus-y bottle of Kombucha (just puked in my mouth a little) does. However, as the subheading to the article reads, we are defenseless against this fecal invasion. Researchers found no magical way to store your toothbrush to keep it poop-free. Like, those little plastic covers you can put over the bristles? They just keep your toothbrush moist and ripe for bacterial growth. You’re better off just airing it out and hoping for the best. Basically, eat shit and like it.

What’s refreshing about this headline, though, is that it’s so direct. Hays and UPI.com could have easily gone the Upworthy/Buzzfeed route and came up with something like, “Scientists Study Your Toothbrush, and What They Found Will Frighten You.”

I mean, what they found did frighten me, but what frightens me more are headlines that tell me how I’m supposed to feel about something. When I see a video of a doggy freaking out because his favorite girl human returned home from college, it makes me giggle like a 12-year-old hearing a dick joke for the first time. That’s because I’m a human being who experiences real human emotions, and anything involving dogs loving up on something/someone and yapping like a doofus and being so happy they do that thing where their whole body curves into a U-shape is going to make me feel every feel. You don’t have to bait me with a headline like, “What Happens Next Will Astonish Me.” What if it doesn’t? What if I’m only bemused? You’re just going to make me feel inadequate, and it’s going to cause me to ban articles from your site from my Facebook feed. Also, don’t start anything with, “You’ll never believe …” because I’m apt to believe just about anything. I’m still positive that black and white, grainy photo of the Loch Ness Monster’s head and neck peeking above the water is proof that there’s some sort of ancient sea beasty residing in a Scottish lake. I don’t care how many myth-busters out there have debunked it as a hoax. I don’t care. You don’t live in the Loch. How the fuck would you know what’s down there?

Anyway, what I mean to say is, no matter how disgusting it is, I’m proud of UPI.com for just saying it like they mean it. It’s proof to me that real journalism can exist in the Internet age. I’ll take comfort that there are still some watchdogs of democracy out there fighting the good fight, even as I scrub my teeth with spearmint-flavored poop particles. At least it’s better than the shit the rest of the Web is trying to feed me.