You’ll Shoot Your Eye Out 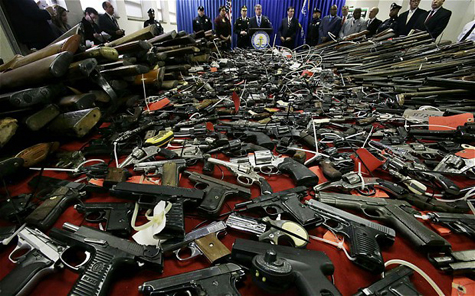 The Second Amendment could have used an editor. While there is still some squabbling about capitalization and punctuation, everyone agrees that ol’ No. 2 states, “A well regulated militia, being necessary to the security of a free state, the right of the people to keep and bear arms, shall not be infringed.” You couldn’t tell by its awkward phrasing, but this Amendment must have been pretty important to the writers of the Bill of Rights; only freedom of speech, press, assembly and religion got higher billing.

This makes sense as the founders had just won a bloody eight-year war for their independence from King George III; they couldn’t afford to lose all they had just gained. With the disbandment of the Continental Army, Navy and Marines shortly after the war, militias were needed, encouraged and sometimes required. This network of militias kept the country safe until the Constitution was ratified by the first states and the military was reestablished. The further development of local law enforcement agencies meant that militias were no longer needed to protect the country.

While the need for militias may have died out, our love of guns did not. Today there are an estimated 270 million guns circulating in the U.S. population. That’s nearly a gun for every man, woman and child in the country. Those guns and their shooters kill 30,000 Americans each year. We’ve also seen 25 mass killings in this country since 2006, seven of which took place in 2012 alone. I am a proud gun owner and a fan of the Constitution as well, but this shit has got to stop.

The NRA wants to blame gun-related deaths on things like video games, movies and music for glorifying violence, but that argument ignores reality. Culture is our biggest national export and our music, movies and video games are distributed around the world. They watch the same movies and play the same video games as we do; yet, for some reason, the citizens of other first world countries don’t shoot each other all the time as we do.

When it comes to mass killings at least, mental illness seems to be a factor. This country has done a terrible job of helping the mentally ill. Prescription drugs replaced therapy long ago and patients were cut loose into the streets to live on their own devices. Today, much of society views going to therapy as a shameful thing or a sign of weakness, leaving those who need it too embarrassed to actually get it, which leaves the rest of us guessing who is too dangerous to have a gun.

Speaking of crazy people, some Americans think they need guns to protect themselves from the government. What they don’t realize is that no matter how many guns they own, they will always be out-armed. The U.S. Government has more tanks, aircraft carriers, submarines, attack helicopters, fighter jets, bombers, cruise missiles, bunker-busting smart-bombs and chemical, biological and nuclear weapons than anyone else. They also have attack drones, so they can kill you from the comfort and safety of an office chair. How’s that for a violent video game?

All jokes aside, there are some things we could do to reduce the amount of gun violence in this country: Better reporting of warning signs and direct threats made by patients to therapists would surely help reduce some of our gun issues. Mandatory background checks could be improved through the sharing of information between local law enforcement and the FBI in a common database. This would allow for quick background checks that could also be applied to private gun sales.

We could also limit the number of guns an individual is allowed to purchase in one year, so as to prevent straw purchasers from buying guns for people who legally can’t. Those who do legally buy guns should be required to take a gun safety course before they are ever allowed to leave with a firearm. The guns that they buy and the clips that come with them should have limited capacity. If you need more than six shots to hit something, then you might want a lesson.

We need to do something. Thousands of people are dying every day so that some old white guys can shoot pheasants and paper targets shaped liked Osama Bin Laden. I understand that guns are and may always be a part of our national identity, but we don’t have to sit back quietly while they pick us off one by one.