Your (Pay) Day in Court 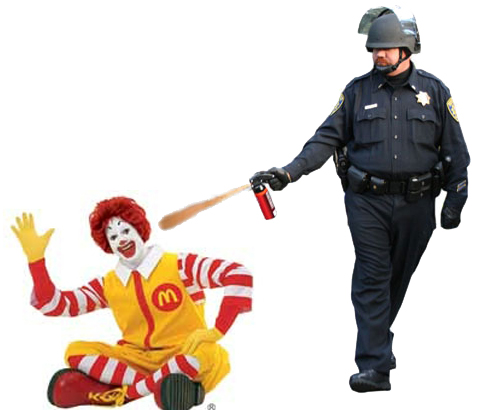 Right now I’m drinking a coffee from McDonald’s. Don’t worry; I know it’s HOT. But it’s not as hot as it used to be. We can thank the late Stella Liebeck for that.

You remember Stella. She was a meme before memes were memes. She’s the lady who sued McDonald’s for millions of dollars because she spilled some hot coffee on herself while she was driving one fateful day in February 1992. At the ripe old age of 79, the Albuquerque, N.M., resident caused a worldwide stir with her frivolous lawsuit. A judge awarded her $2.9 million, and we all scoffed. Here was a case of our legal system out of whack. Coffee is hot? Well of course it is! It’s coffee! And here’s this vulture Liebeck suing for making such an idiotic mistake (i.e. driving with molten lava in her lap) and making herself rich.

What an asshole, right? Well, not really. According to a “Retro Report” posted to the New York Times’ YouTube page on Oct. 21, 2013, all of us (myself included) who pointed the cruel finger of judgment at Liebeck should have gotten our facts straight.

First off, Liebeck wasn’t driving when the coffee was spilled. She was actually sitting in the passenger seat at the time. When she pulled off the lid of the coffee cup, the hot liquid soaked her sweat pants and she received third-degree burns over 16 percent of her body. That’s a pretty serious injury. Skin had to be grafted from her legs to heal the burn on her groin. According to the report, at the time of the incident, McDonald’s served coffee at 180 to 190 degrees (30 degrees warmer than your home coffee maker), which can cause third-degree burns in less than 15 seconds. Liebeck wasn’t alone, either; between 1983 and 1992, 1,700 people received burns from McDonald’s coffee.

OK…but how could she ask for $2.7 million for spilling coffee on herself? Well, she didn’t. Originally, she didn’t take the fast food giant to court but simply wrote the corporation a letter asking McDonald’s to reduce the temperature of their coffee and for recompense for her medical bills. In response, the company offered her $800. She even tried to settle out of court, but McDonald’s refused. When the case went to court, the jury unanimously ruled for Liebeck, awarding her $160,000 in damages (reduced because she caused the spill) and set punitive damages on top of that to send McDonald’s a message.

In the end, the settlement was reduced, and Liebeck didn’t actually become a millionaire from spilling hot coffee on herself. She walked away with less than $600,000. Sure, it’s a nice chunk of change, but probably not worth being the butt of a million jokes. What she did accomplish, however, is that McDonald’s now serves their coffee 10 degrees cooler. If you think about it, she may have saved many of us from further injury. Maybe we should thank her… Oh, wait… We can’t because she passed away at the age 91. Sorry, Stella. We’re a bunch of fucking jerks.

It’s a sad story because it shows how eager we are to jump into things that really don’t concern us and make them an even bigger mess than they already are. Look at this case with former police lieutenant John Pike, the pepper spray cop. Back in November 2011, he was videotaped dousing a group of UC Davis students (who were by all accounts peacefully protesting tuition hikes) with a deluge of pepper spray. Much like Stella Liebeck, John Pike became reviled worldwide and, since we are now firmly in the digital age, extensively used as meme fodder. I have to admit, “pepper spray cop” probably would be my vote for Meme of the Year 2011 if such an award exists.

The three dozen students who were assaulted by Pike received recompense for their injuries to the tune of $1 million. But they weren’t the only ones who felt they were entitled to compensation. Pike himself recently filed for worker’s compensation due to the incident. He claimed mental injuries as a result of the fallout from the attack and was rewarded $38,055 for his hardship.

Here’s another case of the legal system gone awry, right? I mean, the balls on this guy, huh? I’d have to agree. This seems like utter bullshit, but does the blame fall on our courts alone? I don’t think so.

After he became known to the world as the pepper spray cop, Pike’s home address and phone numbers were posted online. According to the police officers union, he received more than 17,000 threatening emails, 10,000 texts and numerous letters. Even though what he did only really affected a few dozen, thousands of people felt they had to stick their noses in and let the disgraced cop know what kind of asshole he was. While I agree what he did was wrong, in actuality, if you’re one of the people who hounded Pike and called him out for being a neo-fascist henchman for the 1 percent or whatever, really all you did was help him build a case. Maybe we’d all be better off if we just kept our outrage in check.