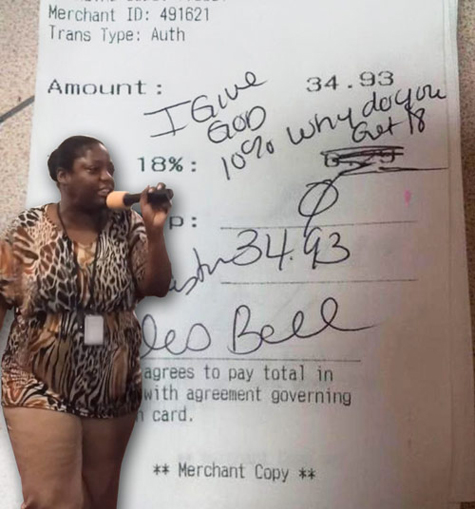 When human beings first discovered fire, I wonder if they had any idea what it would mean for their species. Did they have any idea that this mysterious and dangerous apparition they had conjured from maybe a couple pieces of wood would eventually stoke the flames of industry and spark countless revolutions? Could they have possibly foreseen the rise of cities and science and the World Wide Web? Did they know that fire would one day contribute to Applebee’s waitress Chelsea Welch losing her job?

That may be a quite a leap in logic, but it’s important to track things down to their sources. Nothing just happens. A combination of factors must be considered before you can really understand any event.

Welch was working at an Applebee’s in St. Louis, Mo., when a colleague of hers who had been working the table of a large group received a snarky note on a receipt. It was from a pastor, no less, Alois Bell. Groups of six or more are charged with an 18 percent gratuity, as you probably know, and as you’ve probably tried to pull in the past, Bell had tried to get the bill split up so she could avoid the mandatory tip. However, when the 18 percent was added to her total regardless, she wrote, “I give God 10 percent, why do you get 18?”

I don’t know Bell personally, but I do know one thing that holds true for people in general: You can tell a lot about a person by how they treat the people who work for or serve them. They may be the most easygoing and friendly person in the world, but if you discover that someone is unduly snippy, condescending or overly demanding of a waitress, you should probably end your relationship with that person immediately. If you are that person, buy a rowboat and paddle out to the middle of the ocean, because you’re no good for society.

Sure, we’ve all had bad service. In those situations, you should probably just keep your mouth shut and tip the absolute minimum. That’s what civilized people do. Chances are, if the waiter was really that shitty, he or she won’t be working there much longer anyway.

Live and let live. Didn’t Jesus say that? Well, he probably should have, because those are words to live by. And if he did, Pastor Bell should have kept that in mind. Her server doesn’t make the rules as far as mandatory gratuities are concerned. I’m assuming if she had, it would be a hell of a lot more than 18 percent. Regardless, Pastor Bell is governed by a much Higher Authority than the Applebee’s Corporate Office. She’s got to answer to the Man Upstairs, and I’m sure if God was seated at the bar at Applebee’s, He’d throw down a generous tip for His appetizer sampler platter and pint of Blue Moon (no orange, thank you). If His service was poor, do you think He’d scrawl some crankyass note on a receipt? Hell NO He wouldn’t. Maybe He’d just leave the change and deal with the issue at another time, if you know what I mean.

Bell should probably practice what she preaches (see what I did there?). But is that really the cause of all of this hubbub? No. This shit happens all the time. It’s probably happening right now in some generic chain restaurant in any mega-shopping plaza in Whereversville, U.S.A., as you read this, but this incident went viral thanks to Welch posting the photo of the receipt to Reddit.

It spread quickly and led Welch, though she wasn’t the person to whom the note was directed, to losing her job. In so doing, Applebee’s started a related Internet shit storm of people demanding the restaurant chain hire Welch back. Applebee’s then countered with an explanation, which only pissed off people more, and then decided (inexplicably, in the middle of the night) to start responding to the angry comments individually, which got people even more pissed and now the minor shit storm about one person losing her job over something stupid turned into an Internet feces tsunami with tens of thousands of comments about why their comments were deleted or ignored or responded to or yadda yadda yadda.

All of this leads us to this—what you’re reading right now. So how did this all start? Was it the ever-growing Internet mob outraged at Applebee’s? Or, that Chelsea Welch got fired for posting a photo? How about the note that started it all? I think it goes back further than that.

You see, about 1.2 million years ago in South Africa (according to an article on WBUR.org) it is believed that a group of prehistoric humans sat down and made themselves a fire…