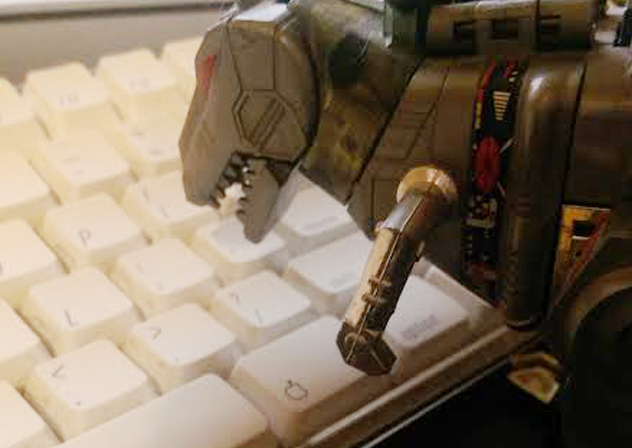 Teenagers, am I right? Honestly, I don’t know how parents deal with them. It’s a lot worse now than it was when I was a kid. Like, how can you keep them from doing crazy shit when they have the Internet and whatnot? Back in my day, we had pager codes, but you could only get so far with those things. They were just boring, digitized numbers, not noodz of that girl in chemistry class. Like, 911 or 143 or…um…I don’t know. We were fucking idiots.

Nowadays, teenagers are still fucking idiots, but they have all this awesome stuff. They have a computer more powerful than the ones that sent humans to the moon back in the ‘60s, and it’s right in the palms of their hands, but all they do is take selfies with them.

But then again, there’s no better time to make bad decisions than in your teen years. You could fuck up royally and still grow out of it and become a big movie star like Mark Wahlberg. When he was a teen, he committed, well, he committed hate crimes. There’s really no other way to put it. He bullied black children when he was 15 and used racial slurs against them, and when he was 16, he attacked a Vietnamese man with a stick, and tacked on a few racial slurs for good measure.

He served his punishment for these crimes and genuinely reformed himself. Now he’s 43 and a decent member of society. He even has a charity that reaches out to troubled children called the Mark Wahlberg Youth Foundation. It’s raised a bunch of money for a worthy cause. Plus he was an executive producer for Entourage, which is my favorite guilty pleasure that I don’t feel any guilt for taking pleasure in. 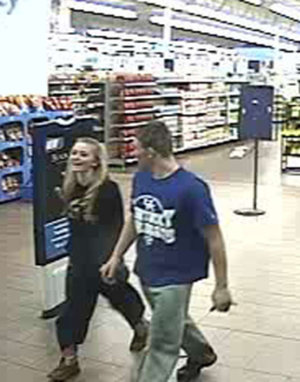 So you can turn it around, which I guess is all we can hope for in the case of Cheyenne Phillips and her boyfriend Dalton Hayes. The teenage couple went on a two-week crime spree that started in their hometown of Grayson County, Kentucky, and ended this past weekend in Panama City, Florida. They were being dubbed a “modern day Bonnie and Clyde,” because I guess crime sprees are cool as long as you’re young, reasonably good-looking and in love. Fortunately, their crime spree—which involved some stolen cars, some with guns inside, check fraud and damaged property—didn’t end in some shoot-em-up, blaze-of-glory kind of way. Phillips and Hayes were taken into custody without incident. Both were caught sleeping in a stolen truck.

Hayes, 18, may face a few felony charges, but Phillips, who is just 13 (HOLY SHIT) was taken into custody by protective services. I suppose we could squabble about what the hell a 13-year-old girl (who definitely doesn’t look her age) is doing dating an 18-year-old dude, but perhaps it’s for the best. Maybe young Cheyenne learned a valuable lesson that she should have better taste in men. And maybe Hayes learned it’s better to date older women with cars, so he won’t have to steal them. 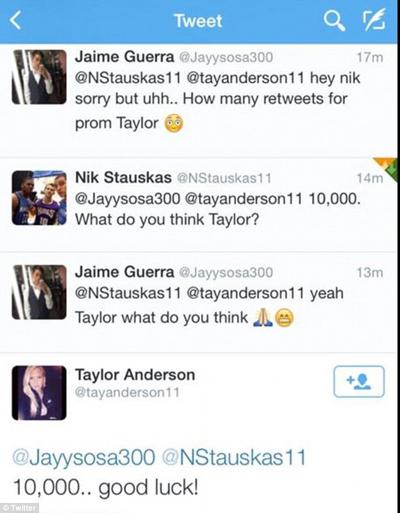 Life lessons are important, and we’re never too old to learn them. Take Nik Stauskas for instance, rookie shooting guard for the Sacramento Kings. He’s not a teenager anymore (he’s 21) but Woodhaven, Michigan, high school senior Jamie Guerra still is. Via Twitter, Guerra asked Stauskas, who played his college ball in Michigan, how many retweets it would take to get Stauskas’ girlfriend, Taylor Anderson, to accompany Guerra to the prom.

For whatever reason Stauskas responded with what I guess he thought was a big number: 10,000. Anderson playfully agreed to go along with it.

To be sure, 10,000 isn’t necessarily a small number. You couldn’t eat 10,000 eggs in one sitting, for example. But the World Wide Web and eggs are two entirely different things. The Internet loves shit like this. Guerra had his 10,000 retweets in a few hours and a date with Anderson, who will most likely leave a wake of boy-teen drool behind her as she struts into the prom.

Stauskas invited himself to be a “chaperone,” because, though he may not be great at estimating the power of the Internet, he’s clearly not stupid.

These “news” items made me think back to what being a teenager was like. I definitely wasn’t running from the law with my sexy underage girlfriend. And I certainly wasn’t playing basketball—or even using the Internet to hook up with basketball players’ girlfriends. I wasn’t even cool enough to have a pager. I was boring with a capital B. I read in the school’s library to avoid eating lunch in the cafeteria. But that’s not why I’m happy I’m older. It’s because in my advanced age, even though I can’t run up a flight of stairs without having to take a nap after, and every day I find a new thing on my body that inexplicably hurts, I’ve just about got everything figured out. I’d share my vast knowledge with you now, but I’m unfortunately out of space.