Ain’t Nuthin’ but a G Thang

Godzilla is one of Japan’s most beloved exports to the United States. He’s a big, dopey, dinosaur-like monster, traditionally played by an actor in a suit, who would stomp around on miniature sets and sometimes battle other actors dressed in monster suits. Silly? Yes, extremely so. Still, America has already managed to muck up what should have been an easy filmic slam dunk. Back in 1998, director Roland Emmerich, armed with an infinitely more impressive arsenal of special effects than his Japanese predecessors, made what was probably the worst monster movie ever. Paying little or no heed to the four decades of Godzilla’s cinematic history that came before him, Emmerich instead opted to make a dumbed-down version of Jurassic Park, and, as you can probably tell, I’m still kind of bitter about it. But I’m not the only one. Even though Godzilla is one of the biggest brands in geek cinema (and geek is so in right now), it took 16 years before America took another crack at The King of the Monsters. This time, little-known Gareth Edwards is at the helm, and though the overall results are lackluster, this latest addition to the Godzilla canon lays down a solid enough foundation for a possible American franchise.

It’s easy to look at the Godzilla franchise and see the films as goofy and campy—they were, for the most part—but there was something else going on too. In fact, the 1954 original, Godzilla (or Gojira as it was known in Japan) was a terrifying and noir-ish monster flick that illustrated the fear and confusion of a people trying to make sense of what had happened less than 10 years prior in Hiroshima and Nagasaki. It would seem that Edwards and his screenwriters Max Borenstein and Dave Callaham wanted to run with the more serious aspects of the monster in Godzilla (2014). 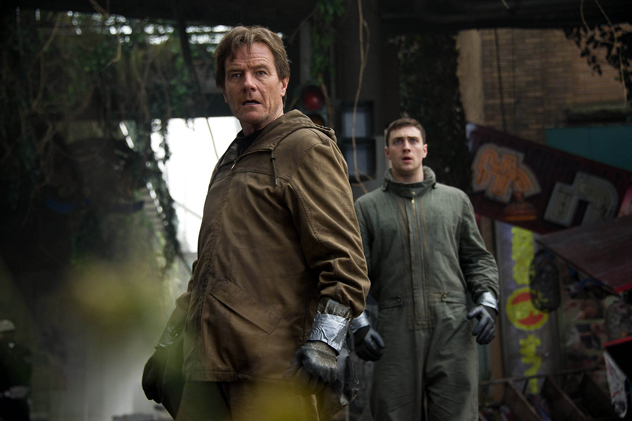 Edwards’ film looks to the nuclear testing in the ‘50s. As it turns out, these weren’t tests at all, but attempts to destroy Godzilla. However, the monster endured, and in the process, mankind awakened other, more dangerous, ancient threats. The movie then fast-forwards to Janjira, Japan, 1999. An American family, Joe and Sandra Brody (Juliette Binoche and Breaking Bad’s Bryan Cranston), is working at a nuclear plant when a suspicious earthquake leads to tragedy and fallout. We jump ahead again, 15 years later, and the Brodys’ son Ford (Kick-Ass’ Aaron Taylor-Johnson) is returning home to San Francisco from a tour with the U.S. Navy. He barely has time to reconnect with his wife and son when the phone rings and his father, now convinced that what really happened at the Janjira plant has fallen victim to cover-up and conspiracy, has been arrested for trespassing in the quarantined zone. Ford heads back to Japan to bail out his dad and inadvertently ends up in an international monster hunt.

International being the key word here, as the film jumps from location to location at the drop of a hat. Hawaii, Tokyo, San Francisco, Oakland, Yucca Mountain Nuclear Waste Repository, Las Vegas…even Lone Pine, California—at times, Godzilla can be dizzying, and not because of its fast-paced action. There are also a lot of characters played by extremely capable actors. Besides the aforementioned, we also have David Strathairn playing Admiral William Stenz, a no-nonsense military man charged with ending this monster debacle; and Ken Watanabe as Dr. Ichiro Serizawa, a scientist of some nebulous discipline who believes that Godzilla is nature’s way of keeping the Earth in balance. While the cast is a nice plus, they don’t really have much to work with. Though the script brushes upon deeper themes that are in line with the original Godzilla (i.e. the consequences of man’s meddling with Mother Nature and his lust for power), there are mostly just longwinded passages of relationship tedium that made me squirm in my seat and grumble, “Where the fuck are the damn monsters, already?”

Luckily, when they do show up, they’re awe-inspiring. Edwards, who has a special-effects background, presents Godzilla as god-like. He’s humongous, and when he first makes landfall in Hawaii, it’s like Poseidon just unleashed the Kraken: a tsunami batters the shore, buildings crumble, people scatter. And unlike Emmerich’s team, who felt the need to redesign Godzilla completely, Edwards once again pays homage to his forebears and recasts Big G in a very familiar light—the upright stance, somewhat pudgy belly and big spines running down his back.

When Godzilla finally encounters the film’s other two monsters, the battles are all-too brief, but satisfying. In a nice twist, the human characters, who had dominated much of the movie’s action, take a back seat to Godzilla’s heroics. It’s far from perfect, but this could be the start of something good. My faith in America has been restored.