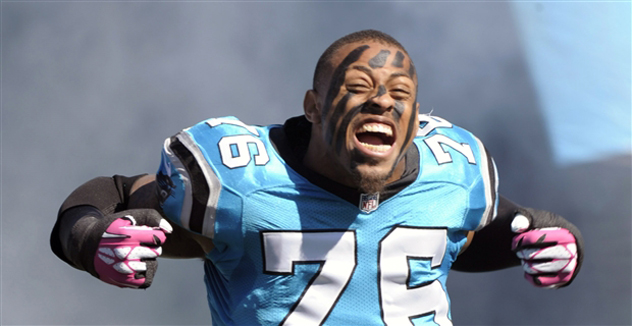 It’s week 5 of the NFL season. How are your fantasy teams doing? Are you trying out those trendy one-week fantasy leagues, or are you an old fart like me who sticks to the traditional seasonal leagues? Perhaps, like me, you’re a total nerd and play in a league that awards points for individual defensive players (as opposed to leagues that use the stats for team defenses, which is poseur shit). If you’re in an IDP league like me, you might have hawked your waiver wire this past week because former elite pass-rushing defensive end Greg Hardy will be back on the field, now as a member of the Dallas Cowboys … you know, America’s Team.

Hardy’s coming off a four-game suspension, though, so he might be a bit rusty. Oh, he also only played one game in 2014 because he was charged (and actually convicted) of domestic violence charges. Hardy appealed the judge’s decision and requested a trial by jury. When the victim, Hardy’s ex-girlfriend, failed to appear to testify, prosecutors dropped the case, stating that the perpetrator and victim had reached a “civil settlement.”

Though Hardy didn’t receive jail time, he did lose his job with his then team, the Carolina Panthers … sort of.

Jerry Richardson, Panthers owner, deactivated Hardy for the team’s first home game and placed the defensive lineman on the commissioner’s exempt list. This sounds all well and good as it barred Hardy from participating in any team activities; however, he was still able to collect his salary, $13.1 million, which really put the fun in funemployment. It’s interesting to point out, though, that the domestic violence incident and subsequent conviction took place months prior to the start of the 2014 NFL season, and Hardy wasn’t deactivated by the Panthers until after a video of Baltimore Ravens running back Ray Rice assaulting Janay Palmer in an elevator was leaked to the public. I’m sure that’s just a wacky coincidence, though.

But I’m a firm believer that redemption is a thing. I mean, just because Hardy received no real punishment for threatening a young woman’s life, attempting to strangle her and tossing her on a couch covered in firearms, and then got to spend the better part of a year dicking around in his mansion or whatever, making it rain $13.1 million all over his marble foyer doesn’t mean he wasn’t doing a lot of soul-searching. Perhaps he realized the error of his ways and felt the need to make himself a better man.

So he got himself reinstated to the NFL as a free agent and signed with the Dallas Cowboys for one-year deal with another $13.1 million price tag. The league hit him with a 10-game suspension. It got reduced to four in arbitration, because … well … I mean he didn’t shoot her with all those guns, I guess?

OK, so dropped conviction, lessened suspension, $26.2 million … oh, right, redemption. If for nothing else, Hardy has 13.1 million reasons to make himself into a model citizen. And surely, he’s raring to go after a year-plus away from the football field, especially for such a high-profile team that’s a perennial playoff contender. So, like, maybe it’s understandable when he told the press that he’ll be “guns blazin’” when he faces the New England Patriots in his season debut. I mean, it would be understandable if he hadn’t tossed a woman on a pile of guns.

But it’s just an expression, right? I’ve never really used it before, but I’m sure people have. Especially in Dallas, where I expect just about everyone is packing heat. Cowboys owner and professional douchebag Jerry Jones laughed off Hardy’s comment reassuring fans and opposing players alike that his prized free agent acquisition wouldn’t be bringing guns on the field.

However, Hardy also had something to say about Patriots quarterback Tom Brady’s wife, supermodel Gisele Bundchen. “Have you seen his wife? I hope she comes to the game,” Hardy told Dallas Morning News. “I hope her sister comes to the game, all her friends come to the game. One of my favorite games of the year, guys.”

Charming. As much as Hardy talks, though, he won’t address his past troubles, saying that he doesn’t want to “reminisce” about what’s behind him, because, you know, he’s had it tough. When he first arrived to Dallas back in April, Hardy was forced to abandon his Bentley as flood waters rose around it. If that doesn’t make a man reassess the choices he’s made in life, I don’t know what will. 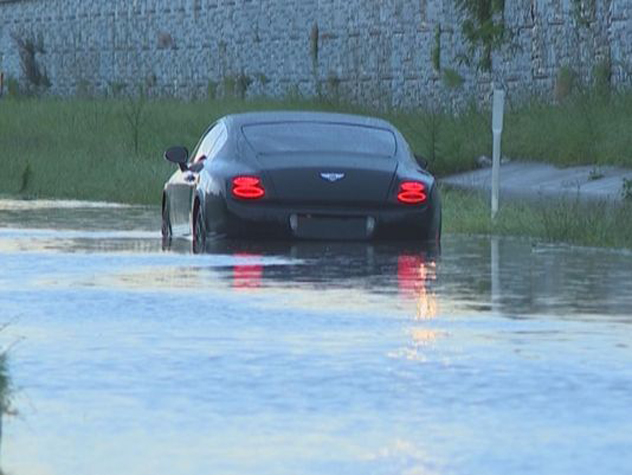