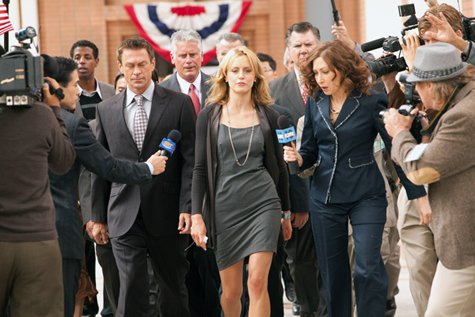 As this film is the nadir of entertainment, let’s keep the synopsis short: Dagny Taggart (Taylor Shilling) owns Taggart Transcontinental alongside her myopic brother, James Taggart (Mathew Marsden). Dagny works against her brother striving to make Taggart Transcontinental the best railroad ever! Yet her brother’s D.C. politicos only want to maintain underproduction, collectivism and profit sharing, and they make business development hard! Dagny teams with Hank Rearden (Grant Bowler) and they upgrade Taggart Transcontinental’s Colorado line with Rearden Steel’s new, extremely light, blue iridescent steel. And continually many of Dagny’s affiliates, the important entrepreneurs, first movers and creative minds who own companies, disappear.

The acting of Marsden, Bowler and Schilling is flat, stagnant and unattractive. It’s as depressed as the 2016 dystopic American economy depicted in the film. The robotic, unemotional acting that is forced upon us as Schilling smirks and jerks her way through the giant black holes which connect one fragmented scene to the next clipped attempt at narrative development physically made us cringe.

Yet perhaps we can phrase this in a different way: there is no good acting within this film, because as a film–in consideration of the script, the subject of objectivist philosophy (read: libertarianism), the mystery that develops so quickly we don’t have time to care about it at all and the rushed production of the film–it is not meant for good acting. A dystopic future America that operates at some level between fascism and anti-monopoly socialism requires, as subjects of this economic incongruity, business leaders that nobody sympathizes with anyway.

On the formal level, the film can’t decide if it’s a mystery, a romance, a fetish piece about the glory of private business development or a tirade against government interference. Of these disinterested perspectives, the latter two have larger implications with our contemporary moment.

All Dagny Taggart wants to do is run a successful railroad business, connect the nation and make a lot of money doing it. Within Atlas Shrugged, oil prices are over $43.00 per gallon, but our protagonist–a robotic woman we’re supposed to sympathize with, who owns a train company–drives around urban high-rises in an extended limo. While she does this, the camera poignantly focuses our attention on destitute middle class panhandlers holding signs detailing their work experience. And just in case we didn’t get it, the film goes out of its way to disparage multiple characters who are working for social protections and services. But Dagny can’t run her business freely because the government keeps passing legislation against her interests. Thus in promotion of laissez-faire capitalism, the straw man is inevitably the fear-inducing, regulation machine called the State!

The government of the film pays lip service to social welfare while discriminately breaking apart functional businesses (and not providing any welfare). In fact, there isn’t a redeeming politician to be seen in the film: they only dismantle Rearden Steel and make investments with playboy frauds. And, based on this logic, we understand why James Taggart would want to insure Taggart Transcontinental with their guarantees. Right?

There’s even union bashing! Early on, Reardon tells his secretary to “file,” and therefore trash, a message from the United Metal Workers Guild. So if Rand were alive she’d be alongside Scott Walker busting the unions of Wisconsin.

This last point is most troublesome in consideration of the film’s terminal final scene, where entrepreneur Eliss Wyatt disappears. He burns his oil fields in Colorado, and says through the magic of overdubbed audio, “I’m on strike.”

According to Rand’s text the minds of U.S. business–those people who have been disappearing–can no longer operate within this oppressive government so they seclude themselves and their ideas from society. Effectively they go on strike and stop producing so that society can realize exactly how valuable their ideas really are. This embraces tactics of the left, or labor, for the use of the right, privatization of intellectual property without government regulation.

So to recap, Atlas Shrugged disparages the state, regulation, politicians, unions, workers, the unemployed, socialism, nationalization and anti-monopoly policies. But excessive luxury, personal drive, individualism and profit are all great–even in the face of overwhelming financial disparity.

No wonder the only audience members were old white people.