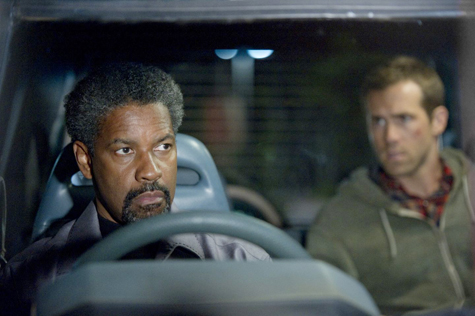 Being a hero is all well and good, but what exactly does that entail? Altruism will only get you so far in a world where things are rarely black and white.

Safe House isn’t as deep as all that. It’s an action movie. But it does touch on some of the shadier aspects of life in a post-Cold War/Global War on Terror world. And there are explosions. Lots of them.

The film opens in Capetown, South Africa, where we find fledgling CIA agent Matt Weston (Ryan Reynolds) charged with guarding a safe house. He’s young, idealistic and ambitious. He wants to play a bigger role with the agency, presumably to keep his country safe. He yearns for a day when he can leave his cushy detail behind and really get out into the field, doing serious work.

He gets what he wishes for when he crosses paths with Tobin Frost (Denzel Washington), a legendary but disgraced CIA operative. Frost, a rogue agent accused of treason, inexplicably turns himself in to a U.S. consulate in South Africa after gaining some coveted intel from a British MI6 officer and narrowly escaping a pack of faceless, bloodthirsty heels out for his head. Frost is brought to Weston’s safe house to undergo questionable interrogation practices to find out just why he brought himself to Capetown in the first place. That’s when the shit hits the fan.

Weston’s safe house has been compromised. The same men after Frost in the beginning of the film have stormed the supposedly secure location, and Frost and Weston sneak out by the skins of their teeth. The latter then does his best to bring the rogue agent to justice and get to the bottom of the mystery surrounding his surrender, and what follows is a proverbial journey into the heart of darkness.

Safe House is stingy in divulging the details of exactly what’s going on. The film moves from one elaborate action-filled set piece to the next with nary a moment for the audience to catch its breath. Swedish-born director Daniel Espinosa, making his Hollywood debut, certainly makes an impression. Safe House has a very distinct look. The colors are saturated, the film looks grainy and the rapid pace of the shaky camera work is extremely disorienting. One close-quarter fight in a tenement between Frost and Weston and two armed pursuers may very well induce seizures. At points, it feels like style over substance. The technique is so flashy that it overshadows the action itself. However, with all the extreme close-ups and first-person feel of the camera work, there’s an intimacy to the violence, of which there’s plenty. Even the deaths of nameless henchmen feel personal.

Even at its most nauseating, Safe House’s action is extremely vivid. Unfortunately its plot isn’t so forthcoming. Playing the intricate details of the story so close to the vest, it’s a good two-thirds into the film before we’re even given a hint of why all these people want Frost dead–and it’s a vague hint at that. There’s a file, sure, and it points to some very powerful people. That much was apparent from all the hullabaloo surrounding the events of the film, but it never feels specific enough.

Luckily, Safe House has a good enough cast to keep things interesting, even through its most head-scratching moments. Vera Farmiga, usually solid, exudes confidence as the only notable female presence in the film. Most of Safe House rides on the shoulders of Washington and Reynolds, who have little problem carrying its weight. Washington may be showing his age, but he’s still a force to be reckoned with in a role that demands such physicality, and Reynolds doesn’t wilt in the shadow of such an accomplished co-star. There’s not even an inkling of the wisecracking caricature Reynolds is known for. Instead, we see a more or less honest portrayal of a good man pushed to the edge.

Sarcasm has no place in Espinosa’s Safe House. This is an entirely humorless film, but it’s not a tedious one. It’s more sweet than savory, but if you want to experience two hours of chaos from the safety of a cinema, you could certainly do worse.