EMOTIONAL IQ: Inside Out

The elevator-pitch meeting for Pixar’s new flagship must have been delightfully bizarre. One can almost hear the question being posed: “What if we could make Finding Nemo more like Inception?” To say that phrase is accurate to some extent about the resulting film is not a mark against the company’s latest triumph in hi-tech imagineering. Rather, it’s evidence that they’re still provoking themselves to create stories that entertain, enrich, and expand their audience.

With Inside Out comes a clever new inversion of the Pixar model. Where before they have transformed ideas into expansive, animated worlds, here they succeed in animating the expansive world of ideas themselves. Nobody asked for a blockbuster that holds the same potential appeal for toddlers and psychology professors, but with a current box office total inching toward $300 million, it sure turned out to be what we wanted.

The surface plot of Inside Out concerns itself, in a Pixar first, with a world not built on any fantastic assumptions about corporeal reality. There is only Riley, a normal 11-year-old girl from Minnesota with a healthy relationship to her parents. Up to this point there have been no major conflicts in Riley’s life, save for the occasional rough hockey match. Things get a bit more complicated when Riley’s dad gets a new job on the West Coast, and life as she knows it is uprooted. Both parents share concern over Riley’s struggle to adjust to new surroundings, and with the subtle changes in her personality that signify the passing of childhood.

This remarkably normal human drama serves as a launching pad to explore the complex network of emotions underlying every life decision, however small. We spend the majority of the film at the controls of Riley’s mind, where a team of colorful sprites representing five major emotions (Joy, Anger, Fear, Disgust, Sadness) take unequal turns at the helm. While it plays like fantasy, older viewers will revel in the pure metaphor of the central adventure: Joy (Amy Poehler) clashes with Sadness (Phyllis Smith) for preeminence and end up temporarily lost; the remaining emotions, Fear (Bill Hader) Disgust (Mindy Kaling) and Anger (the perfectly cast Lewis Black) try their best to fill in the gaps and mimic normality, but end up producing sarcasm.

In setting its main stage as the human brain, Inside Out unlocks the vast narrative potential of a world that can be equal parts comic, wistful and outlandish. Children will delight in the diverse scenery and dream-logic of locales that alternately resemble a museum, an amusement park, a zoo and a haunted house. There are many elements indebted to Dr. Seuss in the feverish whimsy used to portray Riley’s memory fields, from the literal train of thought operated by memory cleaners (who often hold onto useless memories like TV commercials for fun) to an imaginary friend that’s been hiding in the subconscious (a character straight out of Horton Hears a Who!). In that respect, the film feels like a classic throwback to the Jungian landscapes of Seuss’ best work (Oh, the Places You’ll Go! rings a few bells, as does the lesser known 5,000 Fingers of Dr. T). 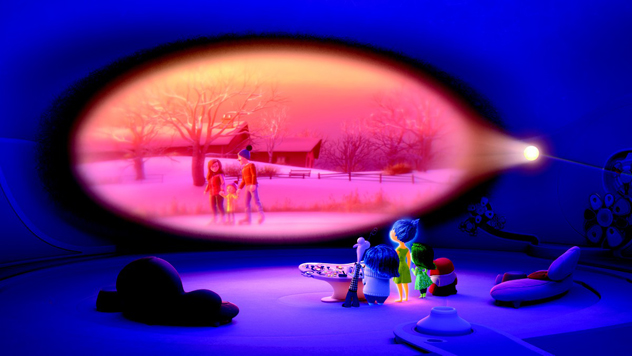 For all the energy with which Inside Out brings the imagination to life, the real triumph comes when directly tackling the emotions themselves, specifically the central duo of Joy and Sadness. After initially planning to pair Fear with Joy as a more comical choice, the filmmakers finally settled on bringing Sadness to the forefront, a risky move for a children’s film in this day and age. More than getting a crucial role, the complex, frumpy and perpetually blue character gradually comes to share the title of protagonist with Joy, who struggles to see the useful purpose of crying, negative emotion and especially memories that are anything but joyful. It seems like a corrective to much of the relentlessly upbeat films in the canon (Disney, Children’s, Hollywood, you-name-it) to show the two emotions for better or worse as a solid partnership, with equal responsibilities and an equal tendency to wreak havoc if left to their own devices.

When leaving the film, I felt that Inside Out might be worthy of a sequel or two, not for the sake of revisiting beloved characters as Toy Story 3 or Monsters University have done, but just to look further into the tantalizingly infinite worlds it has opened up. There are a few hints to this effect—a scene highlighting the different emotional approaches between Riley’s mom and dad (the mom’s mind resembles an open-discussion format show a la The View, the dad’s a security control room). The fact that Riley is on the verge of young adulthood opens up countless avenues to explore the personality.

Then again, this leap into the most personal of adventures—the development of our inner character—might suggest too many possibilities to contend with, especially outside the less hazardous boundaries of childhood. It is enough that Pixar has succeeded this time around, and has produced the most oddly affecting outlier in its filmography to date.