USE YOUR BRAIN (OR DON’T)

In the distant cinematic landscape of the late ‘90s, the model blockbuster resembled something like Luc Besson’s eye-popping The Fifth Element: Fizzy, over-the top and hyper-kinetic, with low emotional stakes and irresistibly junky dialogue. Even though sarcasm and postmodern reflexivity had already saturated Hollywood, the idea of having fun, even mindless fun, at the movies was still cool, almost sacrosanct. Then, for a long time, it wasn’t.

Today, the tiresome trend of the “serious” blockbuster that felt refreshing 10 years ago is finally beginning to hit a brick wall. In some spots, it’s breaking on through to the other side. Last summer’s Pacific Rim is a good example of a big-budget film that embraced its own ridiculousness and still packed a thrill. While Lucy is not nearly as successful or coherent as that picture, and not entirely as fun as the movies director Besson made in the ’90s (Lèon still remains the best), it represents a step in the right direction. Lucy is the film equivalent of orange soda; quickly enjoyed, easily forgotten, but fun while it lasts. In the hands of another director, it could have been another Transcendence, self-serious and fully sold on its pretensions. In this case, it has the undercurrent of Besson’s hallucinatory wackiness that always keeps it a tad unpredictable from beginning to end. This unpredictability is what keeps the viewer, against their better judgment, from being altogether disappointed.

Scarlett Johansson, like all good action stars, gives a professional, grounded performance as the title character, Lucy, whom we first see as a hard-living party girl living in Taipei with her euro-trashy, drug-running boyfriend. After he tricks her into delivering a mysterious platinum briefcase to a Korean crime syndicate headed by Jang (a wonderfully psychotic Choi Min-Sik, perhaps channeling his inner Gary Oldman), she begins tumbling down a rabbit hole of impossible set pieces. First, she’s forced to transport the contents of the case (a bag of mysterious purple crystals) in her lower abdomen, supposedly to sell as a drug to college students in Europe. When the bag begins to leak into her system, we learn that the so-called “drug” is less of a recreational substance than the key to unlocking the human potential. 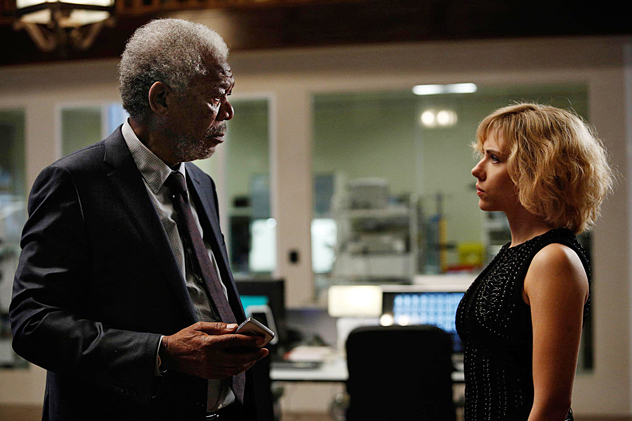 It turns out that the “purple stuff” is allowing Lucy to access previously unused portions of her brain, turning her from a bewildered hostage to a super-efficient killing machine in a matter of seconds. She soon escapes, and with Jang and his heavily armed crew hot on her tail, she begins a worldwide quest to find and use the remaining crystals in order to fuel her trans-human “high.” Her increasingly trippy antics—climbing up walls, tearing off her skin in an airplane bathroom and having an awkward phone conversation with her mom about remembering her own birth—are interspersed with a delightfully absurd academic symposium held halfway across the world by professor Morgan Freeman, who explains to the audience in his trademark intonations how brainpower can lead to superpowers while a slideshow of animated dolphins plays behind him. Magnifique!

Lucy is at its most entertaining during these surreal, borderline comedic moments, and the requisite car chases and shootouts we just know are coming seem redundant (kind of a drag, really) in comparison. It’s as if the film is trying to decide whether it should be a chase film featuring an ass-kicking heroine or an LSD-fueled sci-fi epic somewhere in between 2001: A Space Odyssey and a Sony PlayStation commercial. As the climax nears, one begins to feel that the movie is trying unsuccessfully to tear itself into these two directions. Early on, Lucy becomes too omnipotent to deliver a good fight scene, yet the action sequences seem to take place of their own accord, whether Johansson is on screen or not. 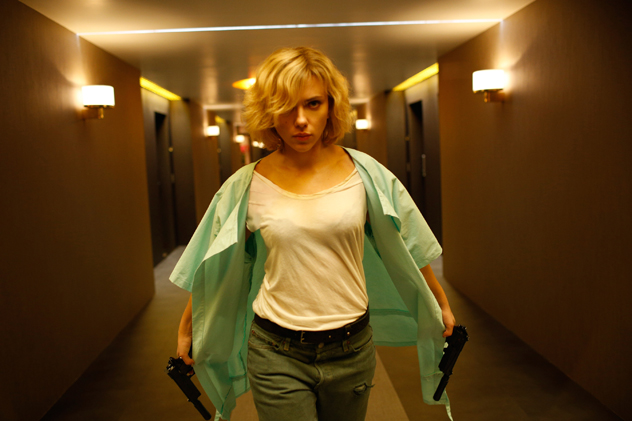 As Lucy comes ever closer to reaching 100 percent of her brain’s capabilities, she becomes increasingly distant, inhuman and therefore un-relatable (due to no fault of Johansson). In the past, Besson has used the motif of the vulnerable/invincible woman as a way of upping the emotional punch in an action film. Just watch the great performances of Anne Parillaud in Nikita, Natalie Portman in Lèon or Milla Jovovich in The Fifth Element to get a sense of what I mean. What seems to be missing in Lucy is the vulnerable half of the equation, which disappears early on and leaves us nothing to hang on to in terms of plot. The audience must make do with the intense visuals and unconventional cuts that keep popping on and off the screen like segments from a bizarre, overly expensive music video.

If you aren’t bothered by mindless diversions and want to sidestep some of the more grim and overwrought summer films this year, then you couldn’t go too wrong with Lucy. But if you want the real deal, I’d go rent some of Besson’s earlier movies, preferably The Fifth Element on VHS, and watch it at home. On your VCR. Now that would be fun.