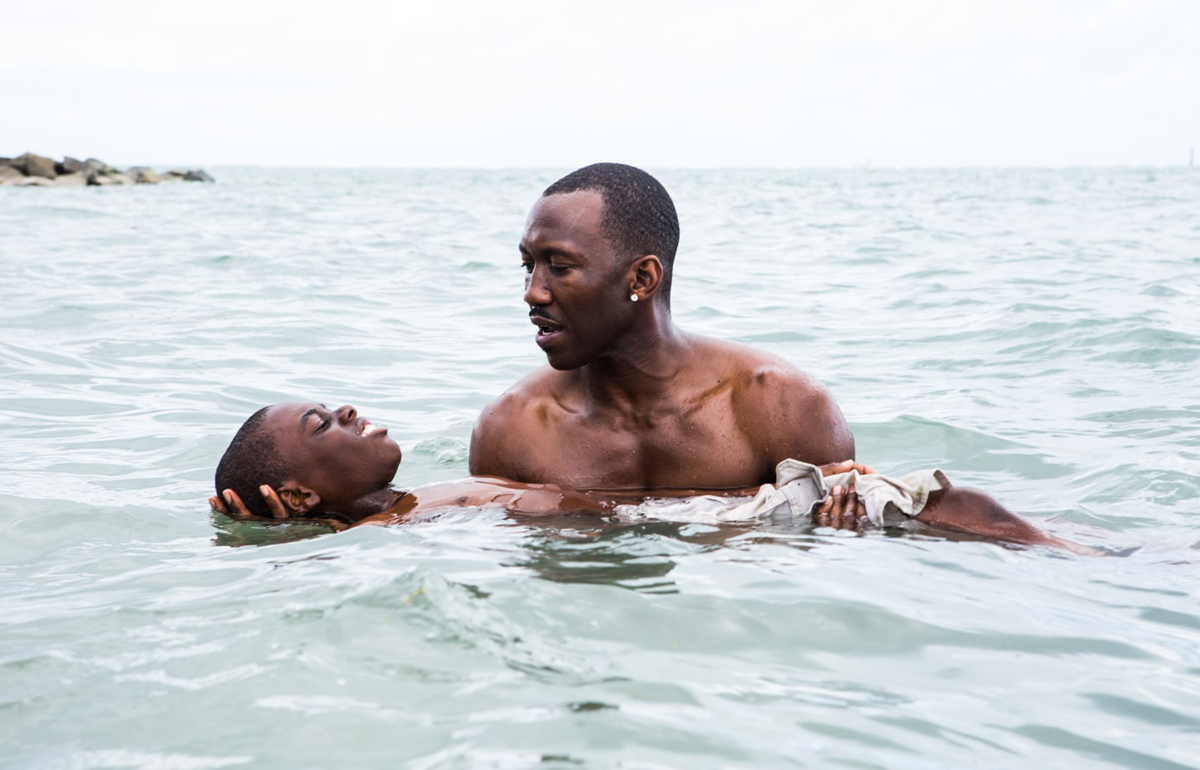 Moonlight may shine particularly in a certain context—blackness, queerness, masculinity, the backdrop of inner-city Miami, the supercharged sociopolitical climate of 2016—but the most radical breakthrough of Barry Jenkins’ second film is its patient dedication to revealing the most vulnerable, transitory moments in an individual’s life. It is neither a romance nor a coming-of-age story, but a portrait of how fragile our sense of self is between childhood and adulthood; how carefully it blossoms with trust, how swiftly it wilts under cruelty; and how rare it is to find the least bit of solace in our lifetime. It has already received widespread acclaim and possible major award-nods, but it plays best as the understated, empathetic parable it is.

Like a sonata, the film is played as a solo piece over several movements, with some brief accompaniment by figures that move in and out of the life of the main character, Chiron.

We follow his shifting identities over three life-defining moments, each at a different age, each portrayed by a different actor. As a preteen, he is “Little” (Alex Hibbert), a sensitive child of few words who is gradually befriended by Juan (Mahershala Ali), the neighborhood crack dealer, after he is found hiding from bullies in a neighborhood “dope hole.” Juan is played less as a tragic cypher for social ills than a flawed, but caring, man. We, along with Little, get to know his character, that of his kind-hearted girlfriend Teresa (Janelle Monàe), and that of Little’s fraught, alternately concerned, alternately cold mother, Paula (Naomie Harris) before realizing what’s going on. Paula is slowly becoming an addict; in the traditional sense, she is a victim, and by default, Juan should be seen to be the predator. Instead, we see how Juan and Teresa provide a nurturing environment while his own home becomes hostile. Where a hood film provides case studies, Moonlight provokes unanswerable questions.

Over the next two acts, we see the wiry, vulnerable Chiron (Ashton Sanders) become the hardened, but incomplete “Black” (Trevante Rhodes). As a teenager, Chiron is starting to become trapped by the labels provided for him and the deteriorating relationship with his mother. To a relentless group of boys at his high school, he is a “faggot,” mostly due to his shy demeanor and slightly less-baggy jeans—he has not yet tackled his own sexuality. There is one person his age, Kevin (Jharrel Jerome), who shows him with a degree of friendliness. A brief but impactful moment of intimacy shared between the two at the middle point of the film (on a moonlit beach) gives way to a betrayal that swiftly brings the curtain down on Chiron’s youth.

Years later as “Black,” Chiron has rebuilt himself somewhat in the image of his childhood role model Juan, making a fairly decent living “trapping” in an Atlanta neighborhood. He has learned to hide his sensitivity behind a gold grill and his skillful intimidation of subordinates in the game. In another film with the same setting, the story would dead-end in tragedy, but this third act provides an opportunity for reconciliation: Chiron gets an out-of-the-blue call from an adult Kevin (André Holland), answers it and soon takes the drive back down to his old neighborhood.

As was mentioned, Moonlight is not a romance, though it provides romantic possibility; it is not a coming-of-age, for we never see Chiron fully realize himself. Though it highlights moments of tragedy and hope, it refuses to guide us toward any conclusion or judgment. It merely works quietly and persistently in creating empathy for the lives being shown. A review I read recently in a Christian publication confirmed this potential effect; those in conflict with the themes of sexuality and drug use can still not help but relate with these characters. The backgrounds and choices of these and all people aren’t created in a vacuum, and there, but for the grace of god, go all of us.

It is a small story made epic by our close relation to the inner triumphs and turmoil of Chiron, the classical music score that subtly evolves over the course of his life, the textured immersivity of its South Florida setting and the still-relative rareness of the type of story being told. We are at the beginning of a long-overdue renaissance of underrepresented people in films that are mostly free of political oversimplification. Last year’s Tangerine, centered on two black, transgender sex workers in Los Angeles, was not “about” black, transgender sex workers in Los Angeles. It merely dropped us into their experience. Moonlight, like the best of dramas, does the same.