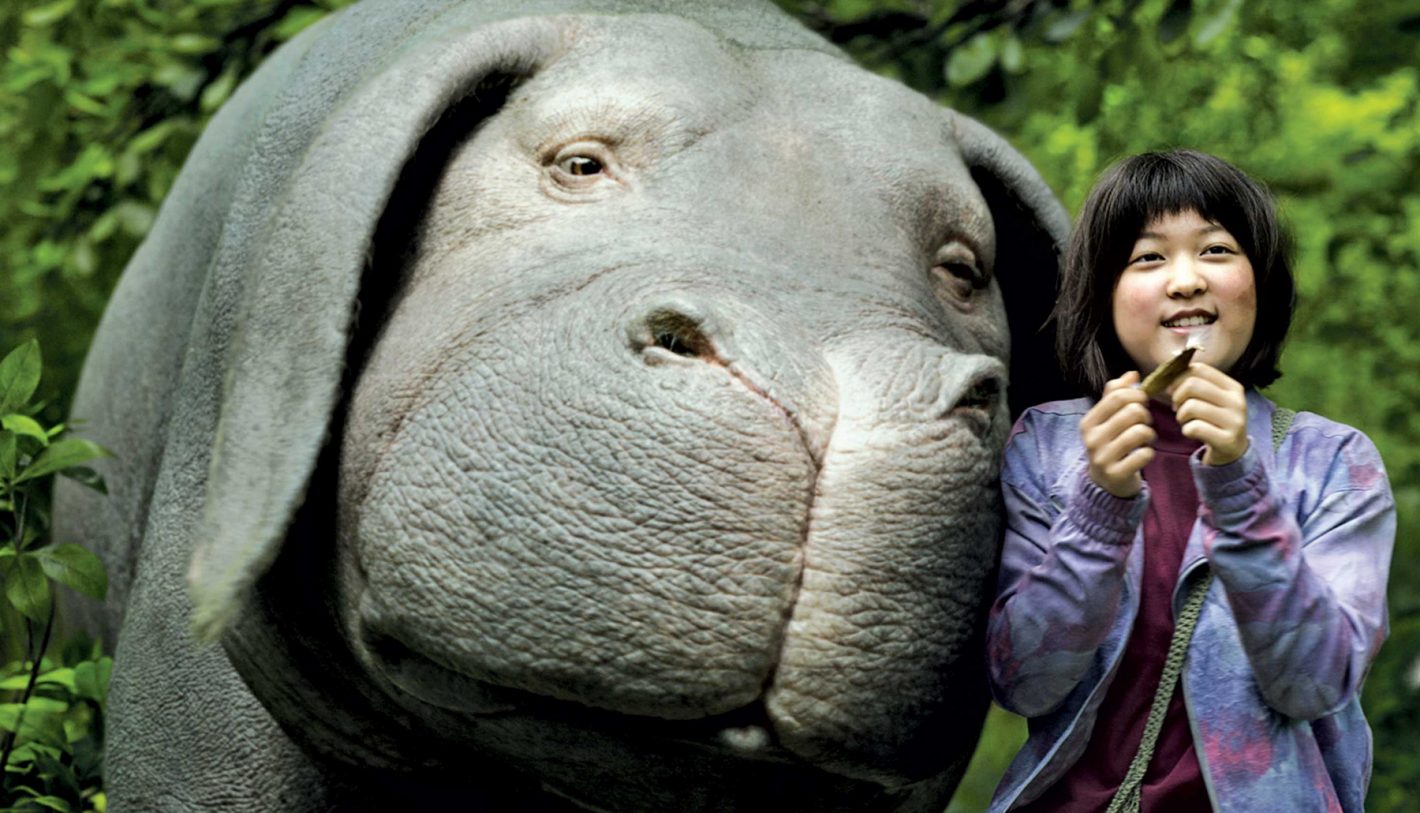 Part PETA polemic, part Upton Sinclairian socialist parable, part My Neighbor Totoro, with a dash of dark experimental ensemble comedy, Okja is all the more entertaining for its imperfections. It’s exhilarating to see that ultimate rarity—a tonally chaotic, risk-taking, unpredictable and engrossing picture that works in service to the span in which it is watched, instead of punching in the clock to construct a franchise or extended universe. It’s a film that doesn’t give a damn whether it fits cleanly into four-quadrant mediocrity. Like its title creature, it is simultaneously cute, grotesque, tragic and ridiculous, and no matter how far off-the-mark it may roam, it is confident that it belongs to someone, and that someone will love it all the more strongly for being strange.

In a disturbingly comical prologue, we’re introduced to a simpering, brace-faced biotech CEO (played with relish by Tilda Swinton, also in a dual role as her own “evil” twin) who unveils her company’s plan to end world hunger—a new miracle livestock animal known as the “superpig.” In a winning PR move to save face for the company’s years of evil practices, she holds a worldwide contest, letting 26 farmers in 26 countries try their hand at raising the biggest and healthiest superpig for a grand unveiling 10 years hence.

The present-day interlude that follows is a much-needed calm before the bizarro storm to follow, as preteen Mija (Ahn Syeo-hyun) wanders the idyllic forests and mountainsides of Korea with her constant superpig companion Okja. Her puckish grandfather knows that time is running out for the equally massive and docile pet (somewhat similar to a genetically engineered Eeyore spliced with hippo and manatee DNA), and is hoping to sweep the issue under the rug until the last minute. 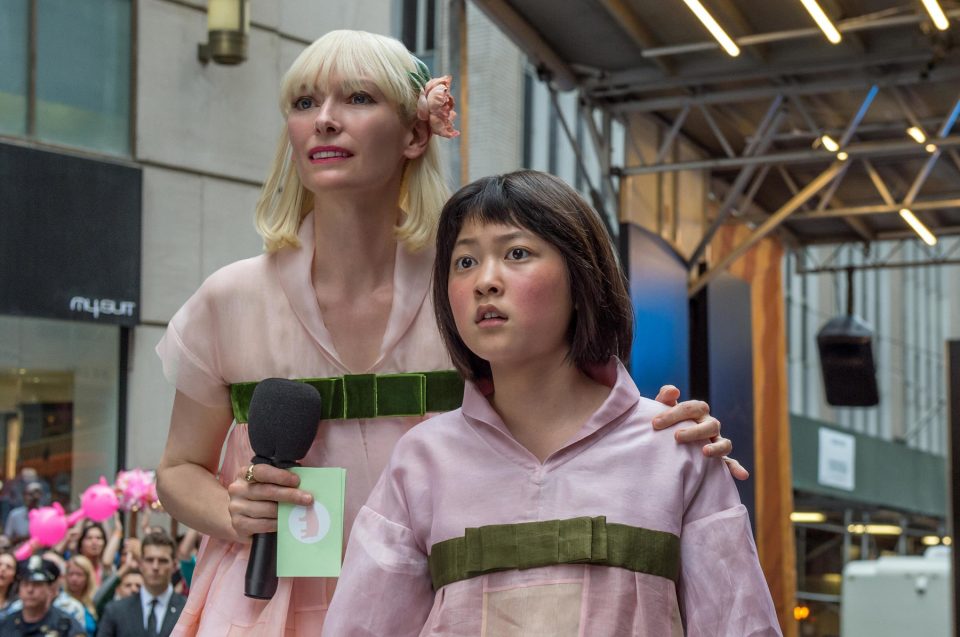 Once the Mirando (read: Monsanto) company field team arrives, headed by a deranged, alcoholic, kid’s wildlife show host (Jake Gyllenhaal, channeling Jim Carrey’s Ace Ventura one octave higher), the pooch is screwed, and Okja shifts gears into an emotionally unglued madcap chase that doesn’t let up until the film’s conclusion. Mija becomes a one-girl army intent on pursuing her captive superpig to the ends of the earth, from downtown Seoul to Times Square, and a slew of corporate office mazes and grimy slaughterhouses in between. On the way, she falls in with a ragtag group of militant (yet pacifist) animal liberation activists headed by Paul Dano and The Walking Dead’s Steven Yeun that live by their credo at all costs, one going so far as to cut almost all vegetables out of his diet. One is never sure who, if anyone, is being mocked, but everyone involved, save for the steadfast Mija, is played for full camp potential.

It’s an adventure that ranges from the charming to the shocking; never fully doubling down on its anti-meat industry stance enough to become a full-blown PSA, at its best, it allows one to question our own societal infatuation with cute animals versus our casual disregard for livestock, and indeed there are few arguments that can point out any fundamental difference between the two.

Avoiding the pitfall of sacrificing entertainment for heavy-handed lambasting, Okja is content to exude a broader, generalized, anticapitalist sentiment of the sort commonly employed by successful artists in the free world without a lick of irony. In director Joon-ho Bong’s last dystopian fable, Snowpiercer, a vast train with the rich in front and the proletariat in the rear became a metaphor for class struggle. Here, the message is less clear, but it is possible to derive some merit, even if you’re unsure how meat production is a specifically capitalist phenomenon. 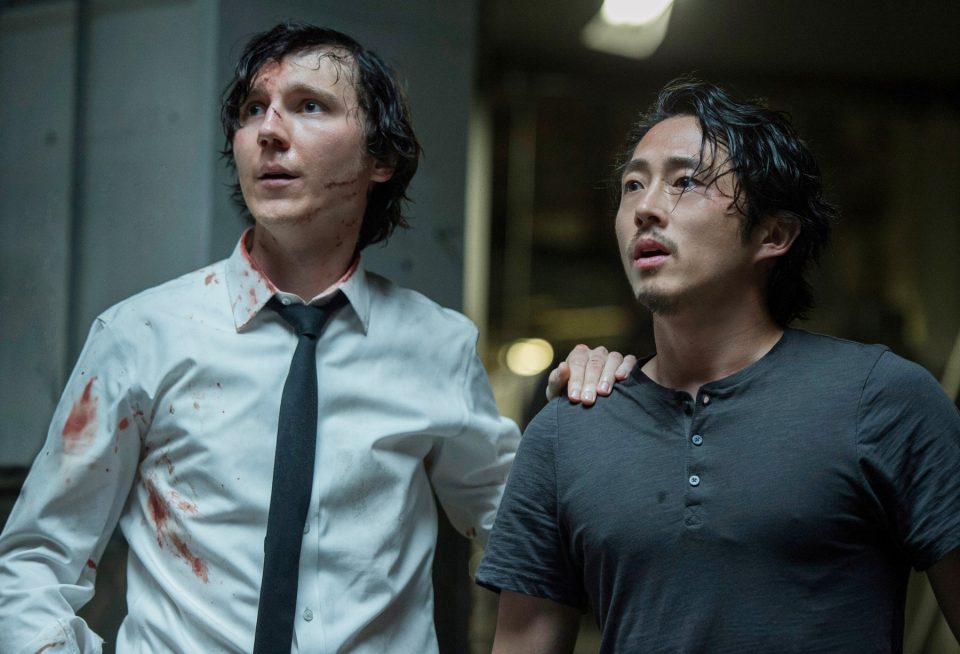 One could say that another major hero in this story is the rising free-market juggernaut Netflix, which has sidestepped the dated Hollywood mode, by whose standards Okja may have been a mis-marketed flop, to allow exciting, idiosyncratic productions like this one to find their fanbase quicker than ever before. (At Cannes, the film’s Netflix logo was booed; like a great deal many other things, the French consider it an affront, this time to the government-supported domestic film industry).

There’s little to lose in adding this to your queue. Joon-ho Bong is an intensely inventive director who juggles the light-hearted and the macabre with ease, and whose vision has lost nothing of its character in his two non-Korean productions. Like all great pets, Okja is full of mischief, a little bit of poo and a whole lot of love.