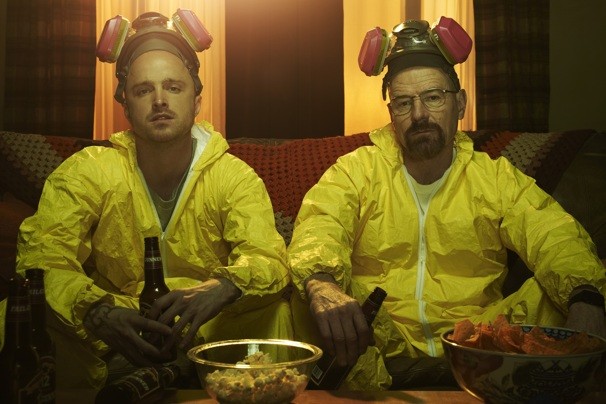 On Sunday, we said goodbye to another great television series, Breaking Bad. It’s funny how we mourn the passing of our favorite TV shows the way we do our most beloved people. We do so with heavy hearts: There’s sadness, confusion and, eventually, acceptance. Sometimes people fall into denial, you know, like, “OH! I’VE HEARD THEY’RE GOING TO MAKE A MOVIE!” As if the brief two hours or so of a feature-length film could somehow recapture the same feeling of all that time you spent with the multi-season span of your favorite TV show. As Jud Crandall intoned in Pet Sematary, “Sometimes dead is better.” I know, it’s time to move on and find something else to Facebook about, but I’m going to have a difficult time with this one.

For the binge-watchers out there, don’t worry. I’m not going to post any spoilers (mainly because I’m writing this before the final episode airs). But through the magic of print media, we’re just going to imagine we’re in the post-Breaking Bad world. We’re left to wonder why this show without any hot-looking stars was so successful.

Maybe it’s because Breaking Bad is such an American story. You have Walter White, a talented, brilliant man who can’t catch a break—perhaps like so many students currently facing college graduation. He was never able to realize his potential. He works as a chemistry teacher, a job that may have easily supported a family just a decade or two ago, but now forces him to work a shitty part-time job at a car wash. Then he gets sick. Lung cancer. Not only is the diagnosis terrible, but what’s worse, how is he expected to pay the exorbitant medical costs? Out of desperation, he uses his chemical know-how to start cooking meth. It’s not the smartest idea, but it sure is lucrative. Unfortunately, once he strays from the straight and narrow path, White is unable to turn back. A small lie begets a bigger lie, a small criminal enterprise becomes an elaborate cartel and White himself begins changing from an earnest family man to a completely ruthless monster.

There’s a lot of things that make this an American story. First, of course, in light of the recent battle between congressional Republicans and Democrats over the Affordable Care Act, Breaking Bad could be seen as a cautionary tale. What could go wrong when we as a society deny our citizens easy and affordable access to a basic human need? Well, I’d imagine most of them wouldn’t turn to cooking meth in their tighty-whities, but they might end up doing other bad things like stealing cable or pirating movies and music on the Internet. These things might not be awful, but they do harm the economy, which really harms all of us, right?

Also, it’s about meth, and there’s nothing more American than meth. It’s a drug that combines a whole host of unnatural chemicals to produce a feeling of euphoria—sort of like a Big Mac. It’s cheaper than healthcare, too, and probably a lot more immediately satisfying. I haven’t tried meth, but I’ve been to a hospital, and anything’s gotta be better than going to a hospital. The first time I heard about meth, I was riding the Greyhound from Oklahoma City to Napa, Calif. Some dude I’d become friendly with on the trip told me about it. I was outside having a cigarette at a stop in Flagstaff, Ariz., and he bummed one from me. He’d asked me if I knew where in the city he could buy some good “crystal.” I’d never heard of crystal before, but I figured he was talking about drugs. I told him that I was from New York and had never been to Flagstaff before, so I didn’t have a good hook-up that I could pass on to him. He asked me again if I knew where to buy good crystal in Flagstaff and I reiterated that it was my first time in the city. This went on a few more times, like we were stuck in a time loop. Eventually, I think he figured out that I wasn’t able to help him, and he acquiesced with, “I heard they had good crystal in Flagstaff.” Apparently, the crystal wherever he was from wasn’t so bad either.

Finally, Breaking Bad is really a version of the American Dream. White, a small-time businessman, begins cooking meth in an RV somewhere on the outskirts of an American Indian reservation in New Mexico with his flunky assistant Jesse. He makes an artisinal niche product of very high quality. As he expands his business, collateral damage occurs. People die, sure, but the product is getting out there and gaining a real strong following. To keep up with demand, bigger players have to get involved to step up production and distribution. These people are way more evil than White, and though he’s at first turned off by their methods, the results are there. His little-meth-that-could is now a huge player on the market. So, OK, some more people die, but it’s for the greater good. Eventually, White makes more money than he could ever dream of, so he passes his business off to someone else. The quality’s not as good, but, hey, he’s already rich, and really, isn’t that all that matters?

In other news: I swear I’m not a cynic.