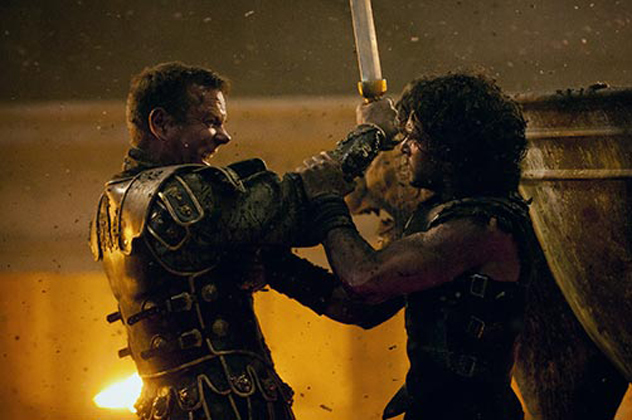 There’s an old adage that goes, “Tragedy plus Time equals Comedy.” It actually holds true most of the time…unfortunately, I can’t think of any good Mount Vesuvius jokes. Maybe it’s because it happened so long ago. In any case, the epic volcanic eruption in the mid-first century A.D. that wiped out the Roman city of Pompeii has endured as one of the most awesome natural catastrophes in human history. Luckily for us it makes for a pretty exciting movie too; mostly because it happened so long ago, we couldn’t possibly know anyone who was affected by it.

The antiquity of the story works out well for director Paul W.S. Anderson and his screenwriters as well, because it leaves them free to take plenty of liberties and create characters and scenarios that have only a tenuous bond with reality. Check this one out: a young Celt child, Milo, watches as his family and tribe are slaughtered at the hands of a power-mad Roman senator, Corvus (played by a wickedly schmaltzy Kiefer Sutherland). Young Milo is believed dead, but ends up climbing out of a pile of his brethren’s bodies after the smoke clears and the Romans exit. Alone, he tries to survive in the wilds of Britannia but is captured by a different group of baddies.

Seventeen years pass in the blink of an eye, and suddenly we’re in Roman settlement Londinium, which is now London. Right away we see even in ancient times, the weather there sucked. Rain pours down in some back alley gladiator coliseum. Blood forms into a puddle on the floor, and a ramshackle group of spectators cries out for more. Among them is the slave trader Graecus (Joe Pingue), looking bored and yearning for the milder climes of the Mediterranean. He’s there to see a combatant dubbed “The Celt,” who’s said to be the best around. The Celt is, of course, young Milo, now all grown up and played by a well-muscled Kit Harington (Jon Snow from Game of Thrones). Milo dispatches his foes with a quickness and Graecus’ eyes light up with dollar signs…or whatever currency the ancient Romans used.

Milo is brought to Pompeii for The Vinalia, a festival to celebrate the wine harvest. In transit, he encounters Cassia (Emily Browning), a lady of good standing from a wealthy Pompeiian family, returning home from Rome. The two instantly fall in love, we assume, because she’s a babe with a heart of gold, and he’s a horse-whisperer with rippling abdominals. But how can they be together when society is designed to keep them apart? Sigh.

Cassia isn’t the only person of interest in Pompeii for The Vinalia. Milo also meets and forges a strong bond with fellow gladiator Atticus (Adewale Akinnouye-Agbaje), a grizzled champion who believes he will earn his freedom after his next victory and, wouldn’t you know it, Senator Corvus, who’s still a total dick after all these years.

Amid all this human drama, you might be wondering where the volcano is. Well, it’s there, but it takes a backseat for much of the film. Sure, it rumbles a few times and spooks a couple of horses, but mostly we’re focused on the unfortunately flimsy characters.

It’s a pretty run-of-the-mill plot. Corvus has his eyes set on Cassia, the only thing his power and influence hasn’t been able to obtain; meanwhile, Milo seeks revenge for the loss of his family. It’s mildly compelling at times, but really, where’s the goddamn explosion? I want to see stuff slathered in molten lava.

Luckily there’s plenty of action. Anderson, the man who brought us the Resident Evil movies, is really adept at making fight sequences look really flashy, and the bare-bones, sword-to-shield dust-ups look great here. And when Vesuvius finally unleashes its unholy wrath on the unsuspecting Pompeiians, it’s pretty ferocious. Flaming rocks explode as they hit the ground; stone rain pummels confused townsfolk; a giant tidal wave destroys a harbor; volcanic ash falls like deadly black snowflakes, covering everyone in soot; and then the kicker…molten-fucking-lava! Don’t worry: it’s OK to cheer as Pompeii breathes its final breath. Anyone who’d be offended is long gone by now.