My parents never sent me away to camp when I was a kid, and I’m grateful to them for that. I don’t deal well with sleeping in bunks or bugs, and I assume every vine I see is poison oak, ivy or sumac. But if I had gone to camp when I was a kid, which was way back in the ‘80s, would my experience have been anything like what is portrayed in David Wain and Michael Showalter’s Wet Hot American Summer: First Day of Camp? These are questions journalists must ask themselves.

The answer is most likely a resounding no, because the events depicted on this brand new Netflix Original series are completely bonkers.

The series is a prequel to the film Wet Hot American Summer, which was something of a cult hit, though poorly received. Released back in 2001, Wet Hot American Summer featured many young actors who went on to become stars, such as Bradley Cooper, Paul Rudd, Amy Poehler and Elizabeth Banks, all of whom return for First Day of Camp.

The series, like the film, boasts a huge ensemble cast with numerous ridiculous plotlines, and Wain and Showalter are adept at handling them all. The duo first received recognition back in the ‘90s as part of MTV’s groundbreaking sketch comedy show The State, which featured irreverent humor with a surrealist twist. All these years later, Wain and Showalter’s absurd sensibilities seem as fresh and wickedly sharp as ever, as First Day of Camp would attest. 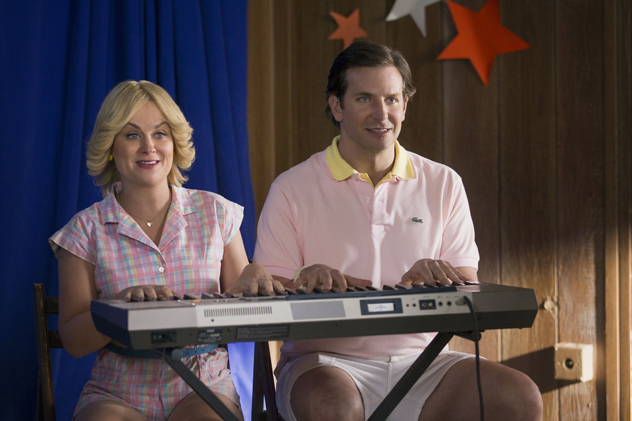 Having seen the original film isn’t a prerequisite to enjoying the series, but it would help, seeing as all of the adult actors, though they are 15 years older, reprise their original roles of teenage camp counselors at Camp Firewood in rural Maine. The year is still 1981, and there’s a lot of crazy shit going on in this patch of New England forest. Everyone asks the questions: Will Andy (Rudd) ever hook up with Firewood’s most babelicious counselor Katie (Marguerite Moreau), even though she’s dating that preppy douchebag Blake (Josh Charles) from rival Camp Tigerclaw? Are doofy but lovable Coop (Showalter) and mega-fox Donna (Lake Bell) really boyfriend and girlfriend? Why have Ben (Cooper) and McKinley (fellow State alum Michael Ian Black) been spending so much time together?

But Camp Firewood faces threats far greater than raging teenage hormones. The camp has fell upon hard financial times and is in danger of closing. To save it, camp director Mitch (H. Jon Benjamin) has has to strike a deal with Xenstar, an evil super conglomerate that is now dumping toxic waste in the woods. Only head counselors Greg (Jason Schwartzman) and Beth (Janeane Garofalo) can do anything to stop it. They have their work cut out for them, though, as the Xenstar conspiracy goes deeper than anyone could have ever dreamed, reaching all the way to the president himself, Ronald Reagan (wonderfully lampooned by Showalter).

There’s also a camp musical that has to be cast, rehearsed and performed before day’s end. Ben and his “girlfriend” Susie (Poehler) have enlisted renowned Broadway actor/director Claude Dumet (Mad Men’s John Slattery) to find two diamonds in the rough to assume the starring roles. In the process, a love triangle forms (actually a love quadrangle once McKinley enters the mix). 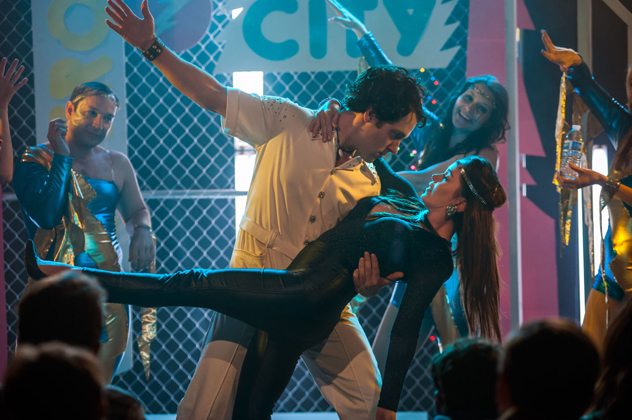 Elsewhere, mysterious-yet-alluring new counselor Lindsay (Banks, who doesn’t get enough credit for her comedic abilities) has been snooping around and asking questions about the haunted shack that just so happens to be in the middle of the campgrounds. She’s been asking questions about the reclusive rock star who’s said to inhabit the ramshackle dwelling. Just what is she after? Why won’t she leave well enough alone?!

If it sounds like there’s a lot going on, that’s because there is. Showalter and Wain have a lot of story to tell in just eight half-hour episodes and a lot of characters at their disposal. Through the first two installments of First Day of Camp, the series feels a little directionless, and it seems as if plot is going to take a backseat to bizarre hijinks, but by the third episode, after Mitch’s shocking transformation is revealed, the series becomes delightfully plot driven (without sacrificing the hijinks).

First Day of Camp is a series that will probably benefit from multiple viewings, after your initial binge-watching, as the comedy is so deadpan and fast-paced, that you’ll probably miss something the first time around. Though it was slow to get going (which is a bit of a drawback considering its short length as TV series go), once it does, it packs quite a punch, and the extremely talented cast (which also includes Jon Hamm as Reagan’s top assassin and Christopher Meloni as the camp chef with a shady past) seems to be having a blast. You most likely will, too. Now I wish my parents had sent me to camp as a kid. Maybe it’s not too late … MOM!