It’s time to give George Lucas his due. He has done pretty well for himself after all. And yes, I know there are a lot of you nerds out there who are still bummed that the lackluster prequels were more hype than substance (hey, I’m one of them too), but let’s cut him some slack. He created Star Wars for crying out loud! Chewy, Han, Leia, Luke, Vader, frickin’ Yoda … each one is a household name and captured the imaginations of many an American youth, myself included. Lucas’ amazing characters no doubt nurtured the creativity of J.J. Abrams as well, who has successfully bridged the Star Wars franchise into a new generation with The Force Awakens.

The film is grounded in a delightfully simple premise: Where in the universe is Luke Skywalker? Many years have passed since Return of the Jedi, and though the Empire is no more, the Dark Side of the Force has licked its wounds and is on the rise once again, this time under the guise of The First Order. Resistance forces led by General Leia Organa (yes, formerly Princess Leia, played by the incomparable Carrie Fisher) are all that stand in The First Order’s way of toppling the Republic.

Luke, the last known Jedi, has disappeared for mysterious reasons, and both sides are furiously trying to find him to no avail. However, clues to his whereabouts surface on an otherwise inconsequential desert planet of Jakku. A map to Luke’s location has been entrusted to a ridiculously adorable droid (BB-8), who happens upon a scruffy-but-gorgeous scavenger (Rey, played by newcomer Daisy Ridley) with a fragmented past, spawning an action-packed space caper of epic proportions.

Sound familiar? That’s because it is. The parallels between The Force Awakens and Episode IV: A New Hope are pretty plain to see. Abrams and his screenwriting partners Lawrence Kasdan and Michael Arndt seemed to be content with sticking to what worked, and the good news for them is it still does. Seeing Han Solo (Harrison Ford) and Chewbacca (Peter Mayhew) reunited after all these years on the big screen was a huge treat; a visit to an alien bar, loaded with colorful characters, hearkened to that famous scene in the Mos Eisley cantina; watching the Millennium Falcon soar at warp speed and take on TIE Fighters, even though it looks like nothing more than an interstellar hooptie, still leaves me with the feeling that anything is possible.

But it’s the new parts that made The Force Awakens such a joy to watch. Ridley’s Rey is a heroine who’s easy to root for, a perfect mix of vulnerability, humor and bad-assery. She’s well-suited to create a new icon for a new generation of fans. Joining her is another relative unknown, John Boyega, who takes us beneath the helmet of a Stormtrooper as Finn. Taken from his family as a youth, Finn was stripped of any identity, and cloaked in the iconic white armor of The First Order, but he never lost his humanity. After witnessing his army commit a horrible atrocity on Jakku, Finn helps Resistance pilot Poe Dameron (Oscar Isaac) escape from The First Order’s clutches. Boyega is hilarious at times in his role as a burgeoning, lovestruck young hero who’s in a bit over his head. 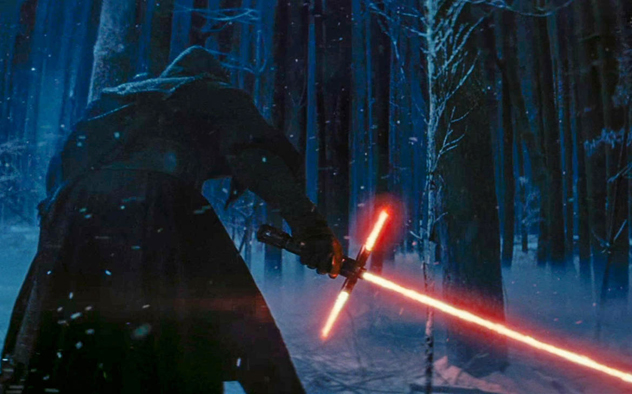 No Star Wars movie would be complete without a strong villain, and The Force Awakens is no exception. Adam Driver dons the dark cloak and mask of Kylo Ren, a wielder of The Force who has been seduced by the Dark Side. Driver’s voice is almost devoid of emotion as Ren; however, his expression and demeanor creates a character easy to sympathize with. During an epic showdown against Rey in the snow, the two actors create a struggle that not only feels like a broad battle of good versus evil, but something much more intimate and personal.

Abrams and company thankfully didn’t decide to make a darker or grittier relaunch of the Star Wars franchise. The Force Awakens is something you can take your kids to, that both young and old will enjoy. It follows the the blueprint Lucas laid out in the original trilogy, and maybe even improves upon it. Still, none of this would’ve been possible without the man himself, so thanks, George, for everything.