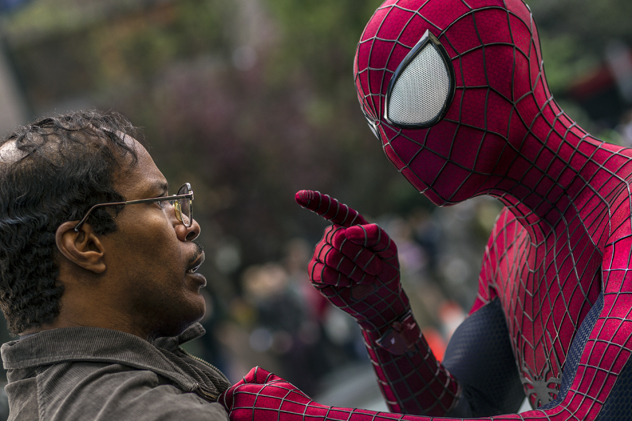 You can’t toss a dead cat without hitting a movie based on a Marvel Comics character nowadays. I’m not complaining, mind you. I’ll go see just about any superhero movie they toss out there. I saw Green Lantern. Twice. (And yes, I know that’s DC.) But Spider-Man will always hold a special place in my heart. He was my first favorite superhero, perhaps because I was a nerdy kid who got bullied by the other kids and couldn’t get the girl, and I saw something I could relate to in the science-minded photography geek, Peter Parker (Spidey’s alter-ego), who got bit by a radioactive spider and instead of just getting a really bad rash, was imbued with superpowers that allowed him to not only stand up against his tormentors but stand up for truth, justice and the American way.

Fun fact: This is the fifth Spider-Man movie since the dawn of the new millennium. Five! That’s a kind of run that would make Freddy Krueger or Jason Voorhees jealous.

But on to the movie: in this sequel to 2012’s reboot of the franchise, The Amazing Spider-Man, Andrew Garfield is once again behind the mask as everyone’s favorite web-slinger. With a few years of crime-fighting under his belt, he’s more show-y and wise-cracking than ever. In an elaborate opening action sequence, Spidey swings high above the streets of New York City in pursuit of Aleksei Sytsevich (an almost unrecognizable Paul Giamatti), a Russian mobster who has hijacked an Oscorp tractor-trailer carrying vials of plutonium. Though the police are hot on Sytsevich’s tail, they’re having a difficult time corralling the mad Russian crook…of course, that’s where your Friendly Neighborhood Spider-Man comes in.

This sequence is awe-inspiring. As Spidey soars from building to building in a succession of acrobatic flips, the scene below is pure chaos: gunshots flare, cars collide into one another, etc. The dichotomy of the almost serene shots of Spider-Man gracefully gliding along, intermingled with the severe road rage on street-level, is a real treat for the eye. The intercutting of Peter Parker’s personal life in this opening scene just sweetens the pot. It’s graduation day, and Peter, as he’s clinging to the grill of a police truck, answers a call from Gwen Stacy (wonderfully portrayed once again by Emma Stone), who is about to deliver her valedictorian address.

It’s Peter’s tightrope walk between his life as a young man with a family and friends that he cares deeply about and his life as a super-powered masked crusader that makes him such a compelling character. Whereas Batman, say, no longer has a “real life,” and only uses his persona as Bruce Wayne to further his crime-fighting career, Spider-Man actively lives his “normal life,” which is why his stakes seem a lot higher.

This was brought beautifully to the foreground in the first film in this series, and it’s continued here in The Amazing Spider-Man 2. A lot of time is allocated to building the relationships between Parker and the people in his life—his Aunt May (Sally Field) who raised him, his childhood friend Harry Osborn (Dane DeHaan), his dead father Richard Parker (Campbell Scott) and even Max Dillon (Jamie Foxx), a man whose life Spidey saves in the pursuit of Sytsevich—but mostly his relationship with Stacy. Unfortunately, it feels as if there’s very little Spidey time with all this character building. Luckily, this is offset by Garfield and Stone’s wonderful banter and chemistry. They make a sweet, funny and perfect onscreen couple…the kind if you saw on the street, you’d secretly despise.

Dillon becomes the main villain, Electro, after an accident at Oscorp turns him into a being of pure electricity. Though the effects are good, the character design seems a bit too reminiscent of The Watchmen’s Dr. Manhattan. Still, Foxx is a fine actor and though he looks like a blue ball of lightning much of the film, he seems to take his role very seriously, portraying a man who’s been powerless for much of his life and is suddenly given the strength of a god.

The Amazing Spider-Man 2 ends on a low note, Empire Strikes Back style, and sets up perfectly for the third film in the series, due out in another couple of years, which should be much more of a balls-out bust-‘em-up. The action scenes, when there are some, are very exciting, but they seem too far between. However, this is a nice character-driven story that portrays Spidey for what he is…a hero of the people.