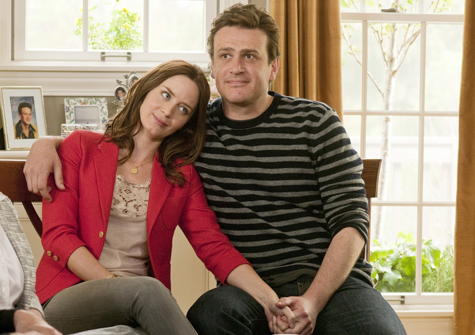 There are other movies in theaters this weekend besides The Avengers. I was just as surprised to hear this as you probably are. Opening April 27, 2012 the latest Jason Segel comedy, The Five-Year Engagement, sneaked onto the big screen before Marvel’s Mightiest Heroes battled whatever big baddy they’re pitted against. The conflict here is a young couple trying to keep it together in a crazy, mixed-up world. That’s probably not as exciting as kicking super villain ass, but it’s probably more relatable to most of us mere mortals.

The Five-Year Engagement sees Segel teaming up once again with Nick Stoller, his partner on 2011’s fantastic The Muppets, who also directs this time around. The story is an intricate dissection of the romantic relationship between Tom Solomon (Segel) and Violet Barnes (Emily Blunt), who by all appearances seem perfect for one another. The two meet at a super hero-themed New Year’s Eve party (hey, they’re in right now), and after just one year together are engaged to be married. Soon thereafter, life throws the young lovebirds a curveball when Violet gets a dream job offer in the psychology department at the University of Michigan. Tom, a sous chef on the cusp of becoming a culinary superstar, decides to pack up his life in his beloved Bay Area and head to the Midwest with his fiancÃ©e.

The culture shock, harsh winters and Tom’s own feelings of being a failure quickly mount as Violet achieves success after success at her new gig, working under the guidance of handsome Welsh professor Winton Childs (Rhys Ifans). Tom works at the best sandwich shop in town, but still feels unfulfilled in his career. So, he dabbles in hunting and experimental facial hair, and the couple’s wedding date seems perpetually “to be announced.”

Through the course of his career, Segel as a screenwriter has proven adept at staying true to clichÃ©d rom-com mode while still keeping things interesting. The Five-Year Engagement is no different in that regard. The writing is crisp–though the film, coming in at just a hair over two hours in length, perhaps a byproduct of its story spanning so much time, does seem to drag leading up to the climax. At times, it’s even poignant. As Tom and Violet’s relationship degrades, both romantic leads are shown for all their foibles. Fingers aren’t pointed, and neither character is fully demonized. Each misstep is just an example of life doing what it often does–destroying your best-laid plans and pointing you in an unexpected direction.

Even when poignancy does sneak into The Five-Year Engagement, it’s usually tongue-in-cheek. This is a rom-com that doesn’t skimp on the “com” side of things. The humor runs the gamut from lowbrow jerk-off humor as when Tom’s friend Alex (Chris Pratt) mimics masturbation during a heated kitchen scene using a carrot and cream sauce, to the awkwardly surreal, usually provided by the hilarious Brian Posehn, who stands out in a small supporting role as Tarquin, Tom’s co-worker at the sandwich shop. In one of the more memorable moments toward the end of the film, Blunt and co-star Alison Brie (Mad Men’s Trudy Campbell), who plays Victoria’s sister Suzie, have a serious heart-to-heart but do so in the voices of Cookie Monster and Elmo respectively. It’s a mixed bag of humor that’s sure to appeal to a wide range of audiences.

Like most rom-coms, The Five-Year Engagement flows from the hope all new relationships seem to bring through rocky ups and downs once the honeymoon phase has passed and sees our onscreen lovers come through the gauntlet in a happy ending, because, well, it’s a movie and that’s what’s supposed to happen. Still, it’s enough fun to make for an enjoyable date night.