Wes Anderson’s eighth film has already been likened many times to the courtesan au chocolat pastries that feature heavily in the plot: sumptuous, delicate, ornate, elaborate, confectionary. And to view The Grand Budapest Hotel as a painstaking dessert only confirms what those familiar with the director know: that it will either be irresistible or sickeningly rich, depending on who you are or what mood you’re in.

Anderson’s work is quick to make an impression this way, so my best advice at the outset is to dig in with relish, or seek refreshment elsewhere. That being said, I’d hope that some of his detractors give the filmmaker a fresh try for this one, for they might appreciate the darker, more wicked and even more dreamlike turn his style has taken. Never has it seemed less out of place than here, and much of this is owed to the film’s setting—a darker, more wicked, and more dreamlike continent—Europe.

Welcome to Zubrowka, a fictional country named for the national liquor of Poland, home to cozy pastry shops, inaccessible mountaintop monasteries, corrupt aristocrats and a rising undercurrent of militant brutality. There’s no point in looking for commentary on Nazism, Balkanization or the World Wars here, because the whole thing is plainly meant to be cooked up. This is the old-fashioned Hollywood backlot version of Europe, a glamorous transatlantic perspective that sees both the allure and the ugliness of the old world, and also the element of farce in its convoluted history.

The most convoluted element of the plot itself is its temporal arrangement: A present-day Zubrowkian girl sits down to read a novel titled The Grand Budapest Hotel, written by an author (Tom Wilkinson, in 1985), recalling a time in his youth (1968, when he is played by Jude Law) in which he meets a sad, wealthy man named Zero Moustafa (F. Murray Abraham) at said hotel. The two men meet in the sparse dining room of the complex, now renovated in mid-century Soviet style, and Zero recounts to the young writer his adventures as lobby boy for the hotel during the ‘30s, when the Grand Budapest was the picture of continental opulence. While I found these roundabout sequences amusing enough, they exacted a certain drain on the central plot, which unfolds on its own quite nicely as a self-contained, Depression-era screwball comedy.

In 1932, Zero (here played by Tony Revolori) is eager to make an impression as the newest employee of the Grand Budapest. His model for excellence is M. Gustave (Ralph Fiennes), a “liberally perfumed” concierge who has a habit of “going to bed with all his friends,” most of whom are wealthy, elderly blondes. One such escapade (with Tilda Swinton, aged beyond recognition) leaves Gustave as the inheritor for a priceless painting, Boy with Apple, infuriating the madame’s son, Dmitri (Adrien Brody), who sets out to destroy Gustave and anyone who gets in his way. Dmitri is aided by his corpselike right-hand man, Jopling (Willem Dafoe, in a mostly non-speaking role) who always pops up in the right place to kill an important ally or witness. 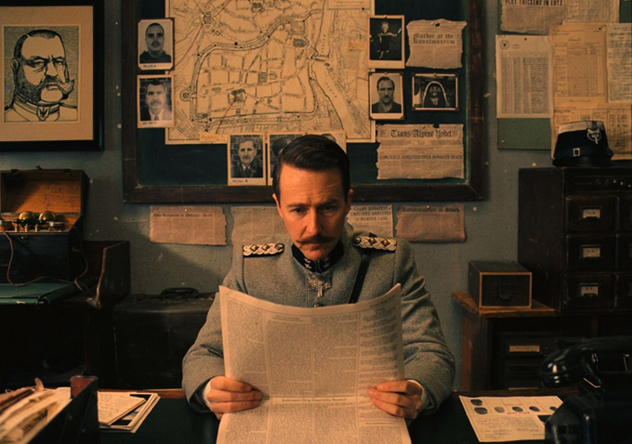 Zero follows his hero Gustave into many tight spots, including a prison break, an escape by rail, a downhill sled chase and finally a shootout in the atrium of the Grand Hotel. Each set piece is executed with the elaborate, to-scale model whimsy we’ve come to expect of Anderson, but they are by no means less exciting because of it.

A crowd of minor characters and delightful cameos enhance the star-studded, studio-era quality of the picture: there’s Saoirse Ronan’s resourceful pastry chef Agatha, Jeff Goldblum’s terse lawyer Kovacs, Harvey Keitel’s tattooed convict Ludwig and Anderson regular Bill Murray as a fellow member of a secret society of hotel concierges. The list goes on, and there is a general feeling that the filmmaker has outdone himself and let his cast have freedom to explore their roles in the playground-like sets. One bit of evidence that points to this is every actor speaking in their native accent, in spite of the supposed variety of nationalities they’re portraying.

Ultimately, and for all of it’s recognizable traits as part of the Anderson canon, The Grand Budapest Hotel speaks for an older, more classic style of movie making. It echoes a time when life was hard, and the movies allowed an escape into wild (and sometimes irreverent) whimsy. I recommend heavily for viewers to hunt down some of the movies that inspired this one, such as To Be or Not to Be (1942) or The Good Fairy (1935). In light of this tradition, it doesn’t make sense for critics to decry the “lack of raw emotion” or the “detached bemusement” of the characters. This is a dream land, a story-book world. If you want reality, go find a gritty, handheld-camera docu-drama. But some of us still want to break free from overly political, overly earnest, overly real situations from time to time, and indulge in confection. It doesn’t hurt that this one is well-written, great looking and filled with imagination.