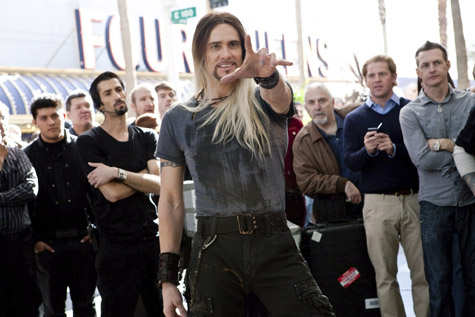 As far as entertainers go, magicians are simultaneously the most schmaltzy and awe-inspiring. In Las Vegas, where everything is more grandiose, the schmaltz and awe become even more magnified. This is the world of Burt Wonderstone, a mostly bare-chested purveyor of illusions. The Incredible Burt Wonderstone chronicles his rise and fall, and though there are some ho-hum moments, the film has enough bright spots that trick you into believing that what you’re watching is pretty good.

Wonderstone (Steve Carell) is a bullied child with an inattentive mother. He finds a friend in magic, Anton Marvelton (Steve Buscemi), another young boy ostracized from his peers, and the two strike up a lifelong partnership that blossoms into a lucrative career performing magic in their own theater at Bally’s in Sin City.

Burt and Anton’s “magical friendship” is having problems, though. Some 30 years after they first met, their show is beginning to unravel. Burt has become an insufferable egomaniac, overindulging in alcohol and women. These preexisting problems are exacerbated when a new breed of magician, Steve Gray (Jim Carrey), bursts onto the scene. Gray is a parody of David Blaine and Chris Angel. He’s a street magician with a bad boy image whose tricks are more self-mutilation than magic.

With Gray’s fame and momentum building, Anton devises a stunt that will update his and Burt’s image, but when that goes horribly awry, the two go their separate ways, and Burt eventually loses everything.

The Incredible Burt Wonderstone follows the typical pattern of rise, fall and redemption. It’s a story so familiar that you need only to be barely conscious to follow along. Horrible Boss’s screenwriter John Francis Daley also has his hand in this film, and while the latter was considerably more interesting, Burt Wonderstone, should strike a chord with anyone who grew up watching David Copperfield specials on television. (Copperfield even makes a cameo.)

There are some moments that plod on, such as when Burt comes to the realization that he’s been a complete tool to everyone who’s ever cared about him. It’s a slow road to recovery for the former top magician, punctuated by cheesily scored montages. Though just 100 minutes, it was enough to make The Incredible Burt Wonderstone feel much, much longer.

There are some great comedic moments along the way, though, including some hilarious sight gags. There’s also a great cast at work here, doing their best to make these utterly ridiculous characters feel like real people. Carell really douches it up for this role, and does so convincingly. He still imbues his character with enough likeability, though, that you actually hope he’s able to turn it around. Gray is the perfect role for Carrey—big, bizarre and cartoonish, which are all in the veteran comedian’s wheelhouse. Though Gray really only serves as the foil to Burt and Anton’s glitzy and glamorous brand of magic, Carrey does shine in limited screen time. Buscemi is great as the likable putz; and Olivia Wilde more than holds her own among a trio of heavy hitters, flashing a great deadpan delivery and sharp comedic timing as Burt and Anton’s assistant Jane. Alan Arkin wonderfully rounds out the main players as the old, retired magician who inspires Burt to get back on his feet.

The Incredible Burt Wonderstone doesn’t have many tricks up its sleeve. It’s not going to dazzle you with smoke and mirrors. It’ll probably just make you chuckle a bit, which might not exactly be magic, but it’s definitely not a bad thing either.