Men are dogs. Am I right, ladies? They might have it all—the perfect job, money, a beautiful wife—but they always end up begging strangers for treats, if you know what I’m saying. That familiar scenario plays itself out with ho-hum results in the new thriller, The Loft, starring Karl Urban of Star Trek reboot fame.

Urban stars as Vincent Stevens, an it-boy in the world of architecture. He’s responsible for those buildings with the awesome apartments that you wish you could afford. At the opening of his newest project, Stevens takes his four bestest bros on a tour and brings them to a lavish loft. He presents each of them with a key and tells them the loft will be their personal playground—an oasis where they can do whatever they want, with whomever they want, without having to worry about suspicious hotel charges showing up on credit card statements, basically every married douchebag’s fantasy. Stevens’ friends are a cornucopia of archetypes: the hot head (Philip, played by Matthias Schoenaerts); the loud-mouth drunk (Marty, played by Modern Family’s Eric Stonestreet); the kind of secretive mumble-y dude (Luke, played by Wentworth Miller); and the sensitive guy who’s not quite sure this is a good idea (Chris, Philip’s half-brother, played by James Marsden, aka Cyclops in the X-Men franchise). For his part, Urban is the cool, calculating Stevens, around whom this whole group of dudes.

At first, Chris is the only one to reject Vincent’s loft key, saying it’ll just blow up in everyone’s faces. But then he meets Anne Morris (played by the unnervingly gorgeous Rachael Taylor) at Philip’s wedding, and all that “But I’m a loyal husband to my unloving wife” bullshit dissipates real quick. Things are great for our guys, until the day when Luke enters the loft, finds a woman handcuffed to a bed, face down in a pool of blood, apparently murdered in some Fifty Shades-style night of debauchery. The thing is, only five keys exist, and no one knows about the loft—or its security code—other than the guys, so one of them must be responsible. The Loft then spends the rest of its time trying to unravel the mystery of whodunit.

There’s a lot to like about The Loft when the movie gets started. First, it’s got a decent cast of actors who may not be A-listers, but are all really competent. And other than Urban, whose schmaltzy delivery of just about every word of his innuendo-laden dialog makes you want to kick him in the balls, all of them do a nice job here—especially Stonestreet, who provides some much-needed levity. Other than Taylor, who lights up the screen in a pedestrian role, there’s not much of a female presence in the film, except Rhona Mitra, who stands out as Chris’ deliciously cranky wife Allison. 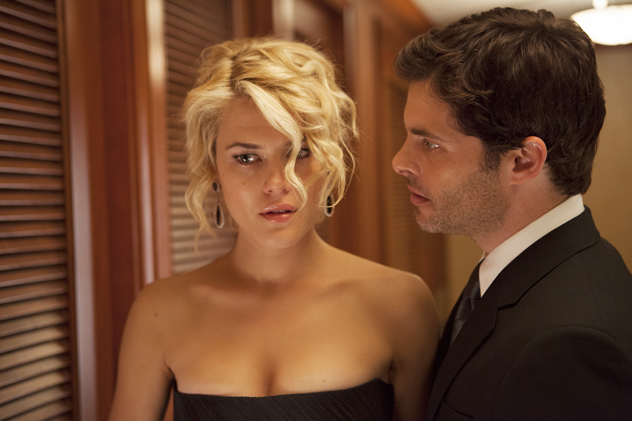 The film is also fun to look at. Erik Van Looy, who also directed the Belgian version of The Loft, gives the film a slick look and builds tension with frenetic close-ups of people’s faces, whiskey tumblers, apartment access speaker-phone speakers…just about everything. You’ll be able to count each one of Marsden’s eyelashes in a couple of scenes, which is great if that’s your thing.

Unfortunately, all the tense build-up peters out in a lackluster conclusion. While I wouldn’t call the ending predictable (though in all honesty, I’m never one to accurately predict the ending of any thriller), it just seems sudden and heavy-handed, as if the writers said, well, we have to wrap it up somehow, so…

This played out elsewhere in the script, too, in plot points that were introduced but never really fleshed out. There was Philip’s troubled youth, wherein he and Chris’ half-sister, Zoe (Dora Madison Burge from Friday Night Lights) bounced around in foster homes and were abused by their father. There was also the oft-mentioned matter of “the rules” of the loft. The guys talked about the rules a lot, like, who was abiding by them or who was breaking them, but no one really mentioned what they were. We were kind of left to piece them together: Text if you were going to use the loft? Don’t tell anyone about the loft? Remember when it’s your turn to replenish the loft’s supply of condoms? The fact that the rules were only loosely defined wouldn’t have been such a big problem for me if they didn’t bring them up so goddamn much.

The most important rule you should take from The Loft is that if your best bro offers you a key to some swinging downtown pad, don’t take it, because eventually you’ll probably have to cover up a murder or something. Stop barking up the wrong tree.