Here’s an example of a decent film that’s been thrown into the poisoned well of expectation. Critics have long been fattening it up for the kill by playing up hype concerning the director (this marks the debut for Wally Pfister, best known as lead cinematographer for most of Christopher Nolan’s work). Nearly every mention of the film during its extended ad campaign has been crowded with references to The Dark Knight, Inception and Memento, so much so that one might be forgiven for assuming Nolan directed the damn thing. If you can recall, a similar approach was tried with last years’ Man of Steel, produced by Nolan, but helmed by Zack Snyder (how did that work out, again?).

If audience speculation and critical over-evaluation hasn’t signed the premature death warrant for Transcendence, then the relentless Hollywood machine has, by requiring nearly all of its current productions to be CGI-fueled visual feasts appealing to every possible market.

And so follows the main spoiler: Transcendence is not one of those films. It is a relatively small, capable debut feature toying with big ideas, yet sold as a mind-blowing blockbuster from a genius filmmaker. That being said, it’s not nearly as disappointing an experience as the current ratings might have you believe. In another era, perhaps the ‘70s, production limitations and a pre-blockbuster era mindset might have worked in its favor, allowing it to focus on the more profound implications of its plot. Instead, the story takes some dampening from its need to wow us with digital effects and star power.

We start out in the aftermath of a worldwide incident in which nearly all electricity has been wiped out. Former artificial intelligence researcher Max Waters (Paul Bettany) wanders through the overgrown ruins of suburban Berkeley, where food is bartered for and computer equipment is used for doorstops. This glimpse into a “post-Internet society” then flashes back about half a decade to the present, where Max is following the research of his best friends Will (Johnny Depp) and Evelyn Caster (Rebecca Hall), a husband and wife team with a formidable collective IQ and high hopes to further the possibilities of A.I.

For Evelyn, this means making the world a better place; for Will, this means understanding it completely. As the old movie trope goes, high intelligence is often accompanied by a fierce streak of childish irrationality; the couple is working with a near-sentient computer called P.I.N.N., and in their blind pursuit of progress, are pushing their research irresponsibly close to the technological singularity (the point at which computers will surpass humans in intelligence). 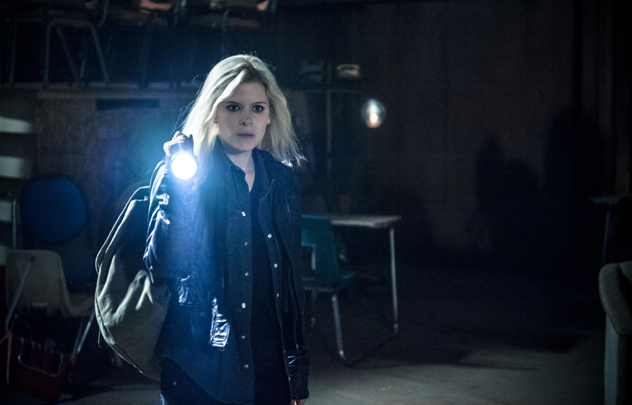 Meanwhile, a fanatical group of 21st-century Luddites (does such a thing exist?) known as R.I.F.T. (Revolutionary Independence From Technology) is targeting the Casters and other programmers associated with P.I.N.N. The group’s leader, Bree (Kate Mara, reprising her defiantly smirking persona from House of Cards) is presumably trying to prevent the singularity and protect the free will of the common man in the process. However, her methods are decidedly antisocial (firebombing computer labs, kidnapping, etc.).

The next act of the film, in which Evelyn inevitably succeeds, runs on two separate tracks: one is an intriguing sci-fi plot exploring the blurred lines between human identity and artificial intelligence, and the second is a run-of-the-mill thriller. Within minutes of coming online, the new Will/P.I.N.N. hybrid manipulates Evelyn into connecting him with the Internet, a decision which alienates Max, who isn’t convinced that the entity they’re dealing with is entirely Will. Evelyn soon isolates herself, following Will’s every direction through her smartphone and aiding him in the construction of a subterranean laboratory in an obscure corner of the Southwest. It is in the initial stages of the project, when Will’s intelligence is growing exponentially, that the film’s most rewarding moments arise.

In this intriguing section, Evelyn becomes increasingly disturbed by her husband/operating system’s ruthless efficiency and apparent coldness (imagine 2001’s HAL superimposed with Depp’s lifeless stare), and engages in an internal debate about the ethics of her project. Here the plot benefits from some of the paranoid energy that made the works of Michael Crichton (Andromeda Strain, Prey) so addictive. Will begins using the nanobots as a communicable virus that can repair organic and inorganic material, induce superhuman strength, and download itself into people’s minds.

On the other, more run-of-the-mill end of the spectrum is the story of two FBI agents (Cillian Murphy and Morgan Freeman) who mostly stand around looking confounded and helpless while trying to investigate the strange goings on at Evelyn’s desert facility.
There’s also Max, who is kidnapped by R.I.F.T. and debates whether or not he should help their cause and destroy Will altogether. These conflicts, while necessary to set up a dazzling showdown between humans and A.I., seem more obligatory than entertaining, and are less thought provoking than the scenes set in the laboratory. The most useful thing I get here is the contrast shown between the violent hysterics of R.I.F.T. and the calm benevolence of Will; it muddies the waters and makes us question whether we’d be better off guided by a computer.

With a little bit of re-structuring, I’d imagine Transcendence could be a lurid mind-trip of a movie that pursues the questions it raises to their conclusions, however bizarre. Go see it with your expectations in check, enjoy the effects and the fascinating implications, and forgive the fact that this is, after all, a thriller with certain boundaries to work within. For all of its hard science flavor, this really is a cautionary tale with realistic undertones about how far we should let any centralized power—in this case, machines—dictate our lives.