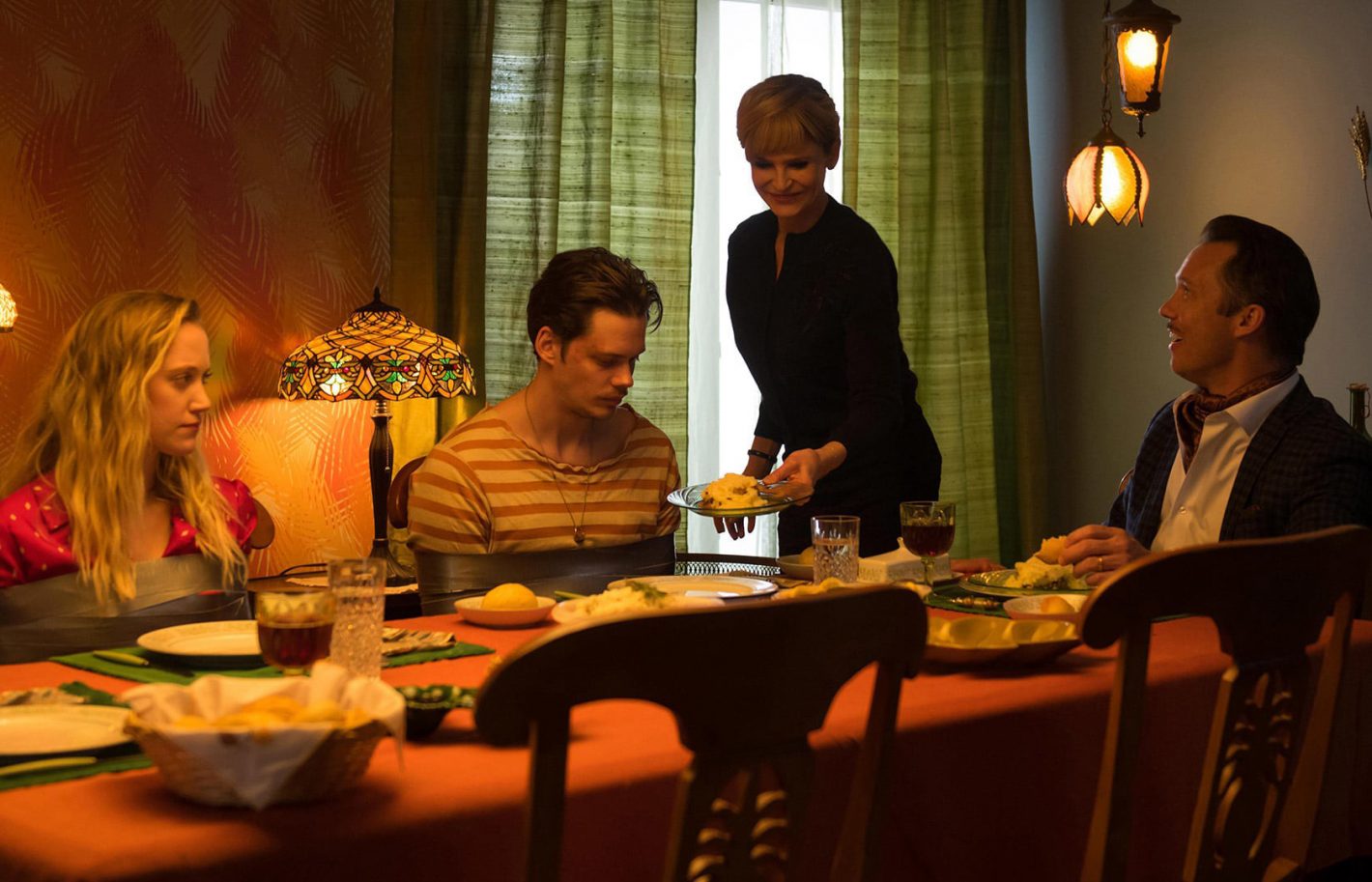 With Villains, writer/director team Dan Berk and Robert Olsen make a clean 90-minute leap from the realm of low-budget splatter to character-driven indie-comedy, nary touching the ground in the process. Having cut their teeth on a few ambitious short films and 2016’s The Stakelander, the even more obscure sequel to the 2010 cult hit Stake Land, they prove here that they can hold together a loose yet familiar premise (home invasion gone wrong) with enough thrills, laughs, quirky performances and natural pacing (minus the gore) to create something more than the sum of its parts.

Bill Skarsgård and Maika Monroe (It Follows, The Guest) ham it up as an inept outlaw couple on the run from a sloppy convenience store robbery who take shelter in an isolated country mansion after running out of gas. There, they meet their match in the occupants, George and Gloria (a delightfully demented Jeffrey Donovan and Kyra Sedgwick). Overall, the ensuing mayhem (revolving around an unfortunate basement discovery) feels more Diablo Cody than Don’t Breathe, but the film only really suffers in comparison to its spiritual precedent, 1991’s The People Under the Stairs, from which it borrows several characters and a good deal of the structure, in a way that seems fairly tame in comparison (weigh George and Gloria’s homespun-retro creepiness against the otherworldly menace of the Robeson family in the earlier film, and you’ll see what I mean). 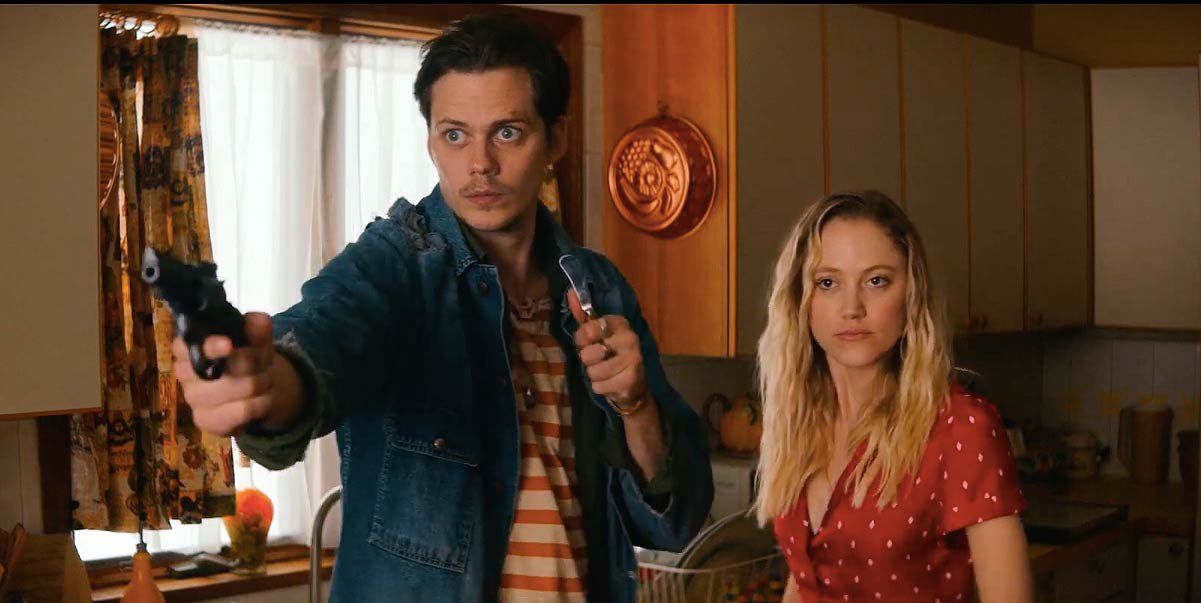 While the scares seem to be ironed out here, the film’s intent doesn’t seem to be all-stops-pulled thrill ride either. There is a curious lack of the mean-spirited exhibitionism and exploitation that characterizes most films with a similar premise. Lying within the conspicuously grindhouse structure is a pure mumblecore heart. In this sense, Villains works best as a none-too black comedy, centered on the battle of wits and wills between the younger and older couples, a quadruple showcase of over-the-top performances pulled off with obvious relish by all actors involved.

Sedgwick and Donovan manage to bring an original spark to the well-worn “homicidal homemakers” trope, creating a genteel, southern-suburbanite charm that makes their increasingly insane behavior seem more ingratiating than grotesque. Sedgwick in particular outshines the rest as the eeriest of them all in a welcomingly against-type outing, broadcasting her rage and distress behind a strained ‘50s magazine-ad smile. Donovan comes a close second, his comfy, salesman persona and dorky facial expressions working to make his lunacy seem downright reasonable. 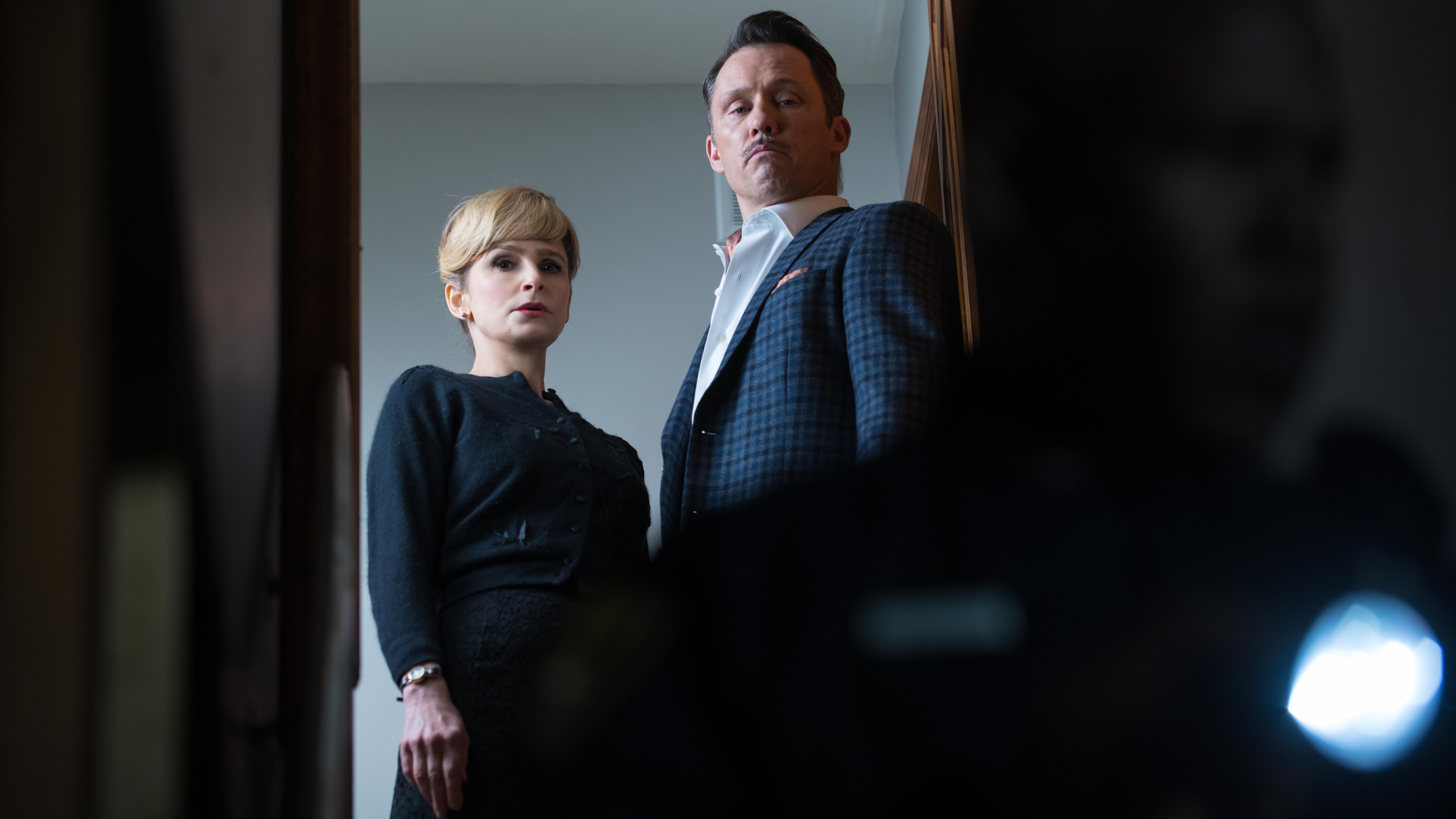 Skarsgård and Monroe nearly outdo their evil counterparts with a manic chemistry that plays off of their respective histories as monster icon and scream queen. Inhabiting their own bubble of cartoon logic and skewed morality, their characters leap confidently through the twisted cat-and-mouse scenario like the game that it is, fueled by an ample cocaine stash that keeps appearing at pivotal plot junctures. A good deal of the thrills stem from the basically deluded nature of either set of “villains” in the film. One is kept guessing from scene to scene whether either couple is more or less competent than the other, and who will eventually gain the upper hand.

Villains is a light, pre-Halloween season comedic thriller, a showcase for the talents of two up-and-coming filmmakers destined for greater work, whether inside or outside of horror. Minus one hard-wince inducing sequence (involving a metal piercing), the shock factor here is mainly kept to a minimum, but one also appreciates the fact that, unlike many recent, fully fledged horror flicks, every gimmick, twist or scare sequence has a purpose for being here and keeps things moving at a brisk pace. It might not leave the most lasting impression, especially in a sea of more tense, visceral or unhinged movies of similar type, but it’s enough to make a splash for the names Berk and Olsen, and confirms that their future projects are ones to watch out for.