When James Brown belted out the words, “This is a man’s world, but it would be nothing…without a woman or a girl,” he could have very easily been talking about the world of comedy. It’s a scene so dominated by men that just last year Adam Carolla was quoted in the New York Post as saying, “The reason why you know more funny dudes than funny chicks is that dudes are funnier than chicks.”

For about as long as people have been telling jokes, there have been detractors peddling the notion that women can’t tell them. Looking to annihilate this perception, the ensemble of all-female improvisation performers, Lady Business, takes the stage at the Sacramento Comedy Spot in Midtown one Saturday a month to lead the audience through a bawdy, and yes, funny, comic romp.

The troupe originally formed in 2010, and now improv-ers Mel Gelbart, Micaela Pettigrew, Michelle Daubner, Tiffany Hart, Mignon Foster, Jennifer Whelan (not pictured) and Christiana Dominguez constitute this uproarious and ribald troupe that celebrates a point of view that women can relate to and men can appreciate.

“If you go to any comedy show the ratio is usually 2-to-1 for guys to girls, and I remember every once in a while there’d be a show of almost half and it was exciting,” Pettigrew says. “I’d go see Christiana and Tiffany and other people that are in our group now who were just students, and at that time the only show was ACL (Anti-Cooperation League), which is our main stage show, and so we wanted to put a group together of just girls to perform together.”

The troupe’s moniker is quite the contradiction. These comediennes certainly aren’t “ladies” in the conservative, Miss Manners kind of way, and it’s this bawdy sense of community that inspired many of its members to join its raucous ranks.

“I joined the group about a year afterward, I think, and it just seemed like such a cool thing to see a whole group of female comedians being able to get together to do improv,” Foster says. “Improv is such a rare thing, but to have such a large community that we do have at the Comedy Spot to pull all female comedians together to do a show, I thought was really the point. From an audience perspective, it was really attractive because I remember going to the shows and seeing them perform and every single time it was so smart and so witty and just real supportive and it just seemed like so much fun.”

Incorporating suggestions from the audience, Sacramento’s only all-female improv troupe blend true stories from the audience and cast members to provide the vehicle for their brand of the long-form improv show with sharp-witted humor, characters that defy stereotypes and guaranteed yuks. After the cast and audience share stories centered around a monthly theme, the cast of Lady Business does a series of improvised group montages inspired by the stories.

“The thing about Lady Business is that we’ll take that word [or story], and we can make smart scenes from that. Everyone comes from different backgrounds on our team; we have two lawyers, I work in real estate, everyone has a different background and does totally different things,” Foster says. “We can all come together and share in this art form that is really unique but really big now in Sacramento at the Comedy Spot.”

While many of the Lady Business members also participate in regular ladies’ nights at the club, which feature all-female comedians and improv sketch teams, they’re quick to say that their routines are for everyone, not just those with ovaries.

“It’s not all menstruation jokes and babies,” Dominguez says. “It makes it different for us in the group because sometimes, if you’re one of two girls out of 10 people on stage, you’re going to be the girlfriend in every scene, you’re going to be the prop item in every scene and so you definitely are your gender, but in our shows we don’t have that role. It’s a lot more open than that.”

For Sacramento transplants Pettigrew and Dominguez, they’re in the right city to forge their comedic dreams. According to real estate blog Movoto.com, Sacramento is the ninth funniest city in the nation—based on a ranking of factors that included the number of comedy clubs and comedy festivals, where comedians were born or currently reside, settings of sitcoms and the number of improv groups per capita.

“I’ve been performing at the Comedy Spot since probably about 2007. I started as a student there in 2006 and I wouldn’t leave,” Dominguez says with a wry grin. “I started taking comedy classes kind of on a dare with a friend of mine. We pinky swore that we were going to do this. He went to Los Angeles and did classes with The Groundlings and now he does TV. So, when I moved to Sacramento in 2006, I literally Googled Sacramento comedy classes and came up with the Sacramento Comedy Spot.”

As the women, all veterans in improvisation and regular players at the Sacramento Comedy Spot, gear up for the second annual Sacramento Comedy Festival running Sept. 13 through 21, they’re a tight knit group of girls who say they just want to have fun on the fly.

“It’s like playtime. It’s like make-believe. Let’s go to the playground again and run from hot lava monsters,” Dominguez jokes.

“How I explain improv to people, it’s like a really fun adult camp. It’s super fun. It’s imaginative and creative in a way that you don’t have to memorize lines,” Foster adds. “I loved being in drama in high school and I love that community and I love the creativity, but man, I hated memorizing lines. I could not do it, and then I found improv and it was like funny and enjoyable and physical and all this great stuff and I just got to make it up off the top of my head. It is scary when you think about it that way, but you’re in a group with such supportive people that it’s easy, and they’re the ones that make it easy.”

The troupe will be performing on the closing night of this year’s comedy festival with the “I’m Sorry! Lady Business Apologizes to the One That Got Away,” show, which they describe as a comedic exploration of making amends with someone they want to go back and say sorry to. A catharsis of sorts, something they say fuels their creative process on stage.

“I find it oddly relaxing, the practice of [doing improv]. It is very freeing because the point is to not think and just react and it takes you back to childhood play time,” Dominguez says. “I tell people it’s relaxing and they’re like, ‘You’re weird, that sounds terrifying,’ but there is really no wrong way to do it if you’re just reacting and in the moment.” 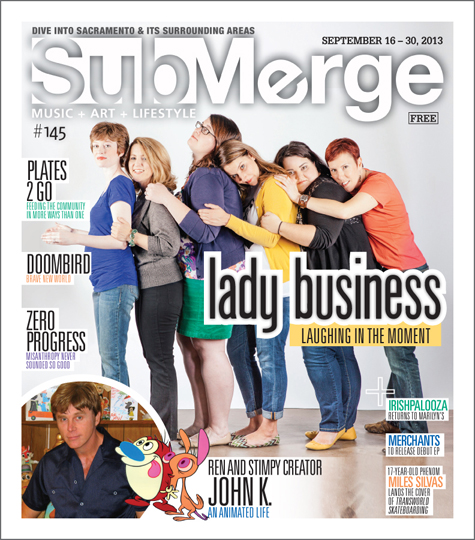