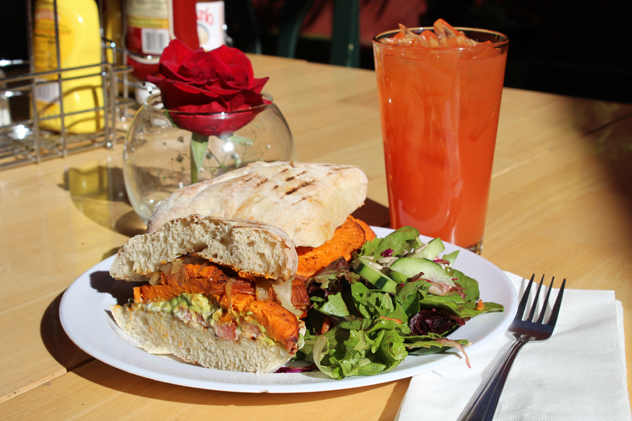 From Turkish-style kabobs and baklava, to German-imported brews and old-fashioned frankfurters, the corner of K and 23rd streets is quite the new Midtown hotspot for a quick bite to eat, or even a more relaxed and slower paced destination to seek Sunday brunch. The area recently welcomed the comforts of soul food with Sticky Gator slapping a new coat of paint on the old Rick’s Dessert Diner building, but there’s also a new color scheme on the block located across the street at Garden to Grill, a place known for its vegan and gluten-free burgers.

Once classic white in color, the structure’s new lively paint job boasts yellow and green hues, which radiate brightly amid the tall shady trees of the surrounding neighborhood. Behind the newly painted face of this familiar Midtown building is a house of history. Over its lifetime, former businesses like the True Love Coffeehouse poured an immeasurable amount of hot coffee for guests who often occupied the covered back patio for hours lost in board games and conversation. Next, the Sugar Plum Vegan Café opened its doors and offered hungry customers sweets, paninis, burgers and an all-you-can-eat Sunday brunch, but with a healthier and sometimes gluten-free stance.

This time around, the 100-year-old building continues to host vegan and gluten-free customers, now under the new ownership of Rey Ortega and his business partner Ron Russell. The two inherited Sugar Plum Vegan in May 2012 and quickly shortened the name to The Plum. Yet in order to establish their new business venture’s identity amid the crowd of restaurant choices on the grid, the two ultimately settled on Garden to Grill, inspired by Sacramento’s farm-to-fork movement. 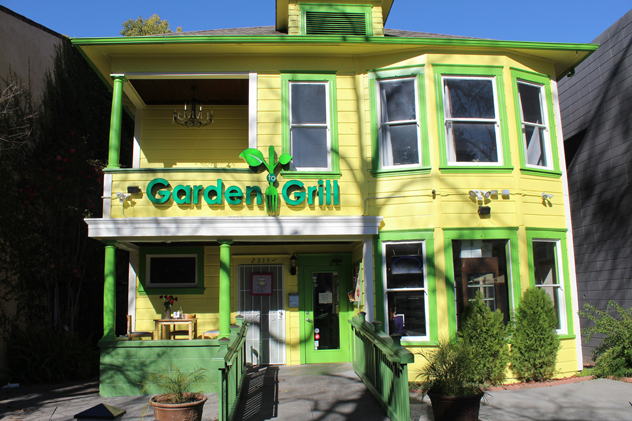 Ortega, a 21-year vegan with 22 years’ experience in the baking industry, also owns the Sun Flour Baking Company, a wholesale vegan and gluten-free bakery located on Marconi and Fulton avenues. So, it’s no coincidence that all the colorful pastries filling the glass case inside the restaurant are his gluten-free creations made with oat flour. At $3.50 a cupcake, try the chocolate cherry, a rich and dense chocolaty cake with a deep red cherry-filled center, topped with a lightly sweetened whipped cream. Dozens of other flavors that also line the pastry case include: caramel crunch, lemon coconut, birthday cake and even seasonal choices like pumpkin and caramel apple.

Garden to Grill still serves familiar items on its menu that former Sugar Plum Vegan customers will quickly recognize, like the sweet potato avocado panini or any of the risotto sunflower seed burgers. Yet, Ortega stresses that although he inherited these items, he used his “food formulating” skills to spice up each recipe after he solidified his 15-member staff.

“I’m very familiar with the food business. So, I took it upon myself after I got rid of the chef to refine everything here and make it better because it was really suffering for the longest time. It was really inconsistent and it was driving me crazy,” admits Ortega. “I’ve done it a gazillion times for a lot of people, I food formulate. I take the recipes, break them down into grams and I make adjustments.”

His new formula for the restaurant’s risotto sunflower seed patty caught the attention of Buzzfeed’s 21 Juicy Burgers that will Change Your Life list last November. Now, although this Internet media company is more known for their quizzes that match users to their celebrity doppelgangers using questionable algorithms, they’re apparently self-proclaimed foodies as well.

Nonetheless, Garden to Grill’s Veggie Burger is listed fourth sandwiched between the Hatch Burger at Umami Burger of Los Angeles and any meat patty found at Hodad’s Burgers located in San Diego.

When the ache for a fatty burger is undeniable, but undoubtedly goes against your waistline’s better judgment, the more guilt-free choice is obvious: try veggie! The California Burger at Garden to Grill is crowned with thick slices of avocado and tempeh bacon, dressed with pickles, lettuce, tomato and vegan 1000 island all housed between sesame seed buns and priced at $12.85. Or, if the more classic burger is more your style, try the Basic Burger or Gardein Vegan Burger at $10.95 with shredded lettuce, tomato and pickles. All burgers are served with garlic and herb fries.

In honor of National Sandwich Month, the sweet potato avocado panini inherited from Sugar Plum Vegan made PETA’s Top Five Vegan Sandwiches list in August 2011. The sandwich, described as a “mouthwatering” choice, is still on the menu at Garden to Grill. Thick cuts of sweet potato, avocado layered with roasted onions and tomatoes and a vegan poppy seed aioli between toasted ciabatta costs $11.25.

With a blend of fresh and familiar menu items, Garden to Grill looks forward to new changes like vegan soft serve ice cream in chocolate-vanilla swirl, and a faster style of food service.

“In the next two weeks, I’m going to change it to more like a Chipotle-style service to where you can get your food immediately instead of having to wait for it,” describes Ortega. “That’s what we’re heading toward right now, like literally. So, when you come in you order it right as you’re standing there and then you can go. We’re trying to cut out about 30 to 45 minutes of your time with the new, faster service.”

Despite the more efficient changes in the works, Garden to Grill is still open to customers every day of the week with its burgers, soups and salads, or even the more sweet treats topped with the new vegan soft serve ice cream because Ortega says you can’t have savory without something sweet. 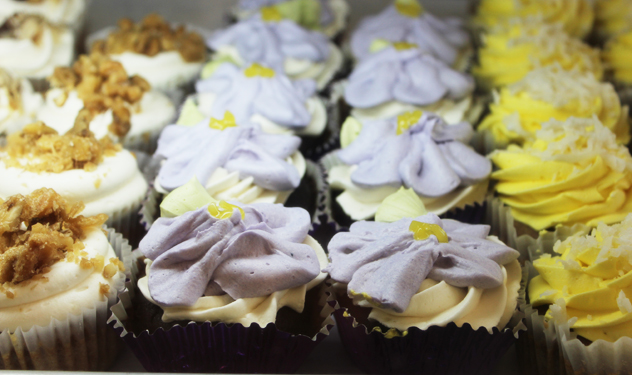