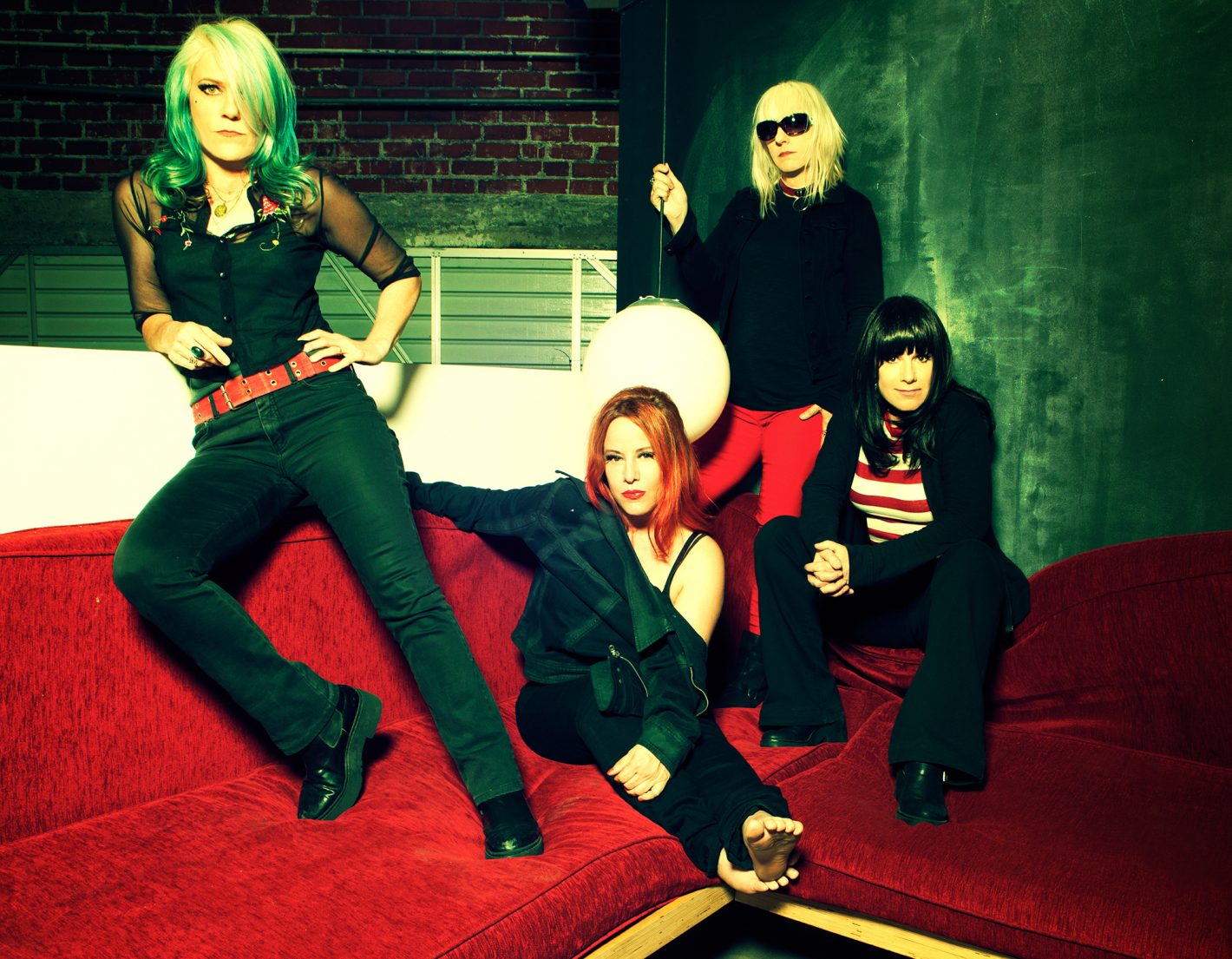 It’s been 20 years since L7 released their would-be last album, Slap Happy, but they are back. Having recently released a new record—Scatter the Rats, on Joan Jett’s Blackheart Records—and embarking on a major U.S. tour, L7 regrouped as though they’d never missed a beat. Sure, they’re an all-girl punk/metal/pop band, but to stop there would fall short of describing their uncommonly vile, piss-and-vinegar, yet catchy as hell brand of truly great music that captured riot grrrl and mainstream hearts decades ago. Donita Sparks (guitar/vocals), Suzi Gardner (guitar/vocals), Dee Plakas (drums) and Jennifer Finch (bass/vocals) still rip like an open wound.

When the band got started, feminism was having a big moment in history with the likes of Bikini Kill, Babes in Toyland and Sleater-Kinney fiercely challenging social and music scene norms. It’s sad to see that with their reemergence, things have changed, but not that much; women still take to the streets to protest their reproductive rights and inequality, while the Me Too movement calls rightful attention to the prevalence of sexual harassment and violence. So it is with anger, frustration and unity that fans of all genders welcome L7’s return.

Submerge spoke to Sparks while she was in Austin at the beginning leg of L7’s current tour to support Scatter the Rats. Here are seven reasons why you should love L7 (and go to their show in Sacramento). 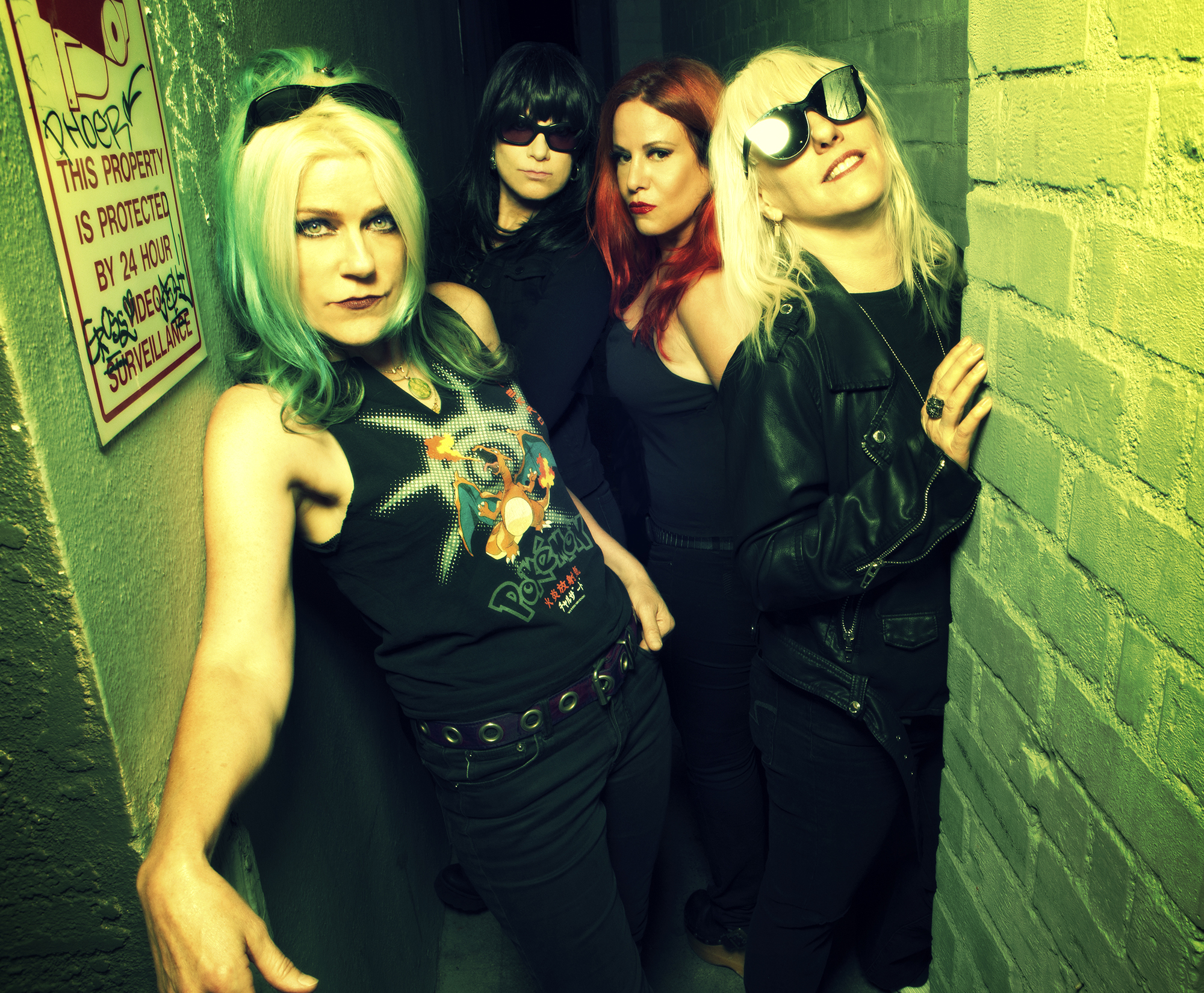 Reason #1: They’re legendary.
Wild stories of L7 circle, including the infamous time that Sparks pulled a bloody tampon out and threw it at the crowd during the Reading Festival in 1992. See them live and you might just see some crazy shit, beyond getting your eardrums blown out. But they also are legendary for their vocal activism, such as their Rock for Choice Festival in 1991 in Hollywood that advocated for abortion rights and voter registration.

Reason #2: They’re locals (kind of).
While born in Oklahoma and later relocating to Los Angeles, Gardner spent a significant portion of her childhood in Citrus Heights.

Reason #3: They listen to their fans.
Fans were begging for L7 to come back on various social media platforms, and Sparks answered by personally reaching out to her estranged bandmates to gauge interest.

“The fan interest got us back together, but our enjoyment of doing it again is what got us to make the new record and led us to the reunion tour,” says Sparks. “We wanted to keep going… Normally a manager would procure these kinds of reunions and get people talking about it again … like a, ‘She’ll do it if you do it,’ kind of thing. But there was no buffer for us. There was just a, ‘Do you want to do it or not?’ kind of thing.”

We’re glad they did.

While the band’s relevance may be part of why their comeback has been so well received, the Me Too movement had nothing to do with them getting the band back together.

“I usually detest all politicians—and certainly there are better ones than others, but the political climate had nothing to do with this,” adds Sparks. “I think for a lot of our fans, it had a lot of meaning for us to come back at this time, but it wouldn’t have mattered if Hillary, Obama or Trump was president. We decided to do this for ourselves as artists and as a victory lap for our younger selves.”

Reason #4: They believe in spiritual housekeeping.
The album name refers to scattering whatever rats may be in your life.

When I asked Sparks how she dispels negativity in her own life, she said, “I usually just write a song about it. I think of some way to twist it into lemonade. We’re eventually all on the same side of people who attempt to do good.”

Reason #5: They’re collaborative and humble.
They all contributed to songwriting while Sparks is the primary songwriter.

“We all bring stuff in individually—sometimes Suzi and I collaborate—and we just tend to collectively weed out stuff … if it sounds a little stock. We’re good editors of our material,” explains Sparks. “We’ve got our own sort of recipe, with our own sort of ingredients and if it’s lacking some of the ingredients, we usually don’t do it. We’ve got a wide range of ingredients, too. For example, “Holding Pattern’ is a pop song with some heavy lyrics to it, while “Proto Prototype” is a heavy song with some lighter lyrics to it.

“Blackheart Records has really been involved post-recording, too. We were crowd-funded by a campaign. And we got what we needed to make the record but we were stiffed by Pledge, who stiffed a lot of artists. And there’s probably going to be a class action lawsuit against them. And Blackheart came in and paid for and distributed a lot of the videos, so it’s a great collaboration with them,” Sparks says.

“I think that there’s a lot more progress, culturally,” muses Sparks. “Our lawmakers are in growing pains. The gay rights thing blows my mind. I think there has been progress on that front, and I also think the people who have been getting threatened have been getting very violent. We should all be fighting for the environment right now. People who are squabbling right now over basic human rights and are feeling threatened because they have shitty jobs think that other people are the problem instead of powers that be. Lower income folks are being suckered by the powers that be. It’s historical. It’s been going on since the United States were colonies. They’ve always tried to separate the lower classes, and that’s still going on. So there is progress amongst each other, but the powers are still trying to keep us separated.”

L7 calls attention to these themes in their songs and interviews, urging voters from all parties to work together and fight political corruption.

Reason #7: They’re back together again.
Catch them at Papa Murphy’s Park Sunday, June 16, where they’ll make history all over again, and share the stage with Suicidal Tendencies, Rancid, Pennywise and Sharp Shock!

You heard it right: Catch the legendary L7 live at Papa Murphy’s Park (1600 Exposition Blvd.) for The Bash Music and Craft Beer Festival, Sunday, June 16. There are unlimited tastings of over 100 craft beers, including some from Sacramento’s finest! Festival hours begin at noon for VIP guests, and from 1—4 p.m. for general admission for those 21 and over. After 4 p.m. it’s a full-on all-ages RAGEFEST. Check out @thebashfestival for more info on the festivities, and visit L7theband.com for more about L7!