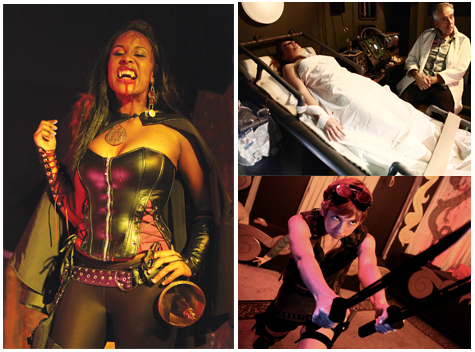 Planet of the Vampire Women

Anyone who’s stuck around through the credits of your run-of-the-mill Hollywood blockbuster knows that movies require the hard work of a lot of dedicated individuals. From actors to directors, caterers to key grips and so forth, it’s easy to see where a lot of the money from those astronomical budgets is going.

Small or even no-budget films aren’t any easier. They require just about as much work to get the job done. However, instead of relying on a vast team of trained professionals, a dedicated few are required to wear many hats. Such is the case with the Sacramento-based filmmakers behind Trash Film Orgy, headed by director/writer Darin Wood and his wife/producer/director of photography Christy Savage. The credits for TFO’s latest feature, Planet of the Vampire Women, which has just landed a U.S. DVD distribution deal through Seminal Films (international distribution is also being secured through ICAP Media), show a long list of names, but in this case don’t be surprised if you see the same name multiple times.

The result may fall short of a James Cameron opus, but what you get is something that feels handmade and personal. Most importantly, though their budgets might be small, TFO certainly does not skimp on the fun. As Savage puts it, “We’re of the mind that at this budget level, you can’t take yourself too seriously, because no one else is going to. At least if you give the people the fun and the silliness, they’re going to have a lot more fun with it than trying to do a $25,000 uber-serious movie. I mean, it worked for The Blair Witch Project, but it doesn’t work for most people.”

This ethos is readily apparent in Planet of the Vampire Women. The film originally premiered at the Crest Theatre in Sacramento on Aug. 31, 2011, but it will return to the venerable movie house on April 13, 2012 to celebrate its distribution deal and official DVD release, which is set for April 24, 2012.

The film opens at a multi-billion dollar space casino that is ransacked by a group of space pirates led by Captain Mickey “Trix” Richards (Paquita Estrada). The heist doesn’t go unnoticed, however, and the group is pursued by the ever-dutiful space marine-turned-cop Sergeant Val Falco (Jawara Duncan). The chase takes its toll as both pursuant and pursuer end up crashed on a deserted rock of a planet on the outskirts of the universe. To make matters worse, Captain Richards has become possessed; she is transformed from foxy inter-galactic plunderer into a vicious undead vixen who must feast on the blood of the living–you know, a vampire–unbeknownst to the unsuspecting crew.

Loyal crewmember Ginger Maldonado (Liesel Hanson) takes the reins, leading what’s left of the ragtag group on what turns out to be a futile expedition to find and rescue the missing Richards. As our heroes plunge forth into this extra-terrestrial heart of darkness, the plot begins to unfold, which involves a doomed race of parasitic beings fighting for survival and an effort to ensure that they don’t spread like a plague across the galaxies. Simple and effective, the story is B-movie gold, giving a wink and a nod to the great films of trash cinema past while casting itself as a new cult classic.

Planet of the Vampire Women’s most striking feature–other than the gratuitous blood and bare breasts–is its setting. Wood, Savage and co-producer Amy Slockbower have crafted an eye-catching world. From the gloriously gaudy interior of the casino to the surreal, cartoonish rock formations of the abandoned planet our protagonists have found themselves stranded upon, sets are cohesive and colorful, and the film’s plentiful CGI follows suit. While it may not look realistic per se, it meshes beautifully with the drugged-out look of the Vampire Women’s more conventional backdrops.

Computer graphics are something of a new feature in TFO’s bag of tricks. In fact, as Savage tells Submerge, Wood, putting his creative problem solving skills to the test, learned 3-D digital modeling on the job with help from students at Art Institute — Sacramento while making Planet of the Vampire Women.

“We knew it was going to be a space movie. There were spaceships and crap like that. We were going to do miniatures in the beginning,” Wood elaborates. “We were just going to buy a bunch of models and mash them all together, and make them look like something random, but I wasn’t going to get them to look the way I wanted them to look.”

Another feature that sets Vampire Women apart from TFO’s previous effort, Monster from Bikini Beach, is more coherent storytelling. Whereas the latter sometimes felt as if it was two movies in one–a story about a down-on-his-luck rogue cop entwined with local crime syndicates colliding with a Creature from the Black Lagoon-type tale–Vampire Women plows headlong into a straightforward story arc. While Bikini Beach wasn’t short on delightfully cheap thrills and snappy dialogue, TFO’s latest film feels more confident and ends up more thoroughly enjoyable. The snappy dialogue hasn’t suffered one bit, though, as evidenced in memorable lines such as “My bullshit meter is picking up huge readings of I don’t give a fuck.” Priceless!

The April 13 event at the Crest has implications beyond just a mere celebration. TFO will also unveil its Planet of the Vampire Women comic book, written by Wood and featuring the artistic talents of Paul Allen.

“[Allen] was at a screening of Planet of the Vampire Women, and he got really excited about it and went home and did some drawings over the next couple of days,” Wood says of the project’s beginnings. “It’s got this Ed Roth kind of style. He’s a really funky kind of artist. He kept saying, ‘We should do a comic book,’ but I was like, ‘We don’t really have any money. We just did the film. We don’t have the resources to do a comic book.’ I would see him at parties, and he would keep bugging me about it, but I never took him seriously.”

Eventually, Wood gave in to Allen’s tenacity to bring Vampire Women to the paneled page. Wood says the story of the book is a mix between a prequel and a sequel, following the exploits of pleasure-clone Astrid Corvain (played by Stephanie Hyden in the film).

“It was a lot of fun,” Wood enthuses. “I’ve never written a comic book before.”

Beyond that, the Vampire Women screening at the Crest will also serve as a fundraiser for TFO’s next movie. The film is untitled as of yet, but the working title is “Badass Monster Killer.”

“I’m hoping not to use that, but some days it grows on me,” Wood says of the name.

TFO has also set up a campaign on http://www.indiegogo.com/ to raise funds for their forthcoming production. A synopsis posted on the site reads as follows: “On the trashy side of Camaroville, there’s a mob turf war going down, but the new gang in town ain’t content with merely controlling the local dope and sex trade. They are also mixed up with dangerous black magic, intent on resurrecting hideous demon-gods who have waited centuries for the chance to eat all our souls and enslave mankind!”

See Planet of the Vampire Women in its newly remastered form at the Crest Theatre on Friday, April 13, 2012 at 10 p.m. Tickets are just $10 and can be purchased through http://www.tickets.com/index.html. Some official copies of the DVD will be for sale along with the Vampire Women comic book. If you’d like to donate more to the “Badass Monster Killer” fund, head to http://www.indiegogo.com/badass-monster-killer