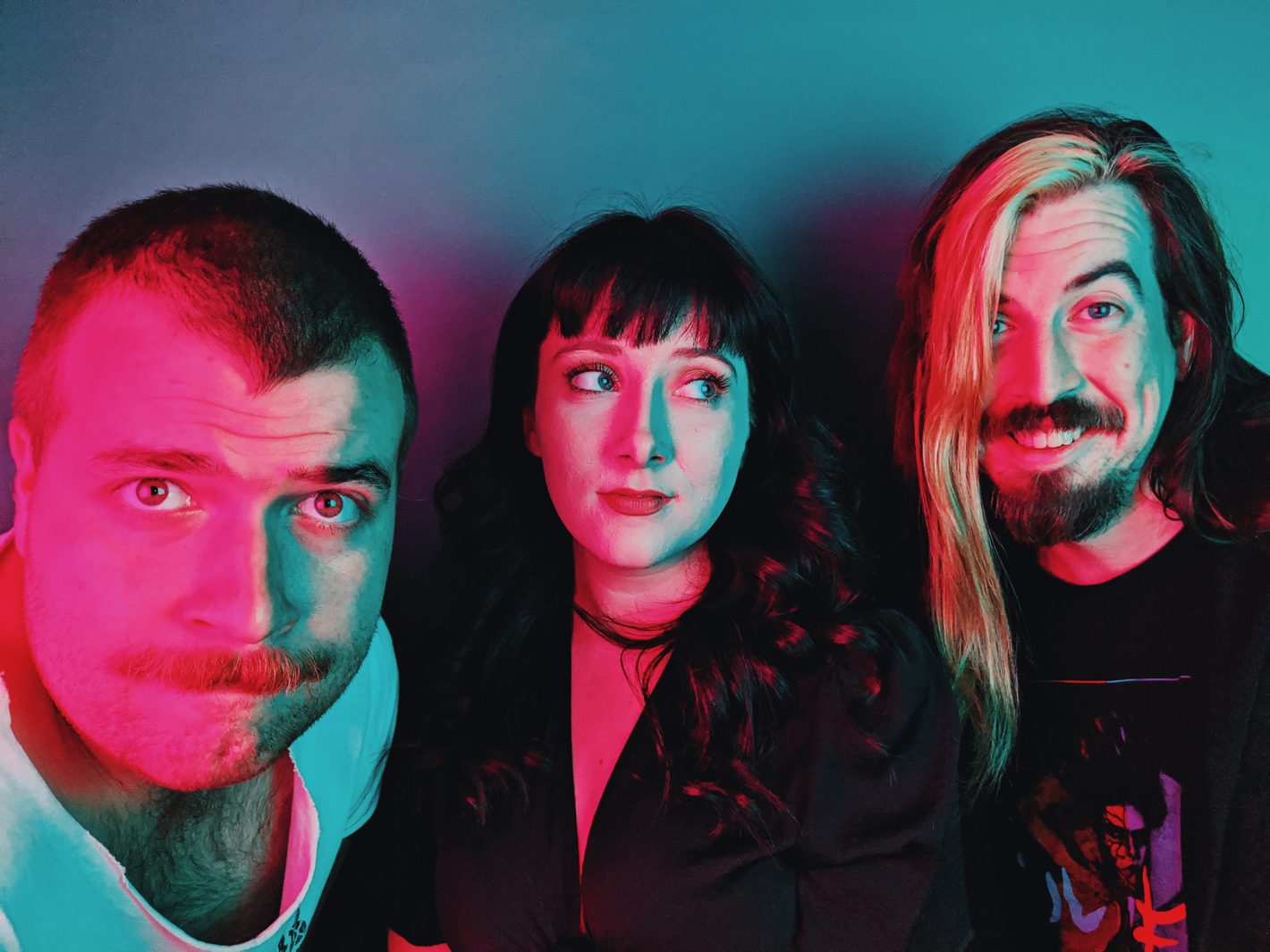 When it comes to the soundtracks of our lives, few things scream pop-punk as much as our teen years—or at least that’s how new local punk collaboration Lousy Advice sees it. Formed by Shelby Murray and Eric La Febre of Sad Girlz Club, and Jacob DeSersa of Lightweight, Lousy Advice released their self-titled debut EP last January and are already working on their second EP, to be released April 11.

Their Bandcamp bills them as “The World’s Cutest Band,” and their bite-sized four-song EP, with a pink milkshake on its cover art, comes dressed to match. Lousy Advice clocks the vibe of their music as befitting the soundtrack of a teen movie, a mood that the sound of their album definitely presents. While each song fits neatly within the wide label of pop-punk, the diminutive track list manages to cover an expansive area of influences and sounds. For instance, “CoPilot” (a personal favorite) is a sweet, up-tempo bop with a nostalgic 1990s sound. “Light,” the intro track, is a slower rock jam that leans more in the classic rock direction. For insight on their eponymous debut EP, as well as a few hints on what’s to come, we caught up with the trio in the studio. 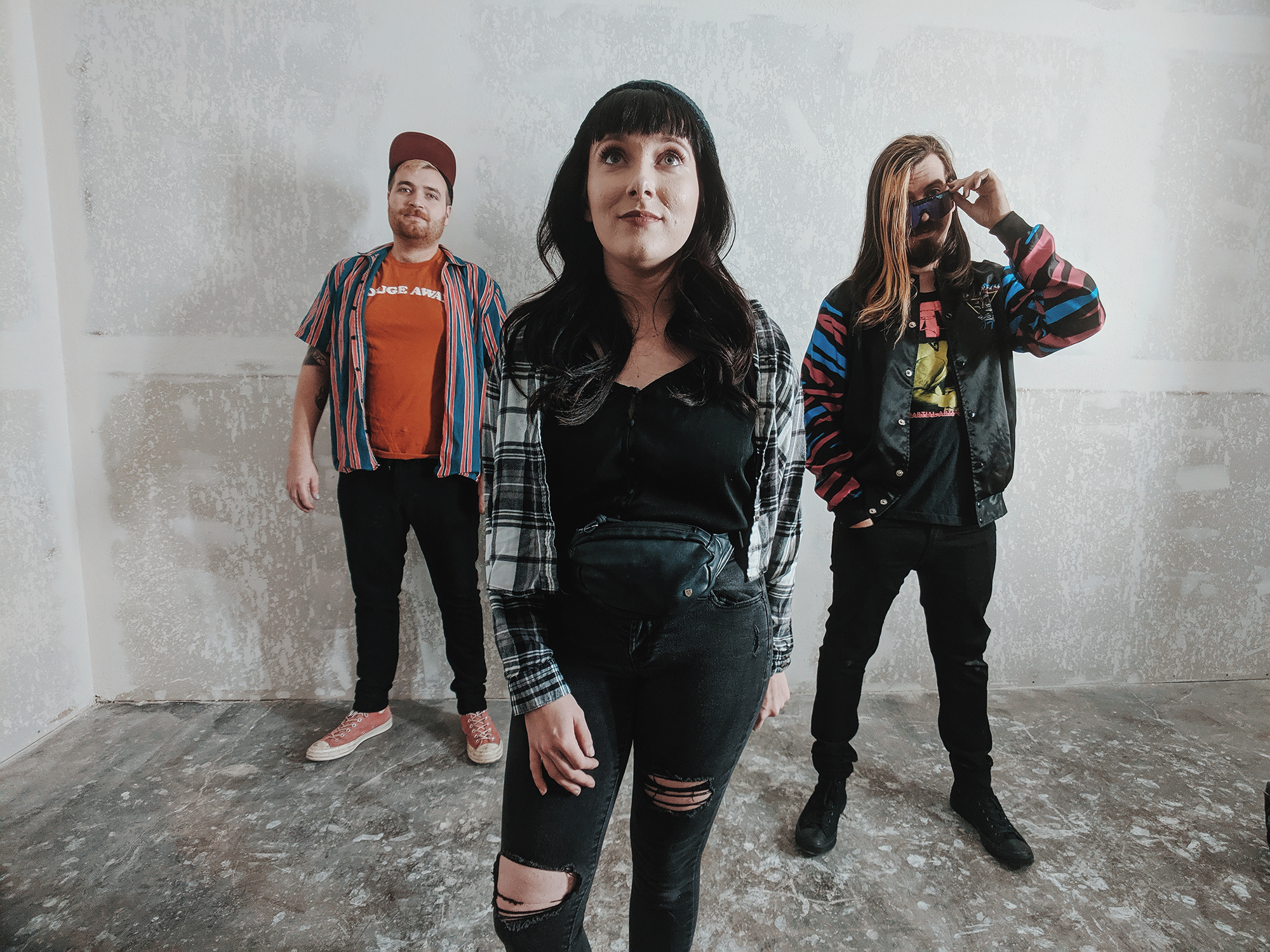 So you guys are working on a new album like, right now, correct?
Eric La Febre: Yeah, we’re in the studio right now. We’re doing another four-song EP to accompany the first one. We’re hoping to release it before we head down to La Escalera Fest, which is on April 11. It’s just going to be called More Lousy Advice.

What differentiates this new band from the other musical projects you guys are in?
Shelby Murray: I wrote the first song for Lousy Advice after talking about making the band with Jake at another La Escalera Fest, and that was “Enjoy it While You Can.” But the other three songs were stuff I had already written that didn’t quite fit Sad Girlz Club. They were more pop-y, and less on the punk side.
EL: We have a lot more room to play. If we want it to be pop-punk that’s fine, but if we like a slow rock banger … it’s like “cool, let’s play on that.”

What kind of sound were you going for on the album, since it had given a little more room to experiment?
SM: The best way I can describe it, and the way in which we talk about it all the time, is that we like music that sounds like it could be in a teen movie soundtrack.
Jacob DeSersa: I was listening to “CoPilot,” and for some reason it just popped into my head that this could totally play over Valley Girl, when Nick Cage was driving that girl into Hollywood, like on the radio. That’s the vibe.

What are your favorite teen movies?
SM: 13 Going on 30.
JD: Valley Girl was my example. I love that movie, I love Nick Cage’s hair-V that he has on his chest.
EL: I’m going to say Easy A—a more recent one, with Emma Stone—but that movie rules.

I know there are only four, but are there any songs on the record that especially speak to you?
EL: I’d say “CoPilot,” because it has that low-energy pop-punk feel with emotionally driven lyrics. I feel like it’s very nostalgic for a memory that I don’t have—kind of mysterious and kind of sad, so that’s why I like it.

Is there anything specific that fuels that nostalgia?
SM: I wrote that song 20 minutes after they had dropped me off after a tour, and after a tour you get a real depression after spending so much time in a van with all your friends. I knocked that song out in like 20 minutes. It’s just full, raw emotion, and that’s why I feel like it resonates so much with Jake and Eric.
JD: There’s this line in there about matching tattoos, so that’s really the one that gets me every time.

What were the matching tattoos of?
EL: In Montana, Lys [Mayo], the guitarist of Sad Girlz Club, really wanted to go to this trout museum and we are like, “Hell yeah! This is going to be sick,” and it ended up just like a glorified restaurant with a fish tank. There was a little emblem on the bathroom of a cowboy fish, and then a m’lady fish situation, so we all got those tattooed, with SGC [Sad Girlz Club] and LW [tour mates, Lightweight].

It seems like you guys are pretty involved in the local punk scene. What elements of that do you see influencing your music?
EL: I’m gonna say the DIY aesthetic of a lot of people here. There really wasn’t a scene like this out in the Bay, except for maybe, like, in Oakland. But moving here you see people who are just like, “I want to do this thing, I’m going to do it.” We have the resources or we can make the resources to just go for it. Wanna do a show? Someone’s got you. Wanna record? Oh, I have this friend.
SM: One-hundred percent what Eric said.

What are your guys’ favorite bands that are the most different from the music you’re creating right now?
SM: Bikini Kill.
JD: Mine’s this black metal band Leviathan, because I’m a huge black metal head but I make the poppiest music imaginable. Leviathan’s everything I want a black metal band to be.
EL: There’s a band I found out about. They’re a hardcore band called Buggin Out. They’re really good, they put out [an] … EP. They fucking rule!

If your music was a scented candle?
SM: Oh hell yeah, peach bellini, baby.
EL: I’m gonna say somewhere between oatmeal cookie and sandalwood.
JD: My mom would always buy this brownie one, and I would walk out of my room and say, “Who made brownies?” and it was just the candle. I’ll say whatever that candle was.

**UPDATE: March 16, 2020. Due to the COVID-19 pandemic we cannot promise that any of the events or shows mentioned in this article will still happen. We suggest keeping an eye on the band and venue’s social media pages to see when they re-schedule and we will try and update you here, too. Stay safe, Sacramento!**

Catch Lousy Advice Saturday, Feb. 29 at Cafe Colonial (3520 Stockton Blvd.) opening for Paper Airplanes, Danger Inc., and Church Girls. Show is at 8 p.m. You can also catch them at the Starlet Room (2708 J St.) on Thursday, April 23, with Tiny Stills and Bristol to Memory just after the release of their new EP. Tickets are $10 in advance and can be purchased through Thestarletroom.com. In the meantime, check out Lousy Advice’s Bandcamp for music and updates.