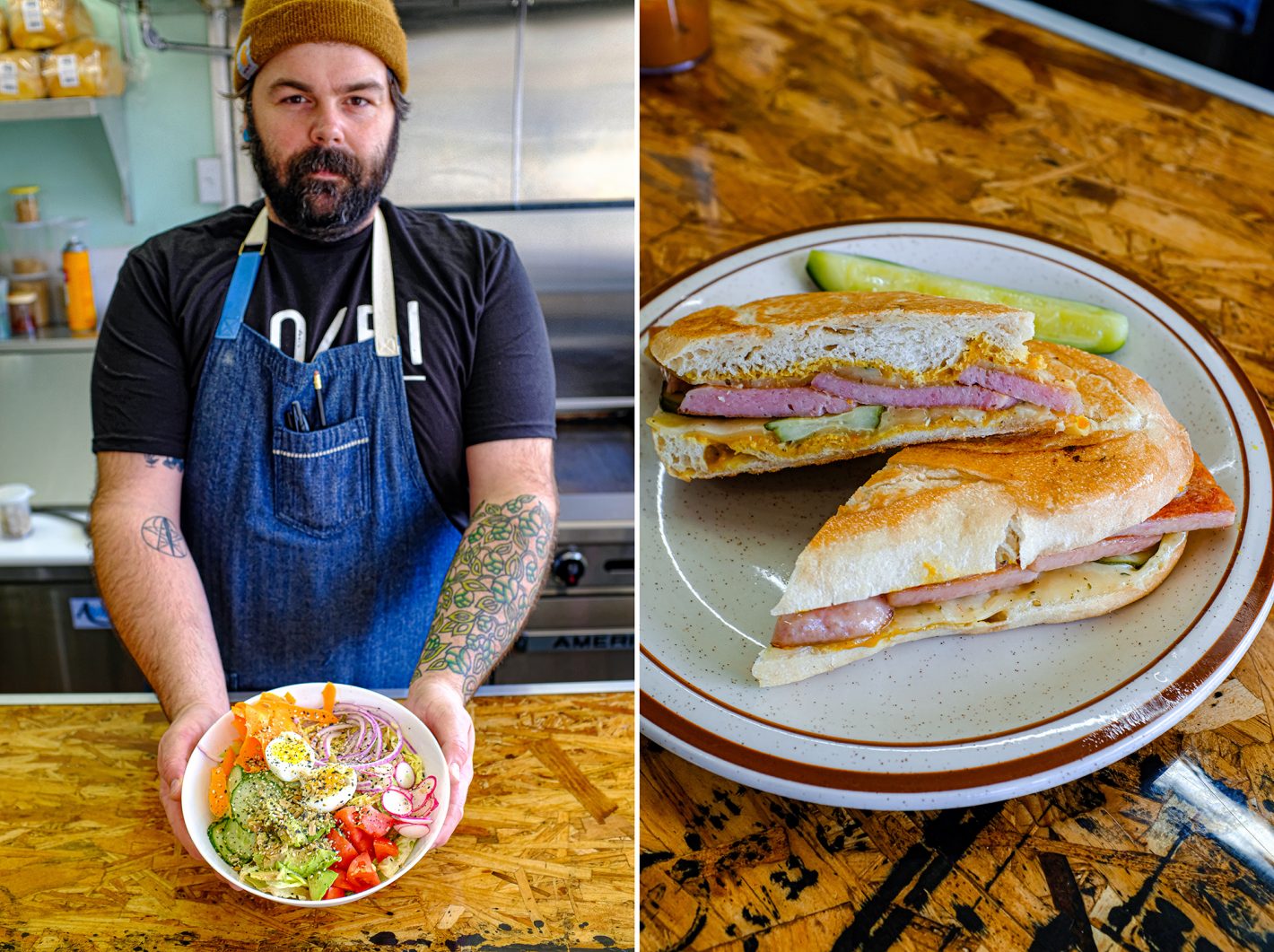 All photos by Julia E. Heath

My first introduction to Chef Bryan Widener came on a cold New Year’s Eve not even an hour into 2012. After ringing in the new year in Southside Park, word spread that Doughbot, the new doughnut shop down the street, was serving fresh doughnuts into the morning. I ran the handful of blocks to their storefront to find Widener and his wife pumping out doughnuts as fast as possible.

For the next three years, I became a regular customer of Doughbot. Saturday mornings were made for coffee and a quick stroll over to Doughbot for a S’mores or Blueberry Cornmeal doughnut. That was until the long hours of running a doughnut shop took its toll on Widener and his wife.

“We put it on the market because we were dead tired all the time,” says Widener. “So, by the end of year three, we were just ready, and I wanted to just go and work for somebody else for a while.”

After selling Doughbot, Widener wasn’t sure what he wanted to do next. During this time, his sister-in-law was looking for a roommate in Boston, so he took the opportunity to change his surroundings and grow in his profession by temporarily moving to the East Coast. After taking the first catering job he could get, Widener found his way into a tiny Italian kitchen he’d been eyeing.

“I finally ended up at a place I wanted to work at called Center Street Café,” says Widener. “It’s just this really small Italian restaurant. It was like 20, 30 seats with a real small kitchen where they made handmade pasta … the whole reason I went out there was to learn how to cook Italian food.”

After being away for six months—and learning how to make damn good cannoli—Widener returned to Sacramento.

“When I came back from Boston, I drove for Lyft and Uber for a couple months,” says Widener. “Then I started working for a coffee roaster, trying to learn how to roast coffee.”

After learning how to roast coffee, Widener worked his way around Sacramento kitchens including Skool, OneSpeed and Revolution Wines, where he was Executive Chef. Finally, he found himself at the Barn in West Sacramento. By this time, the desire to open his own restaurant started calling again. Widener even daydreamed about a specific location. It was in a building on V Street that housed June’s Café.

“I came in a lot, about once a month to get Loco Moco,” continues Widener. “When I first moved downtown, I lived down the street on 10th and T, so I’ve just always known of June’s Café. I’ve been working on a concept for this place for over three years, just hoping one day …”

Being in the Southside Park neighborhood was important to Widener when deciding on where to open his new venture, Lo/Fi. 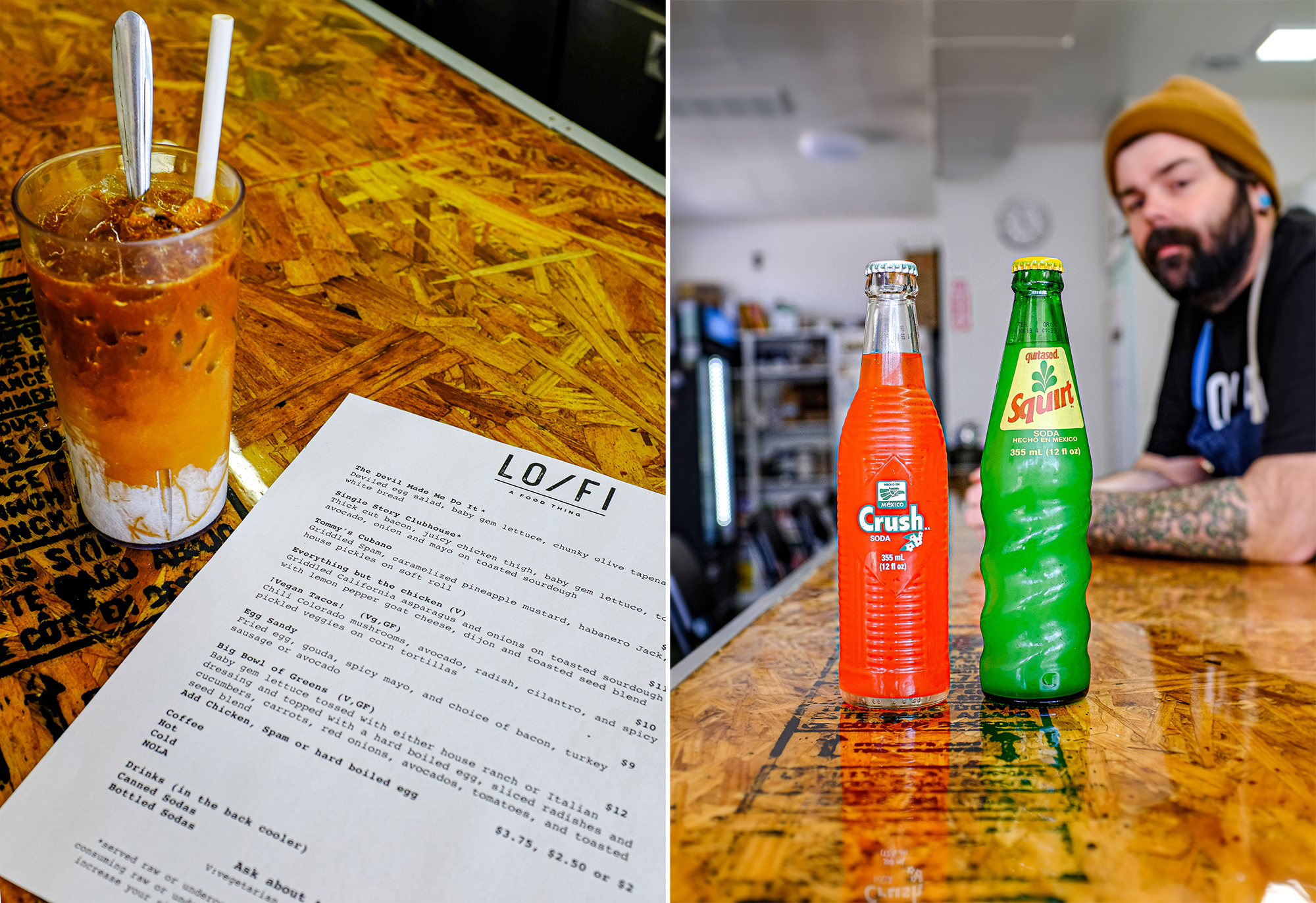 “I like this part of town,” he says. “It hasn’t been overrun with ridiculous prices for rent yet. It’s quiet, the farmer’s market is right over there, the huge park is right there, too.”

Widener knew he wanted his next restaurant to be small and casual, and was ready to take over creative control of what he cooks.

“I kind of peaked with fine dining; well, not peaked, but I’m just over it,” admits Widener. “It never really made me happy to cook that kind of food.”

With a vision and only 500 square feet to work with, Lo/Fi achieves small and casual. Like a broken-in baseball mitt, Lo/Fi’s atmosphere is comfortable and timeless with a sense of Americana. The counter is made of a sealed oriented strand board, which empty Spam cans sit upon in place of napkin holders. The counter is inviting and the building is surprisingly bright. 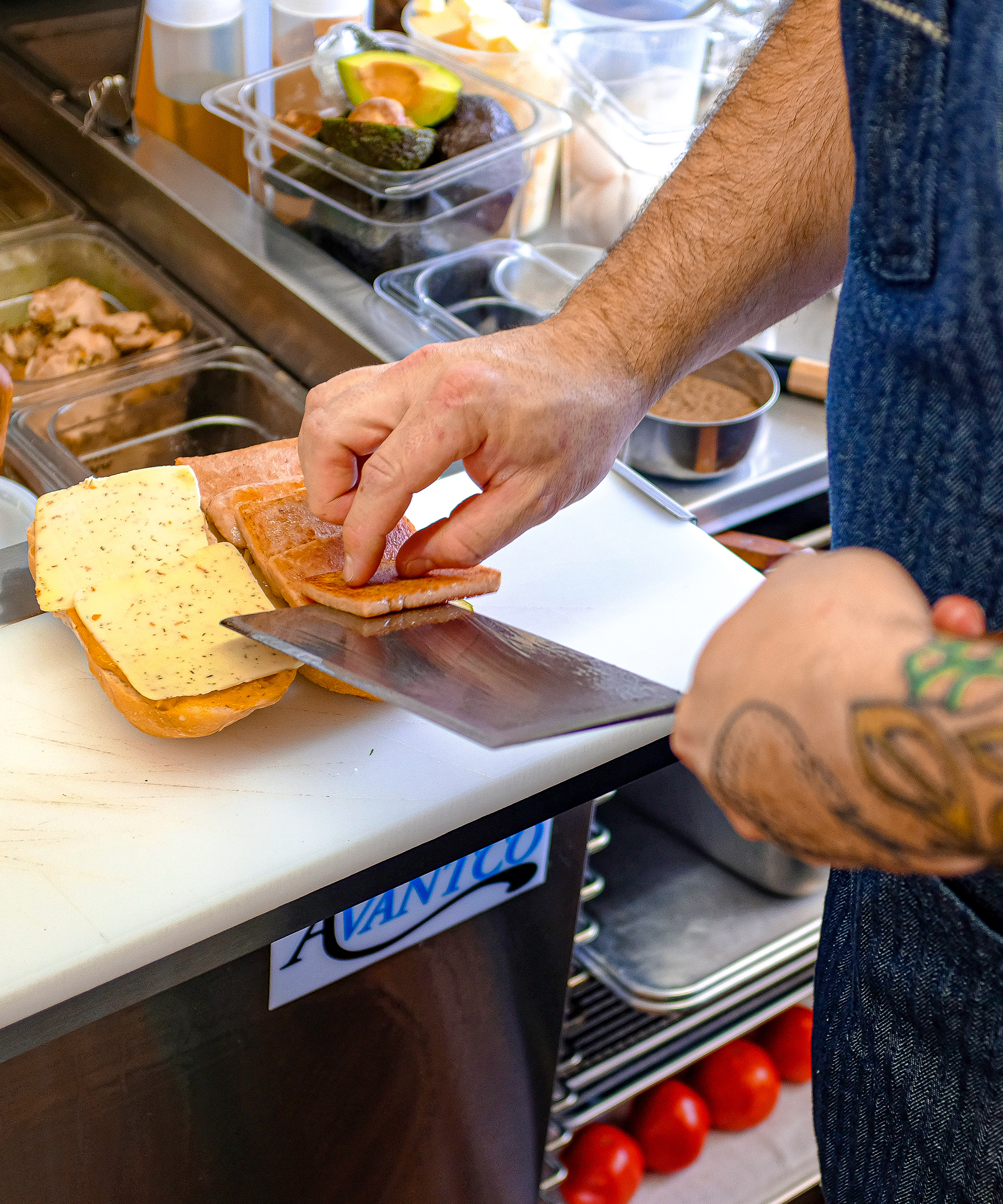 Though I have memories of eating Spam sandwiches as a kid, sadly they never came with a caramelized pineapple mustard or housemade pickles like Tommy’s Cubano. One bite of this sandwich and I quickly realized that it was a perfectly elevated version of my childhood.

“Like many in my industry I grew up kind of poor, so Spam was definitely always in the pantry,” says Widener. “But really, it’s what we busted out when we went camping. It’s shelf stable, it’s easier to transport than bacon and it’s fucking good!” 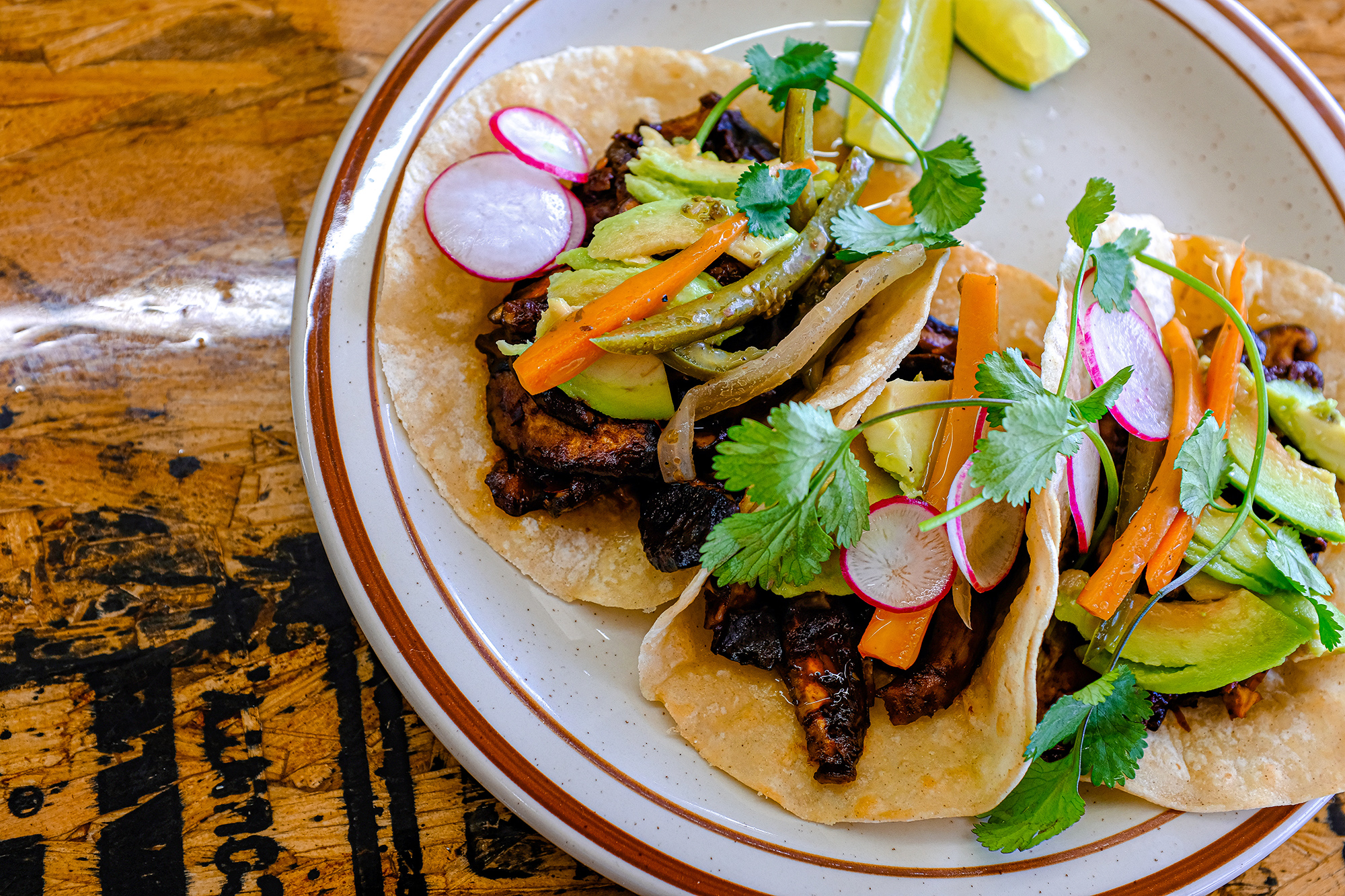 The chili Colorado mushrooms that come in Lo/Fi’s ¡Vegan Tacos! have an amazing depth of flavor that acts as a welcoming base for the brightness of pickled veggies and cilantro. This taco is not simply a vegan or gluten free option; it’s just a solid option. After having both dishes, I was split on which I liked more.

The desserts at Lo/Fi are constantly rotating and always look incredible. So far, they have offered sweet treats like cream rolls with rhubarb jam, lemon poppy seed cake with sweet ricotta, or the cannoli pie, which is crispy cannoli shells layered with sweet ricotta, chocolate chunks and orange zest.

Everything from the décor to the menu at Lo/Fi has a sense of nostalgia for the modern palate.
“I just want to cook food I want to eat,” says Widener. “The food my grandma would make for me as a kid, or the food I would order when I would go out to eat with them at greasy spoons. This food, it’s just kind of disappearing, so I think that’s probably it. Most of us [chefs] are seeing this shit go away and are missing it.”

Establishing roots in a neighborhood and getting to know his customers is important to Widener, too:

“I might be starting to tap into the East Coast, New York thing. It’s very casual, everybody’s friends. I think the next step with Lo/Fi is to try to make it more bodega-y, where someone can grab a sandwich and hang out.”

Though they have just opened their doors, Lo/Fi has already expanded their hours to include Saturdays (keep an eye out for bodega-style egg sandwiches). They will always have a few staples like Devil Made Me Do It (a deviled egg salad!) and Tommy’s Cubano, but watch for the menu to change monthly and keep on the lookout for beer and wine as well possibly coming soon.

Give your hunger a place to get real at Lo/Fi, located at 921 V St. at Southside Park. Open Tuesday-Saturday 11 a.m.–3 p.m. For more info, visit Lofilunch.com.