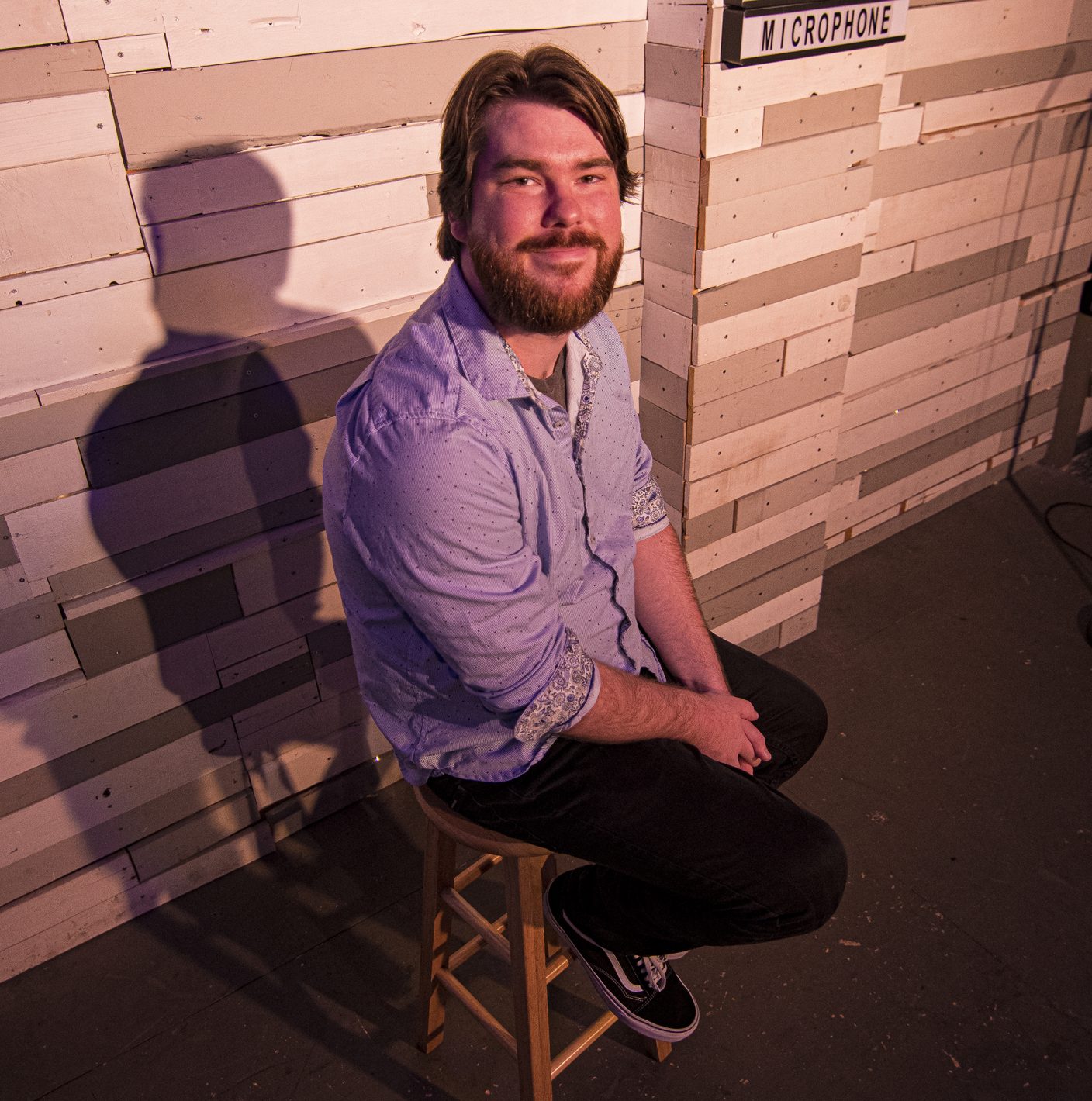 While you are busy playing on your phone, Sacramento’s own Cory Barringer finds the time to be in a band, perform stand-up comedy, produce numerous live variety shows, draw hilarious comic strips and produce perhaps the most thoughtful podcast about Digimon that has ever been created.

A man of many talents, Barringer has been a part of the city’s alternative art scene for nearly a decade, even though he barely looks a day above 25. I first met Cory about four years ago doing really weird and really funny stand-up at Sacramento Comedy Spot’s open mic. Not afraid to take chances and to be silly, his material can range from arguing with his dad about the correct way to pronounce Fanta, to a set-closing line of, “There is no God,” that ends with his mouth open and his arms outstretched, waiting for applause that only nervously arrives.

As a junior in high school, Cory Barringer struggled with the choice of being a stand-up comedian or a musician, but found that he didn’t have to sacrifice one to do the other. As a member of The Kelps since 2009 (which has been on hiatus for the last few years), Barringer and his bandmates released Head Like a Mouse (2011), Go Dutch! (2014) and For Neuroses (2015). Barringer produced the popular music and comedy talk show High Anxiety at Naked Lounge for well over a year, a talk show with his soon-to-be wife and fellow comedian Jaclyn Weiand called Third Wheels, and is currently part of the improvised stand-up comedy show Warm Takes at Stab! Comedy Theater and the live podcast show Must Love Digimon, which is also featured there monthly. Barringer recently returned to his roots by releasing a live album of his one-man music and comedy show. 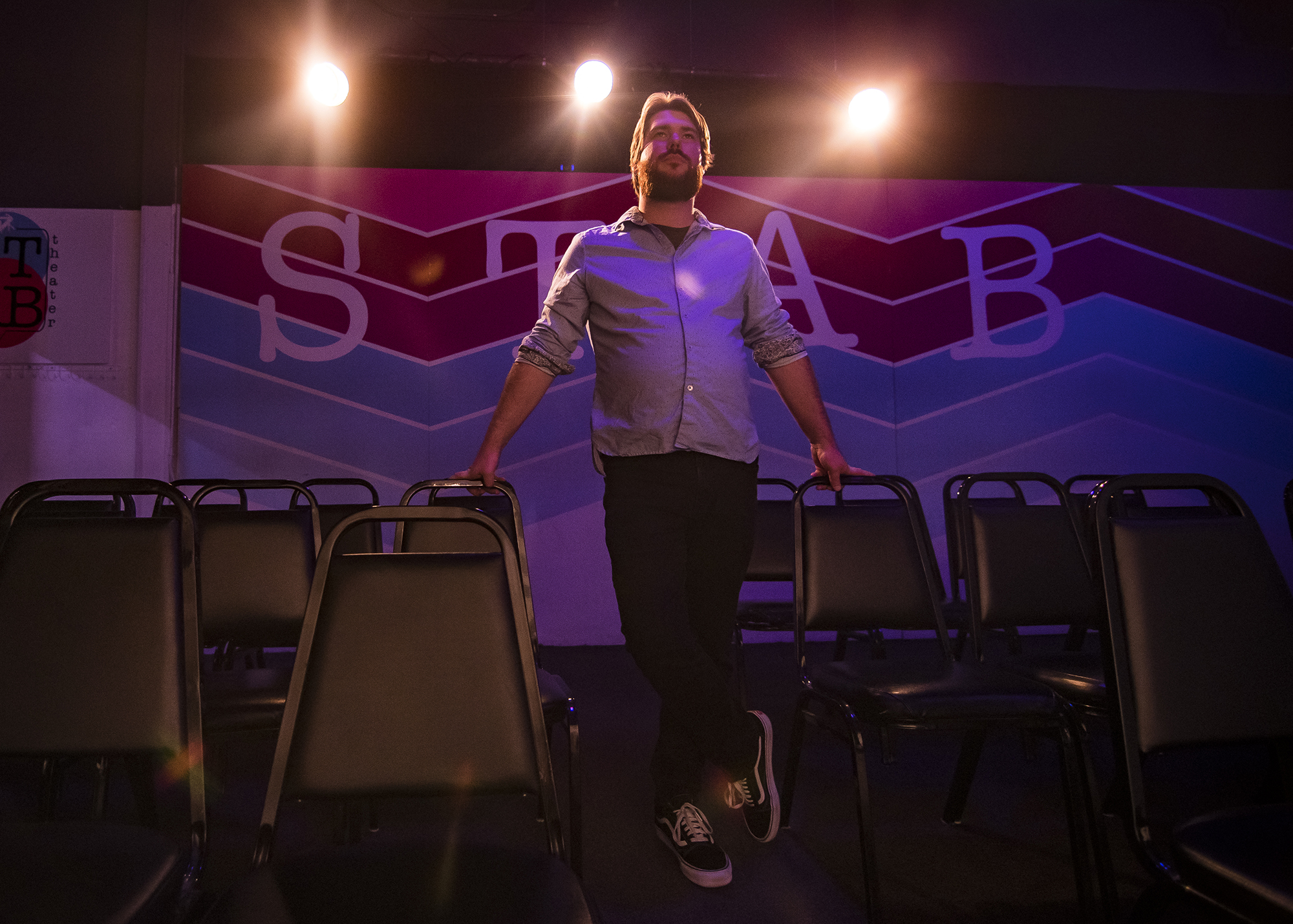 Tell me about Must Love Digimon.
It’s a labor of love. It’s an idea I had a couple of years ago. I thought that if I ever had the opportunity to do a podcast on a specific subject, it would be hyper-specific. I was thinking about something that I love but not a lot of other people love, and that was Digimon. It was a show that meant a lot to me as a kid. It’s so bizarre. I talked about it in the first episode that we did, but I didn’t realize it until I returned to it again that it was supposed to be funny. As a kid, I thought it was just a serious hard hitting drama with high stakes.

How old were you when you were watching this?
It aired in the United States in 2000, so I was about 8. But I’d say as far as my obsession with it, it went from the ages 10 to 12. I was watching the repeats and was collecting the cards. I never lost my love of Digimon. It’s still there strong. It’s a serious discussion. I’m talking about the voice casting, animation, character design and themes. We get into the deep parts of it. Because they exist.

So with comedy, art and music, you’ve been creative on multiple levels for a long time. How did The Kelps come about?
I started a band with my friends in my junior year of high school, Cameron Betts and Tony Reyes, called Captains of Spaceship Earth. This was in Lincoln, and we played a few times in Sacramento. When we graduated in the summer of 2009, we all felt really good about what we were doing musically and decided to take it as seriously as we could. We changed our name to The Kelps and went all in on that. That was everything.

But when we started the band to begin with, I was also trying to do stand-up comedy. We were in Lincoln and I didn’t have a car, so I was limited to the few coffee shop open mics that would inconsistently pop up. I loved it, and I quickly became obsessed. I look back now and shake my head at tiny baby Cory and laugh that I gave myself this rule, which was whichever one begins to get more momentum first, I’ll ditch the other and put all of my eggs into that basket. Obviously it was going to be music because I had more support behind me.

And you weren’t funny.
Obviously that was a roadblock to overcome and continue to.

What was your 16 year old stand-up like?
I did the parallel of men and women being like dogs and cats. Women are like cats because they are aloof. Men are like dogs because they love unconditionally. It was hacky stuff, and the same goes for literally anyone trying stand-up. You are emulating what you think stand-up should be.

And you didn’t have any peers in Lincoln, so it was just you trying to figure this out.
Which also means I killed, which isn’t a good thing because I was killing with bad to mediocre stuff. It gave me a confidence boost because I abandoned it, and I told myself that you can’t be both. That’s absurd. I know that now. Flashing forward, when I did come back to it in earnest about four years ago, I had this trepidation wondering, “What if the other comics know that I’m in a band?” How arrogant it was to even think they would know who The Kelps were, anyway.

Why was it a concern?
It was a concern like, “Who is this asshole? Is he slumming it?” I take comedy seriously. I know it sounds pretentious and high-falutin, but it’s like an art form. It’s a precious thing. I still don’t care for it when I see people treat it like some bucket list thing they want to knock off. I get it, and I’m way more chilled out about that now.

Yeah, there’s definitely comics that are like, “Oh comedy is so fun, and I’ve made so many new friends.” It reminds me of some retiree that just started making jewelry and is selling it at craft fairs. It keeps them busy, but Tiffany’s isn’t worried about them.
There was a time, though, when I started going to a lot of open mics and taking it seriously and would see another comic that wasn’t taking it seriously, and wasn’t even having fun. I would be frustrated that they were taking up a space. I got off work and came straight here and I care about this, and this person is just doing the same five minutes they’ve been doing all year.

Right, they just did enough work to have people to hang out with. But you can’t let it bother you.
Yeah, I’ve made the effort to become a lot less judgemental.

So are The Kelps on hiatus? Are they done?
We’ve never broken up, and we never will, but who’s to say when another show will ever happen.

So then you and Cameron start producing the High Anxiety Show at Naked Lounge, which was a music and stand-up themed talk show.
I loved that show. So far it’s the most successful thing I’ve ever done.

What was one of the most memorable things about High Anxiety?
The first thing that comes to mind is when we had Gnarboots on. Just the spectacle that they bring. It’s entertaining. Such a fun bizarre time. And it’s culty. You’re all in the cult of Gnarboots. We had some fun comics, too. My favorite part of the show was bringing comics on that I knew were fantastic and put them in front of an audience that perhaps would have never gone to a comedy show.

You also produced a series of shows called Third Wheels.
Jaclyn [Weiand] and I did that. I wanted to do a show with Jaclyn for a while. At this point, we had been going out about six months and out of the blue I told her, “You should do a show at Comedy Spot.” She suggested we could host it together. I thought it was fun when we’d be hanging outside of a show and gang up on another comic friend and make them uncomfortable with our conversations. So we thought it would be fun to let a comic do a short set, then sit them down and have a chat. We ask too many information style questions.

I remember you asked a comic if they ever ate ass.
That was a special segment on the show called, “Do You Eat Ass?”

Tell me about your recent music show.
I did a show at Stab! called Sad Songs, Etc., which was a sort of experiment. I don’t really have the sway or pull where I can do a run of shows, so when I do these little one-off shows, I can try stuff out. Which is great because I don’t know until the show is happening if it is working or not. It was a show of contrasting tones. I built a set of my saddest songs and my silliest comedy bits. So it was a song, then two minutes of comedy. It worked in some interesting ways, because right off the bat, I started with a sad song, and it got big laughs. I wasn’t expecting that. I made it clear in the beginning that I’m going to go into the corner and play sad songs, then come over here and tell some jokes. So they knew I was going to play a sad song, but they just started laughing. I don’t break. Without that first bit of context, it almost plays as this sort of strange performance art piece—this sad little boy in the corner, lamenting lost love, while an audience full of people laughs at him. The whole time I’m playing it strong, but inside, I’m like, ‘Oh, I love this.”

You can listen to Cory Barringer’s album Sad Songs, Etc. on Corybarringer.bandcamp.com. Most of The Kelps discography is on Thekelps.bandcamp.com, and you can check out his Must Love Digimon show live at Stab! (1710 Broadway, Sacramento) every third Saturday of the month, or wherever podcasts are available. For more info on the live show, go to Stabcomedytheater.com/must-love-digimon.