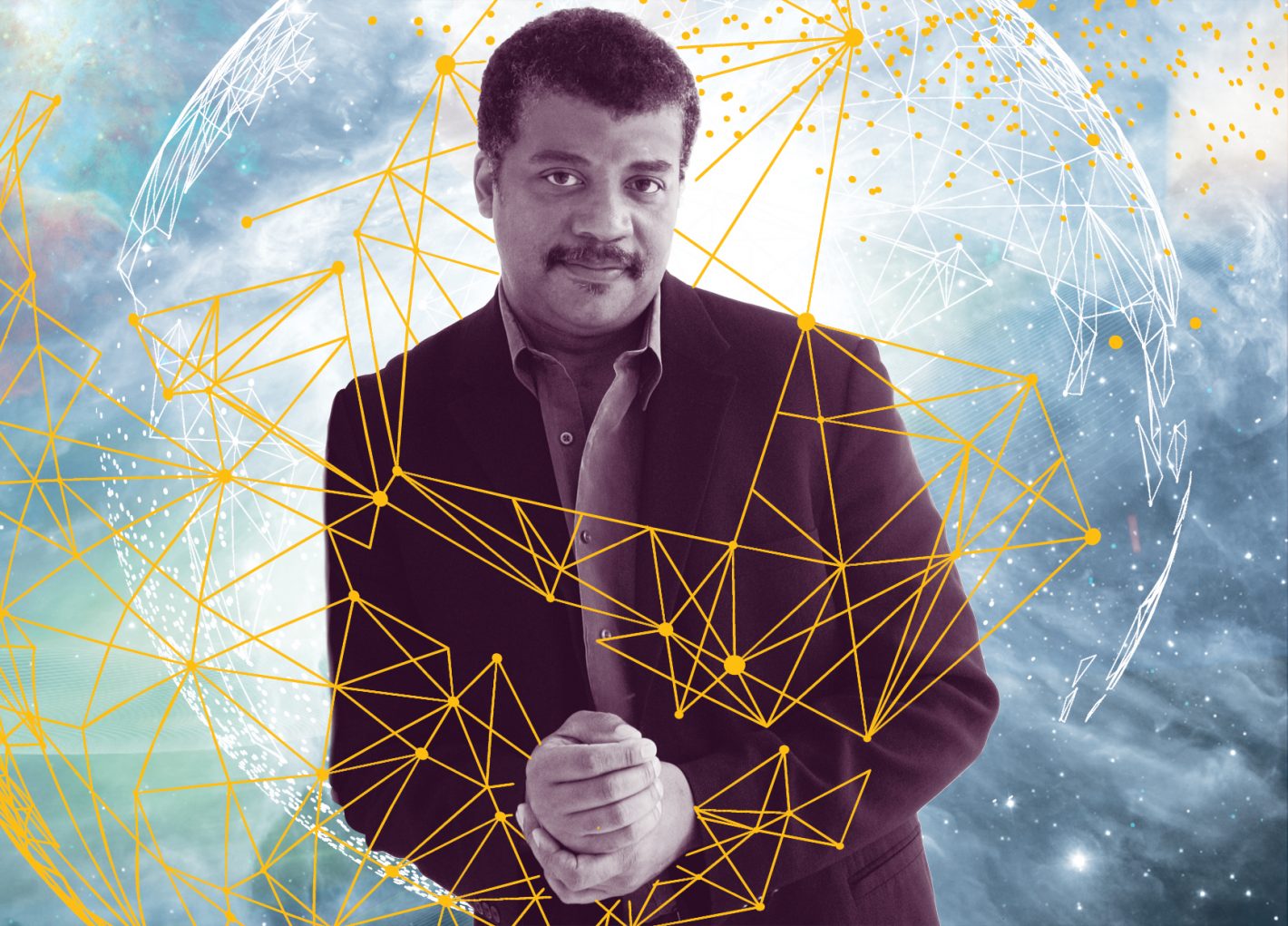 In a media landscape that’s riddled with “alternative facts” and reality stars who are famous simply because we revel in how dumb/mean/awful they can be, Neil deGrasse Tyson is a breath of fresh air.

For the past two decades, he has been the director of the Hayden Planetarium in New York, but his numerous television appearances, including guest spots on The Late Show with Stephen Colbert, The Tonight Show Starring Jimmy Fallon, The Daily Show and many others have aided the charismatic astrophysicist’s elevation to household-name status. But as you’d imagine, stardom was the furthest thing from Tyson’s mind when he entered into science.

“The fame factor, I’m still in a little bit of disbelief of it,” he says in a phone interview with Submerge from his office at the Hayden Planetarium. “I want to turn around and face people and say, ‘You realize I’m an astrophysicist. Should I remind you of this? So you can still pull out, you can unfollow, you can redirect your energies.’”

However, there are positives Tyson takes from his fame, and maybe you can, too, especially if you’re of the mind that our country has been mired in a severe brain drain in recent years.

“I think the takeaway here is there’s an underserved appetite that the public has for the universe or for learning or for science, and that’s what I’m delivering to them,” he says. “I don’t twist their arm. I’m not trying to get them to create a cult. I’m just offering knowledge, wisdom, insight into the operations of nature, and people like it. That’s very powerful information, I should think. Some networks have figured this out. CBS has the No. 1 show on television, and it’s called The Big Bang Theory. Though they may be caricatures, they are Ph.D.-educated people, and you’re eavesdropping on their social and personal lives, and who would have thought you can make money on that?”

Part of Tyson’s appeal is that he’s able to communicate his knowledge without condescending. This trait will be on display in his upcoming book, Astrophysics for People in a Hurry, which is due out in early May 2017. Notably, the title is not Astrophysics for Dummies, as he’s quick to point out, because he knows you’re smarter than that.

“I’m very proud of the book, because it took a lot of my educational insights that I’ve gleaned over my lifetime to figure out what to put in there and how to present it so I could maintain your interest, not insult your intelligence,” he says. “The first sentence is a statement of the conditions of the early universe. It’s flat-out, ‘Oh my gosh, this is otherworldly. What is this place?’ Well, it’s our universe.”

Tyson will visit Sacramento on May 9, 2017, when he’ll give a sure-to-be sold out talk at the Community Center Theater. There he’ll no-doubt blow your mind with stuff about black holes and other secrets of the cosmos. In this interview, however, we delve into deeper mysteries such as Tyson’s playlist, Stonehenge and why would anyone pre-order anything. 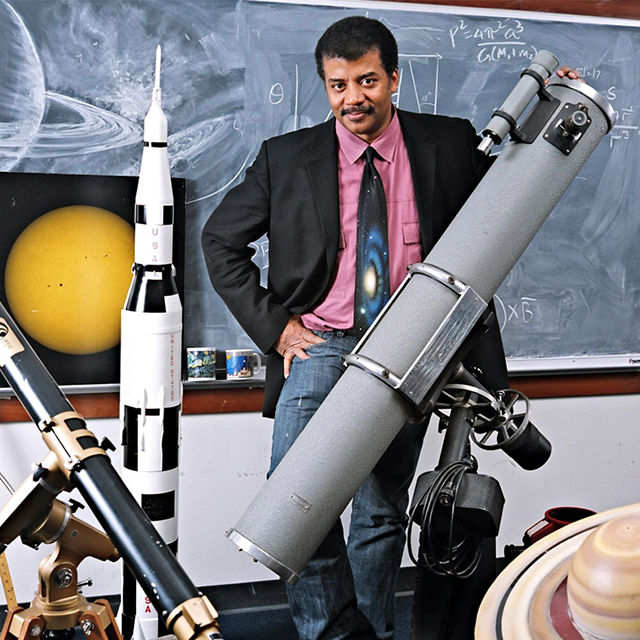 The publication I write for is primarily focused on music. Do you listen to music while you’re working in the office?
I love music, but who doesn’t, right? I have the ability to—or at least I’ve convinced myself that I have the ability—to be no less productive even in deep-focused work with music blasting behind me. Some people need silence when they focus, but I can thrive in the presence of music—particularly music that I like. Back in the disco era, because that’s how old I am, I would play disco while working on certain projects, because the incessant beat would force [laughs] … the beat would never end, right? So if I linked my own body rhythms going to the beat, it kept me going, kept me awake, kept me moving forward on intractable projects. If I were to pick a genre that I would live with above all others, it would be the blues. That’s my favorite genre. I would say that a third of what I listen to is the blues, and the other two-thirds is a mixture of everything else, from classical to pop, but time-tested pop … I’m very pop-ularist when it comes to pop music [laughs]. I like the songs that have survived scrutiny … They are the ones that the oldies station would play. You forget when you listen to an oldies station, you say, “Oh boy, we really made good music back then,” but I say, “No, they’re not playing all the crap.” They’re filtering all the good stuff from the bad stuff, and you think somehow that era had better music than later eras. It’s a common misconception that we all have when we listen to music from our time.

So unlike science, for you some of the older ideas in music are better than the new ones as far as you’re concerned?
No, what I’m saying there’s good music coming out at any given time, but I rely on the filter of time to select the best ones, and those are the ones that I listen to. And I generally agree that they’re better.

Do you have any songs or bands that are your go-to when you’re looking for something to listen to?
OK, so, amid all the hit songs that I may like, there are some groups and performers who rise up above all the rest for me in terms of how they satisfy me. One of those is Simon and Garfunkel, and another is Enya—yes, I admit that.

I guess Enya is kind of space-y …
Yeah, kind of new age, space-y. It’s celtic, of course, but it comes from another place. It comes from space! If the Celts were aliens from space, this is the music they would make [laughs]. Right? That’s what it is.

I’m probably way wrong on this, but didn’t the Celts build Stonehenge? And that was a space-thing right?
Yeah, I don’t know who precisely built Stonehenge. I thought it may have been the druids, but maybe the scholarship has been modified on that, but yeah, it is an observatory. It tracks the moon and eclipses and does a lot of really fun things scientifically.

[Editor’s note: If you’re keeping a scorecard at home, radiocarbon dating suggests evidence that Stonehenge’s construction dates back to Neolithic times and precedes the arrival of the Celts. Regardless of who built it, it’s safe to say that it’s still a pretty bad-ass monument.] 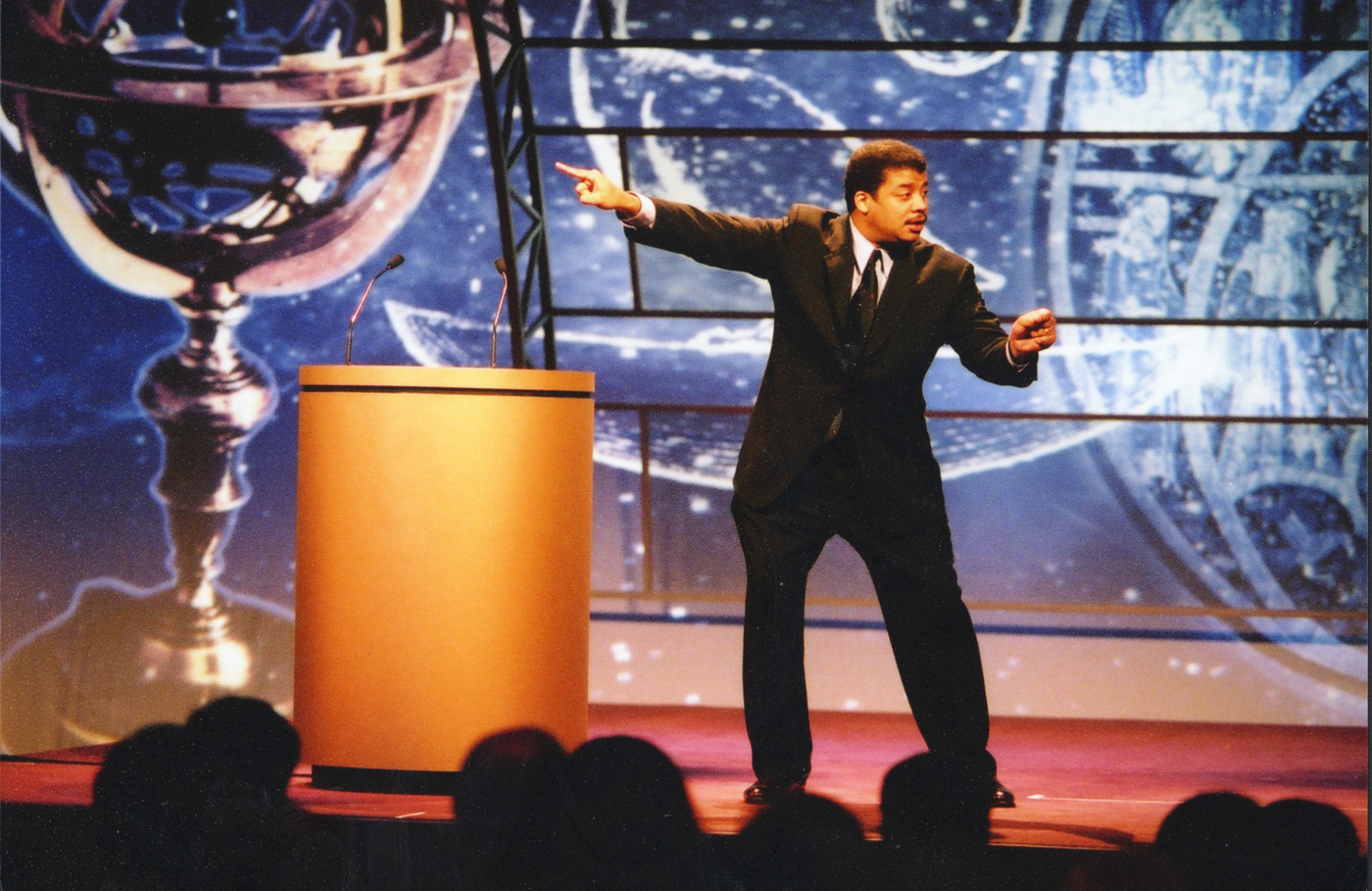 Science changes all the time. In your time at the Planetarium, how has it changed for you? Has it altered any of the assumptions you had?
No, we were smarter than that. We wouldn’t commit large exhibit money—heavy duty exhibit money—to something that could be different a few years later. So what we did was, the exhibitry was split into three varieties. One was we would cut into metal content that was of a very high shelf life. Earth goes around the sun … that’s cut into metal. The next would be transparencies that communicate information that has medium-length shelf life. And then we have another place that’s just video, where as the frontier changes, we swap in a new video relative to the old one. That way we stay current, but we anchor what we know about the universe and what’s not going to change going forward.

You have a new book on the way, Astrophysics for People in a Hurry. When does that come out?
Well it turns out, right now you can pre-order it, and I hadn’t fully appreciated why anyone would pre-order anything—but now I know. OK, you’re ready? Here’s why …

Why?
The publisher likes knowing how many books they have to print. They don’t want to print too many, and they don’t want to print too few. So if you pre-order it, that helps the publisher, but why would you want to help the publisher? Well, there’s also the fact that Amazon wants your money sooner than you want to give it to them, so if you pre-order, you order at this really low price. The book retails for $18, but they’re selling it right now for $12. Holy … How do they … What?! But that’s only in pre-order, and when the book comes out, who knows what will happen to the price? So I’m intrigued by this whole marketing dimension of what a pre-ordered book is. But it’s coming out in about six weeks … The first week of May, I think—May 2.

As a scientist, do you often find yourself breaking down things like this, like why would someone pre-order something?
Oh yeah! This is how you learn, right? You wonder why something is, and then you go investigate it, and then you learn it. If a day goes by when I don’t learn anything, that’s a wasted day.

Can you give us a preview of what the book is about?
Astrophysics for People in a Hurry … my goal for it is that all future headlines that come across from discoveries in the universe, you will be fluent in. So discoveries on exoplanets and black holes and Big Bang and the multiverse and the search for life and dark matter, dark energy, all of this is carefully curated so you get a maximum amount of information in a short amount of time, because you’re in a hurry … because that’s what the book says. You’re in a hurry. I found a way to ramp up all the really cool science so you can see it, read it, absorb it and take it with you wherever you go. I’d like to think of it as an occasion for you to consummate your relationship with the universe.

Recently NASA made headlines with the discovery of Earth-like planets in the Trappist-1 system. I heard about it from watching the press conference, but did you get a preview of that before the public did?
I used to chase the previews, but it turns out that it’s not necessary. I’ll read the press release like everyone else and then I’ll watch the press conference and then maybe I’ll get a phone call. But by the time I get a phone call, I’m already pre-briefed. I’m usually pre-briefed on these things.

When I heard about it, I was extremely excited. When you get a press release like that, are you like, “Yeah!” Is it like the Super Bowl or something like that?
Oh no, actually I lament that I’m going to get a zillion phone calls and my days no longer belong to me. I have to go into servant mode of the public’s curiosity, and I’d rather just stay home.

Join Neil deGrasse Tyson for a talk at the Community Center Theater in Sacramento (1301 L St.) on May 9 at 7:30 p.m. For tickets, go to Sacramentocommunitycentertheater.com or call the box office at (916) 808-5181. Editor’s note: This show is now sold-out!