With Midtown Cocktail Week just barely behind us, the craft cocktail resurgence seems to have hit Sacramento full-blown. The customer dialogue has changed from, “Well is fine” to “What gins do you have behind the bar?” And curiosity isn’t far behind. These more educated enjoyers of quality spirits want to know what it is, what’s in it, and where can I find it? Put down the Puckers and pick up the muddlers; freshness now reigns supreme. The usual suspects have been holding down the artform for some time; familiar names like Lounge on 20, Shady Lady and Ella come to mind. But now it’s tough to throw a rock and not hit a Collins glass with Green Chartreuse somewhere inside of it. The result is a plethora of interesting cocktails to be sampled, and everyone’s getting in on it.

Bartenders are stepping up to this challenge and becoming more educated themselves; many of them entering competitions locally and beyond to sharpen their skills and test their hands at speed or flair. Brands often endorse these competitions, encouraging bartenders to experiment with their spirits and create something interesting that may be marketable. Wowing the judges takes more than just making a tasty cocktail; technique and presentation is key and often-homemade garnishes or unique glassware help set the competition apart.

One such competition at Zocalo that happened recently challenged local bartenders to think creatively with the coffee and rum liqueur Kahlua. Chris Dooley of Ella, Travis Kavanaugh and Dominique Gonzales of Shady Lady and Amy Battaglia of The Golden Bear were among the chosen few to try out their cocktail recipes for a panel of judges. Dooley’s personality shone bright through his cocktail he named “The Veracruz,” after the Mexican state where Kahlua is produced. Made up of Kahlua, fresh espresso, bitters, Fernet Blanca, Bulleit bourbon and garnished with mint, orange, nutmeg and shaved chocolate, this stunning cocktail was a sight to behold.

“Well, Kahlua for me personally is a dessert, after-dinner cocktail. So everything in there screams ‘after dinner’; the digestif [Fernet], the espresso, the Kahlua, the chocolate,” said Dooley.

Dooley served it in a stemless martini glass that rested in another oval-shaped glass filled with frozen espresso beans to keep the drink chilled. The “Veracruz” landed Dooley in second place, but the experience of being able to toy around with Kahlua, a liqueur that bartenders rarely experiment with, was worth it. 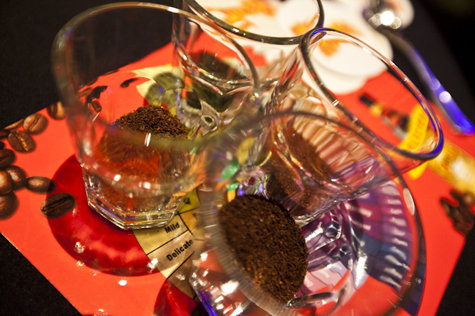 “I like to explore the diversity of it; to be able to try different applications,” Dooley expressed.

But in the end it wasn’t the Kahlua that threw Dooley for a loop.

“Anything I can add Fernet into is a challenge for me,” said Dooley.

First place was awarded to Midtown Cocktail Week’s “Rookie of the Year” Travis Kavanaugh of Shady Lady for an 11-ingredient cocktail that took 11 tries to get just right. He named it “Nuevo,” fittingly, and the judges might have scored it just that high on a scale of one to 10. Kavanaugh says that “for about a week, all I did was mess with Kahlua.” The result was a seemingly impossible blend of Kahlua, rye whiskey, Angostura bitters, orange bitters, maple syrup, Heering cherry liqueur, pineapple, egg white, nutmeg, orange zest and muddled coffee beans. Kavanaugh served his cocktail in a 5Â½ ounce coupe glass, which meant that all those ingredients had to be combined in very limited amounts to get the cocktail to fit just right. And although it took 11 tries and one week later to arrive at his final product, he enjoys the challenge of figuring out how to make it all work. 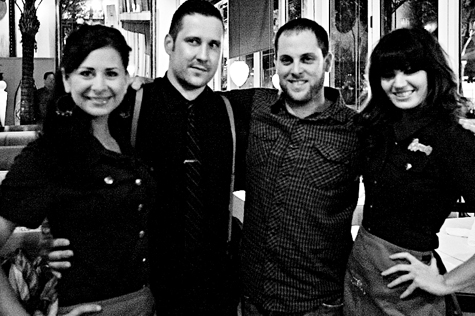 “I like competitions. Anytime I have something to mess with and break it down and just use it for a whole week, I think is really cool,” says Kavanaugh.

The time that is spent off the clock, at home or after hours, perfecting a syrup or portioning out the recipe just right, is what separates bartenders like Kavanaugh and Dooley from the rest. They aren’t alone. And bartenders who work at restaurants that may not be on the top of your craft cocktail destination list are starting to follow suit. Take, for example, Lucca bartender Chris Mansury, who is doing some very interesting things behind the bar.

Fascinating things have been done with the Bloody Mary in this town, including some amazing heirloom tomato Bloody Marys done by Chris Tucker at the now closed (sadly) L Wine Lounge. But, Mansury is taking it to a new level. His concoction is called the Hanoi Jane, which he says is a “Vietnamese-inspired version of the Bloody Mary using pho broth, Sriracha, garlic, basil and green onion.” If that isn’t enticing enough, he then salts the rim with a beef jerky salt he made and then garnishes it with basil, lime and jalapeno.

“I created it as a combination of two of my favorite hangover cures,” says Mansury.

Another interesting notable is Mansury’s Pear Basil Highball that he’s spiked with something called a shrub.

“A shrub is basically a syrup made of fruit, sugar and vinegar in equal parts,” says Mansury. “Shrubs derive from the Persian sherbert [sharbaat] which is widely regarded as the world’s original soft drink.”

Forget about pre-prohibition, Mansury is tapping into some old-school stuff here. His shrub is essentially simple syrup that’s a lot brighter with the addition of apple cider vinegar. He adds the classic combination of bourbon and ginger ale and the end product is a refreshing and balanced cocktail that screams end of summer, beginning of fall.

It goes beyond the simple “what do I have behind my bar,” and becomes a process of research and study that is fueled by passion (and maybe a few too many taste tests) where the goal is to make something handmade and unique; to discover a combination that works. The competitions are good inspiration, a way to stand out and crash course a particular spirit, but mostly it’s a love for blowing a customer’s mind when they try something they’ve never experienced before. Maybe it sounds a little geeky, but everything high-tech and cool that you own is the result of some guy or some gal sticking their nose way deep down the rabbit hole. Cocktails may not be high-tech per se, but the more out-there the ingredients and flavors get, the more challenging it becomes to make it all work together. Hence the term, “mixology.” Don’t expect to see beakers in the place of shakers, but the science of it all will be perfect for wetting that whistle.