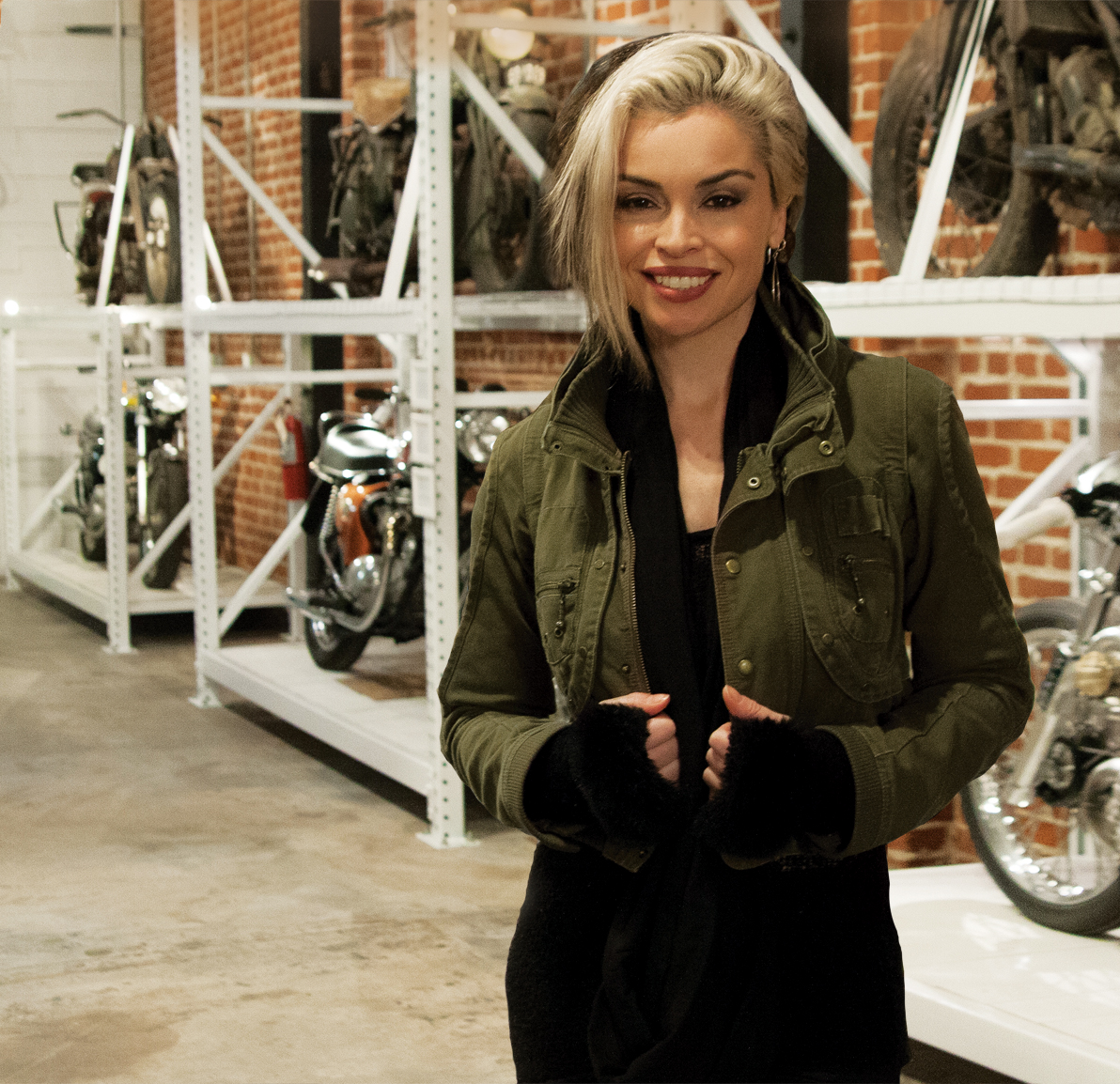 All Photos by Jon Hermison

Vintage Monkey is 6,500 square feet of fuck yeah. Fuck yeah includes a café, eclectic retail, motorcycle service/repair and a rotating museum exhibit of classic motorcycles that will leave you slack jawed. The moment you enter from seedy, industrial North 16th Street, you are transported into a state of awe where barrels full of rifle shells, larger-than-life light fixtures, a pregnant mannequin and WWII-era motorcycles on display are among the strange and beautiful eye candy that won’t stop slapping you in the face until you exit.

“If you walk in and say ‘WOW!’ then my job here is done. We have the best customers on the planet and it’s a friendly and approachable atmosphere that is full of inspiration. I love coming to work!” beams Shasta Smith, the owner of Vintage Monkey, who is as strange and beautiful as her curated surroundings.

Smith is beyond hood famous—she’s been featured on the cover of motorcycle culture magazines internationally, has had her own TV show and is kind of a big deal. So why set up shop in Sacramento? She humbly answers, “I was born in San Francisco. However, we moved to Sacramento when I was 8 years old. I’ve lived here ever since. I’m thrilled with my current location. I can say wholeheartedly that I am happy. But people outside of Sacramento probably know me better for my work than people who live in Sacramento, even though most of my work is done here. My hope is that Sacramento will fall in love with it the same way out-of-town visitors have.”

Since Smith was old enough to drive a car, she’s been riding a motorcycle. She started resto mods at the age of 30, and has now been in the business of motorcycles for the past decade. Smith, who turns 40 this year, smiles, “I’ve been a motorsport lover all my life. I own a handful of motorcycles, but I hotdog around town most often on my 1972 CB175 racer.”

As a young mother, Smith and her father witnessed a motorcycle accident, and someone died before their eyes before help could arrive. Her father asked her to stop riding, as can be understood after seeing something like that. Later, Smith had a non-motorcycle-related spinal injury that prevented her from being able to ride for a long, painful while (and still keeps her from enjoying long rides). But there was something magnetic about motorcycles that she couldn’t escape. Though she couldn’t ride, she still needed to be close to bikes and interact with them somehow. “That is when I started wrenching as mental therapy,” Smith recalls, and adds, “It is truly addicting.” 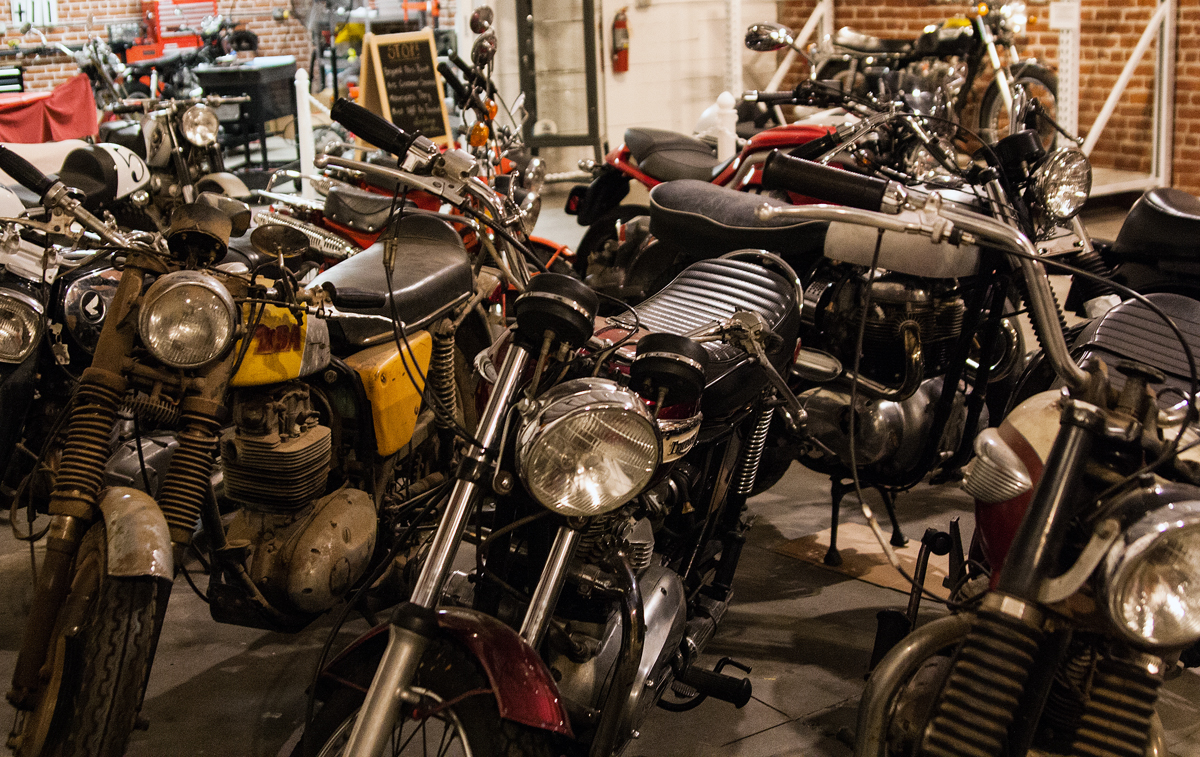 Working on bikes quickly turned into creating architectural pieces, too—sometimes from salvaged metal parts, and always with a rock ‘n’ roll edginess that fits right in with the Vintage Monkey aesthetic. Smith is a third-generation designer; it’s in her blood.

“I have a strong background in architectural design, even having taught lectures at the college level and traveled to other countries for my work,” says Smith. “I’ve always specialized in large, eccentric builds, sometimes with complex engineering. Much of my work is very hands-on. My clients’ projects are all one of a kind, and I never repeat a concept.”

Speaking of large and eccentric, Smith’s big project at the moment is a 24-foot circular bar that will host her café patrons, and hopefully beer and wine drinkers, too, pending licensure. This insanely gigantic fixture will have brass rifle shells as the counter top, filled with clear epoxy to create a flat surface. The metal plates around the bar will have the Union Jack flag painted on them. A huge chandelier, that was salvaged from Sunrise Mall, eventually came into Smith’s possession. Modified with punk rock spikes and painted white, it hangs in the center of this masterpiece, which she plans to sell eventually for around $200K to a hotel, casino or estate. In the meantime, it’ll be the centerpiece for entertaining her customers. 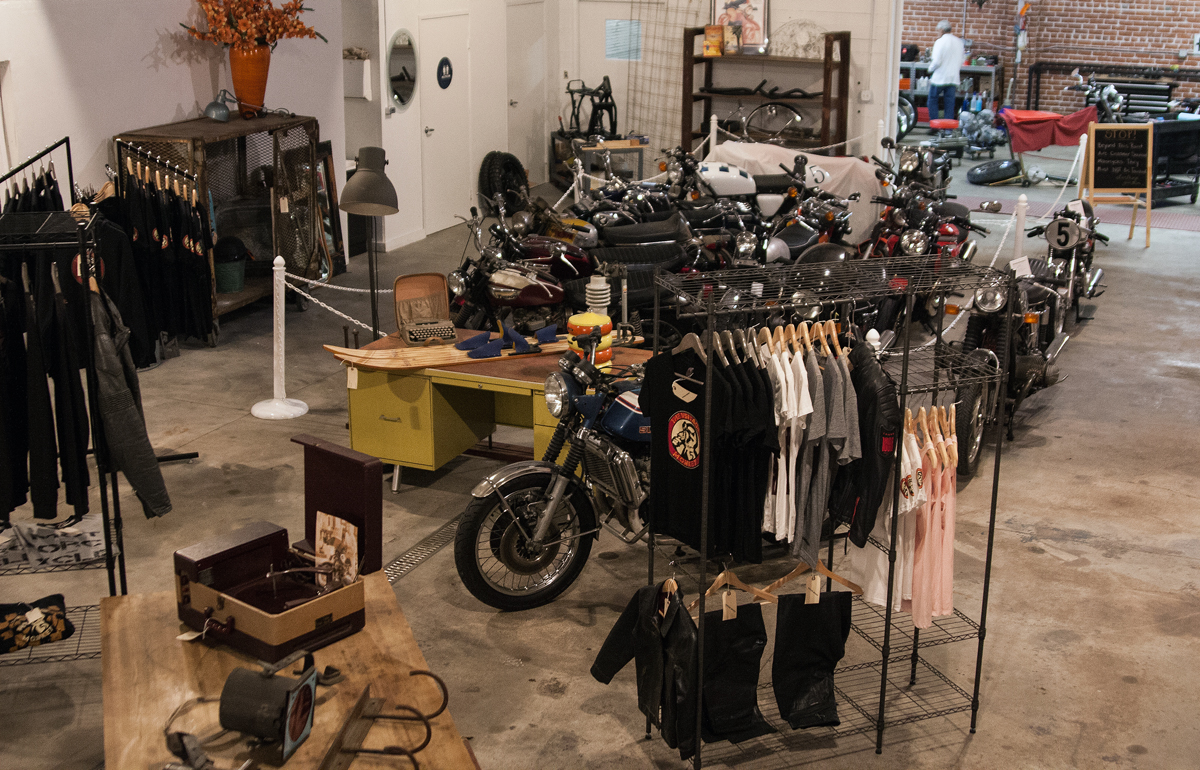 Smith was one of the original creators of Red Hot Design, which was purchased by A&E to launch their new network, FYI, a couple years ago. The show was based on her design/build work here in Sacramento and is now in international syndication. Just like her shop, Red Hot Design focused on motorcycles and architectural design, and beyond being sexy and informative, was a huge inspiration to women who watched from all corners of the country and could witness a mega babe kick ass in a male-dominated industry.

Motorcycle Monday, a popular YouTube endeavor, was created as a comedy show that follows Smith talking about motorcycle topics.

“Every episode also has a local bartender that is added to the mix,” explains Smith. “But what ended up happening is we filmed a few episodes in a day, and everyone, including myself, ended up drinking way too much. As a result, the ‘bloopers and outtakes’ were pretty fucking hilarious. People loved watching Motorcycle Monday, and future episodes may be filmed at the bar in my shop!”

Smith happily aspires to entertain, beyond the cool-yet-accessible café, and beyond TV and YouTube fame. “We will be hosting parties and social gatherings starting in the spring. The Vintage Monkey 10-year anniversary party will be the first on the list. We even rent out our location for people wanting to hold their own private events.” 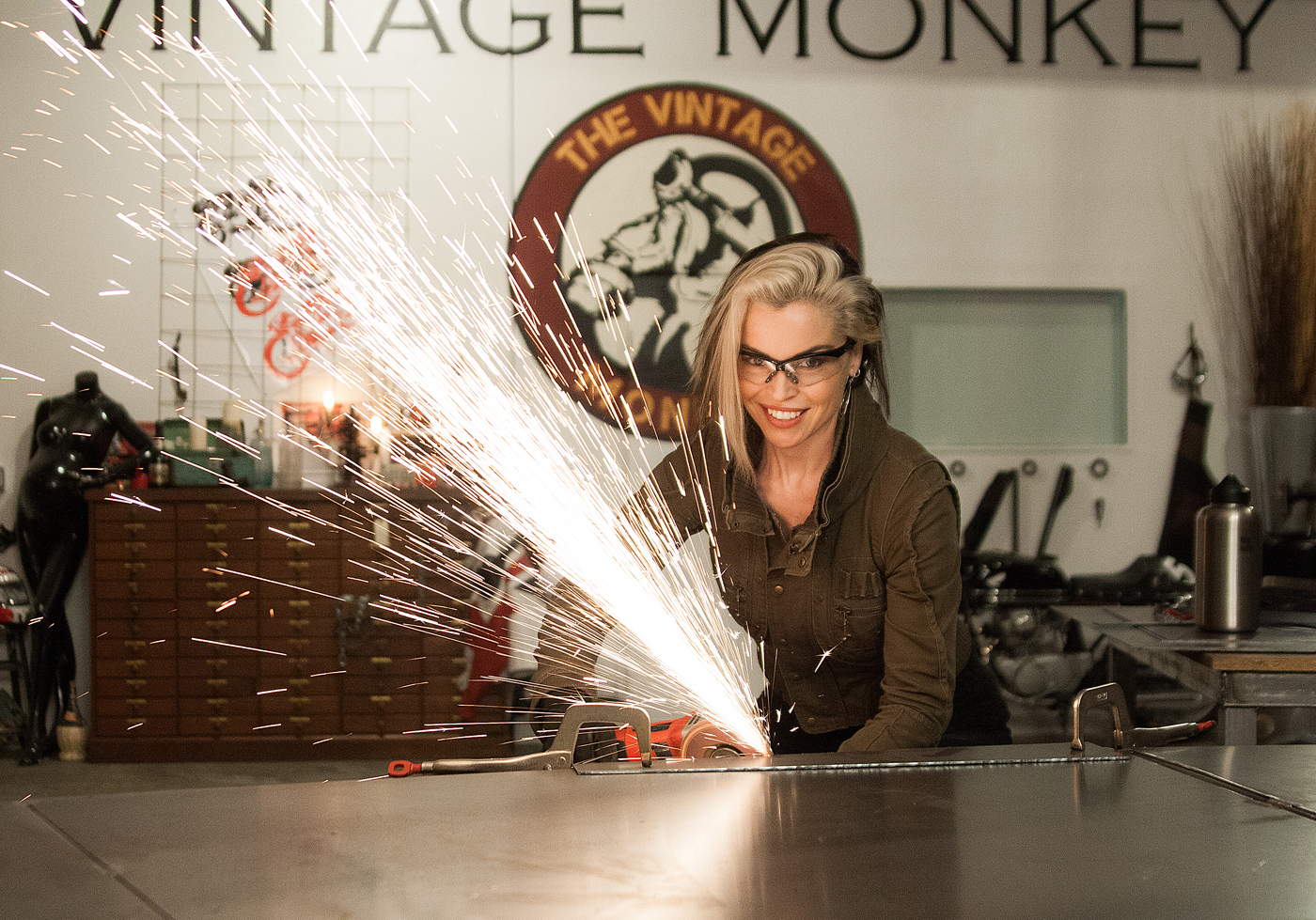 And if being gorgeous, talented, funny and charismatic weren’t enough, she’s kind-hearted, too. Each year, Smith collaborates with her friends, including Vintage Monkey’s service manager Dennis Jaron, on a custom motorcycle build that is auctioned off to benefit a charity. This year, she’s restoring a 1973 Honda CB750 into a racer, in cherry red, to benefit Sky’s the Limit Fund. When I asked her what drives her to do this very time-consuming project yearly, she responded, “Giving to those in need is always important, it’s as simple as that.”

OK, Shasta, will you be my best friend? I didn’t ask her this, because that would be awkward, but I did ask her what advice she has for women who want to go into business for themselves (a much more chill question).

“If there is one piece of advice I can lend, it is to stop thinking about doing it, and just do it,” says Smith. “The regret of not going after your goal is worse than experiencing failure.

“I am the example of someone who has a rabid passion and made it happen. No one wanted to invest in my company. So with some pep-talks from a loved one, I took the advice that, ‘You can do this yourself,’ and ‘If you build it they, will come’ … and boy, did they!”

Vintage Monkey is located at 400 N. 16th St. in Sacramento and is open 10 a.m.–6 p.m., Wednesday–Sunday. Find out more at TheVintageMonkey.com