Flatlanders and the Golden State 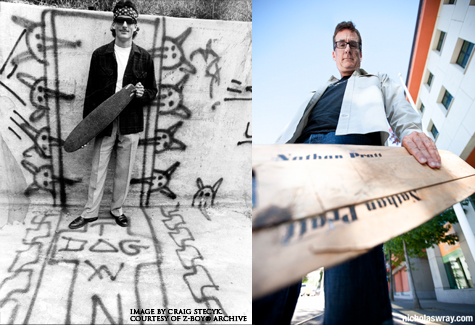 Skateboarding started as a gimmick, a toy of sorts, equivalent with the hula-hoop. Born on the beaches of Southern California, it quickly branched out into one of our longest lasting youth cultures. In the early ‘60s it was a DIY affair but it flirted early on with manufacturing, and in 1975, with the advent of surf-inspired maneuvers, it became a national phenomenon.

Today it’s everywhere. Kids skateboard daily in our streets, chased and harassed by business owners and police alike. Skateboarding has inundated our popular imaginations, from professionals in soda commercials to CGI references in blockbuster movies like Lord of the Rings and Pirates of the Caribbean. Likewise the character behind skaters has changed, from the combative punk gangs of Thrashin’ (1986), which starred a young Josh Brolin, to the recent Karate Kid (2010) remake, where Jaden Smith carries his skateboard halfway across the world as a symbol of his American roots. Sacramento will soon be taken on a ride through the history of skateboarding via a new exhibit at The California Museum. Riding Concrete: Skateboarding in California is curated by one of skateboarding’s seminal figures, Nathan Pratt.

When the biggest leap forward in maneuvers and tricks happened, when skating changed from manuals and terrestrial 360 spins to Bert slides, pool airs and ollies, Pratt was there. In the heydays he was skating alongside Stacy Peralta, working at the Zephyr Surf Shop, and hanging with legends of the sport. Pratt was a cast member in the documentary Dogtown and Z-Boys (2001), and now he’s put together a collection of 300 boards, which follow the development of skateboard history. Ask him about these objects, these artifacts of post-war America, where they came from, what was going on at the time, and Pratt instantaneously lights up. His grin gets bigger, his eyes glint, his gestures widen as he recalls how the most significant thing of his childhood in the mid-‘70s evolved into a global trend by the turn of the millennium.

The collection of artifacts and photographs spans the development and history of an activity long synonymous with California beach culture. It begins with roller-skates, it’s supported by DIY decks made by kids in their high school woodshop classes, it’s bolstered by flirtations with surfboard manufacturers, it contains a diverse set of materials–including wood, fiberglass, and metal–and the exhibit comes to life once the skateboarders themselves start their own companies and take charge of the manufacturing.

Embedded in the development of this gimmick/lifestyle/cultural commodity are a series of “deaths” where the manufacturing implodes, and skateboarding’s popularity declines. Our cities and states have steadily made skateboarding on private and public property illegal, citing liability concerns. Yet despite all of this, skateboarding continues to thrive as a lifestyle. Pratt walked Submerge through the exhibit and detailed this interesting subgenre of California’s history. 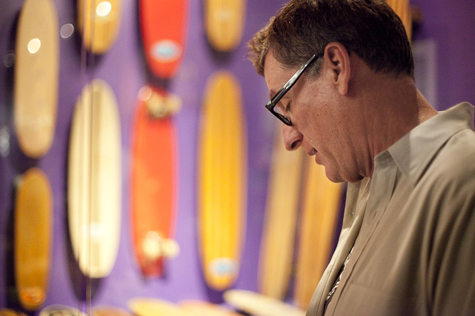 How did you get involved in curating this exhibit?
I did an exhibit in Santa Monica at the California Heritage Museum about a year and a half ago. It was the most popular exhibit that museum has had in over 20 years. It was supposed to be a six-month exhibit and it turned into a yearlong exhibit. It was the first time anyone had actually pulled it together to do a comprehensive exhibit on the skateboard, soup to nuts.

OK, but how did you get involved?
Craig Stecyk [co-writer, Dogtown and Z-Boys] told me about the committee. I hate going to committees. I hate going to meetings. I went to one and said forget it. I called three months later because I had a couple of boards I was going to drop off, and nothing had happened. The lady said nothing is cooking. I said, “I can make 10 phone calls and this show’s on! But only if I don’t have to go to any committees. I’ll take care of everything for you.” Five days after that phone call I brought in 1,200 skateboards, which we narrowed down to 300.

Where did you get the boards?
There are five or six big collectors in California. You have Dale Smith in San Diego, Todd Huber at SkateLab, Jason Cohn in Los Angeles (he works for Nike). And these guys spend hours tracking down these boards, every weekend, on the Internet, at garage sales. They’ve got it all racked out in their homes. I’d bring in a carload, 100 boards and drop them off at the museum and they’d have to tag and photograph each one. They got a little mad because I brought in so much! Most of the pro boards came from the pros themselves.

You’ve got a lot in this display; how did the skateboard get started?
Scooters and anything that rolled started it. It finally got big enough around 1969, and they’re all red. I’m not sure why, I think it was a roller-skating thing. In the early ‘60s there’s the space race, and the graphics are all rocket ships. They put the JFK quote on there and everything. You can see the mass-market pieces here; these were selling at Woolworth’s or something. They were small boards at the time.

Bill Richards made the first commercial skateboard. He was making boards in 1963 at a woodshop in Whittier [Calif.]. Hobie Alter got pissed because they were selling his boards like toys. He owned the number-one surfboard company in the world at the time. Six months later he came back and saw what happened and he got his boards made again. The Val boards [made by Richards] have a top layer laminated side by side.

And this is when the surf companies really got involved?
The surf companies start making skateboards next: Jacob surfboards, Hermosa Beach; Khan surfboards, Santa Monica; Hobie surfboards, Dana Point; Gordie surfboards was, I think, Huntington Beach. The Phil Edwards is the first pro rider model. Edwards was the best surfer in the world, he rode for Hobie. But Makaha made the skateboard for him. Hobie wouldn’t make him one.

Then the whole thing crashed in 1966. Injuries and liability insurance killed the teams, and the cities started outlawing skateboarding. You couldn’t ride on the sidewalk because the city would get sued. This happened all across America. The manufacturers died out, the whole thing went underground. You had to make your own skateboard again. 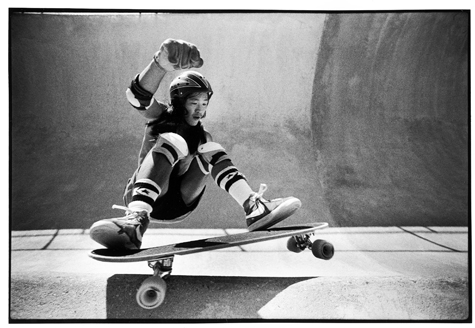 One of the fundamental changes to skateboarding was the adaptation of urethane wheels, which are still used today. When did that take place?
Clay wheels broke apart; they had serious problems. In 1972 the urethane wheel came in. It changed everything. It had fantastic grip, you could go five times faster.

Larry Bertlemann was the best surfer at the time. He was doing these super low cutbacks, touching the waves. The Bert cutback was the big thing. We started doing that on our skateboards. We’d do it so hard, until you slid, until it would make this noise. People would hear this noise and know exactly what you were doing. You were doing a Bert. We couldn’t have done that without urethane wheels.

This is where things really change for skateboarding, when surf maneuvers get involved. How did that come about?
After the 1975 Bahne-Cadillac Nationals. This was the first big-time contest. That’s when everything changed from stand-up style. We were the new kids doing the surf style, the Bertlemann style, the modern style. In a few months everyone was skating like us.

Then we started skating pools. There were pool skaters just riding around, but we were the first to go up to the lip. We were doing vertical surfing, going up the wall. In September 1977 there was a pool in Santa Monica everyone used to skate at, and that’s where Tony Alva popped out one day. That was the birth of aerial skateboarding. 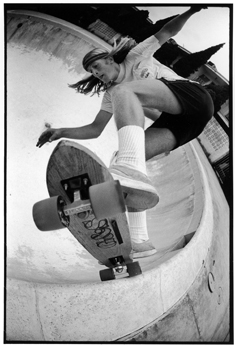 How did that affect the development of skateboards?
Pool riding took over everything and the boards got wider and wider. This was the second big coming of skateboarding. These are the pig boards, with a kicked tail. We started doing the aerials on the pig boards, and we realized when we’re flying through the air we want a lighter board. We needed width in the front and width in the back where the feet are, but we didn’t need it in the middle. We started cutting away the wood, making the fish-shaped boards. We made some crazy shapes for fun. Then they made bumps for grabbing the board.

Christian Hosoi was the king of big air. I’m sorry, but he blew Tony Hawk away. Hosoi was unbelievable. It wasn’t even close. Period. Straight up. He got busted for drugs, went to jail for five years, and that’s why Tony Hawk came up. Hosoi was an artist. Hawk was a mechanic. He was tall and geeky like me. Hosoi had the perfect physique. We did a skateboard show for Nickelodeon, and Christian was doing 10-foot aerials on a ramp, and narrating what he was doing while the interview was being filmed. The guy was amazing.

What happened next?
The next crash was in 1990. It might have been part of the recession. It had something to do with insurance again. Powell was the biggest company at the time. They had the mega-team, with Tony Hawk. Then Steve Rocco started his own company, World Industries. He just did the most insane stuff and put Powell out of business. The kids wanted concaved deck skateboards, and Powell wouldn’t make them. So the whole team quit. They started their own companies. There were no more old guys in the business; everyone was 20 years old.

How did street skating and the new school develop? How did that change the boards?
Natas Kaupas and Jesse Martinez started the street thing. They did the wall riding and all those rails and stuff. You wanted a lighter and smaller board for the street. The ramp riders wanted double enders because they were doing all the inverts and reverts, forwards and backwards now. Then they came down to the popsicles. [Plan B Skateboards’] Rodney Mullen really invented the popsicle boards. He was a freestyle guy, another techie dude.

All of this is in the past now, what do you see as the future of skateboarding?
We can’t imagine where skateboarding will be in 20 years. It will definitely be a lot more radical than it is now.

Riding Concrete: Skateboarding in California opens at The California Museum in Sacramento on July 2, 2011 and runs through March 24, 2012. For museum info, go to Californiamuseum.org.