In With the New

Ride along with Submerge for its fourth-annual Bicycle Mural Tour. Yes, that’s right: the journey inspired by street art returns and features some of the city’s newest pieces—blasted in the alleyways of businesses like the Wilkerson Theatre on 25th Street, or covering a vacant building near busy railroad tracks. As this story gradually developed, via random bike rides and a few wrong turns throughout midtown and downtown, an underlining theme emerged from the select layers of paint: Change is ever-present. As more corrugated and concrete walls in Sacramento become skillfully decorated canvases, some veteran pieces fade behind new concepts and transition into mere memory. Submerge revisits and remembers one mural in particular, highlighted in 2012, by self-taught artist Skinner. His longtime homage to the monsters of heavy metal at the former Java Lounge coffee house on 16th Street was recently painted over with a new mural by artist Mynas. Much like the flux in businesses, the spot now hosts Good Hands Barbershop. In this year’s feature, explore the hidden designs of the outdoors, remember past works of art and pedal along with a magazine that will continue to document this ever-evolving art form. 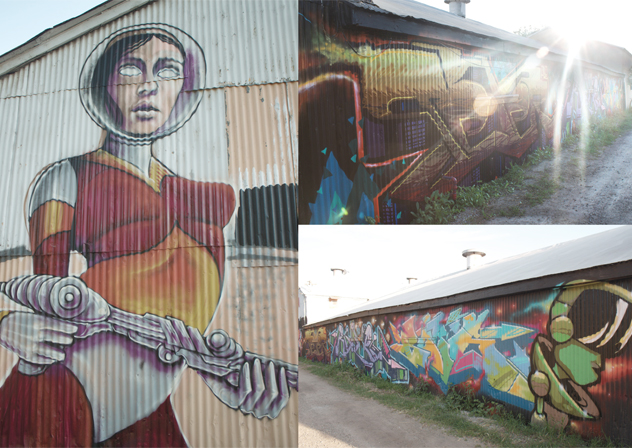 The Wilkerson Theatre
1723 25th St. (In the alley)
Sacramento

A full-bodied space woman in an orange and red uniform stares down at passersby. Her white eyes encased by a clear astronaut helmet and colorless, outlined arms hint that this mural is yet to be finished by artist Cyber Punk. Sharp letters in many shades of brown and yellow are accented by several blue and purple orbs guiding viewers from one end of the alley to the next. Clue: If an older man framed in gold with deep brown eyes appears, smoking a cigar, X marks the spot. 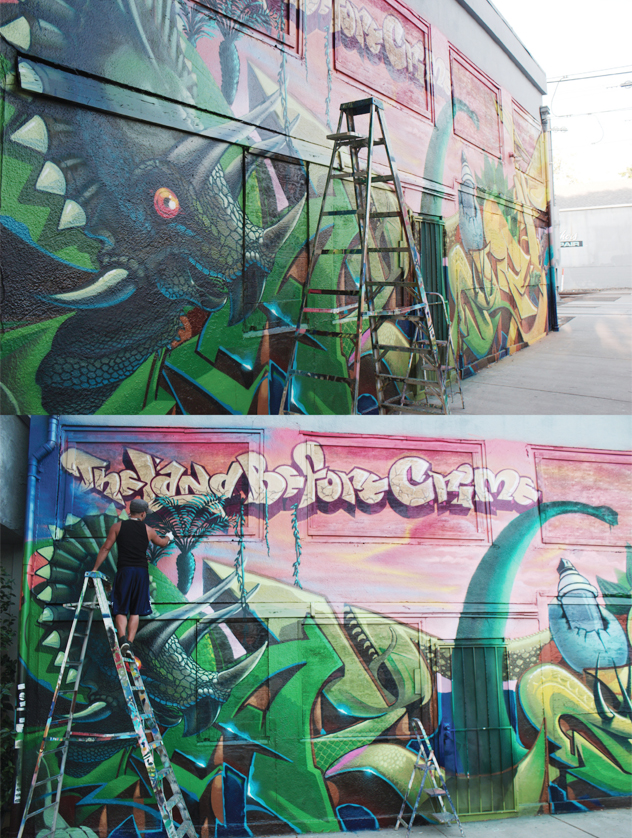 The Land Before Crime

A red van parked near the S Street railroad tracks reads “Mystery Machine” on one side. Its owner, artist Anthony Padilla, stands on the highest step of his paint-speckled ladder, and accents a navy palm tree with bright, aqua blue in the background of his mural, The Land Before Crime. Padilla says the owner of the building wanted a simple way to ensure that random incidents of tagging stopped. With this piece, he asks the public one question, “When will fossil fuels go extinct?” The query directly relates to the triceratops and pterodactyls featured throughout the plush scenery Padilla has created. “Instead of watching Miley Cyrus shake her flat ass, you could spend time thinking about serious shit,” explains Padilla. “This is the land before manmade laws. There wasn’t a judicial system. Everything was down to the laws of nature.” 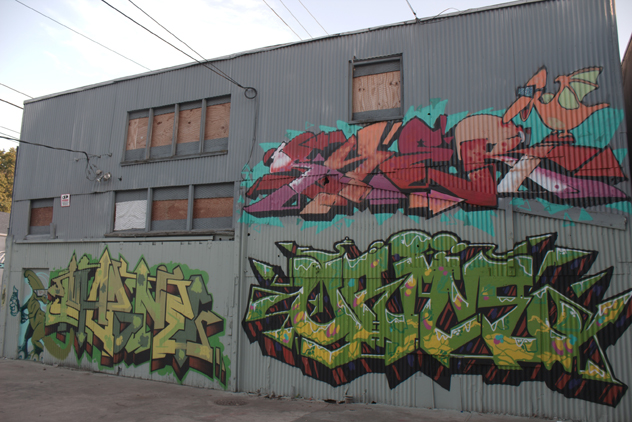 Channel the inquisitive attributes of a modern-day Sherlock Holmes and discover this mural not too far from Padilla’s The Land Before Crime. To find this bonus piece, bike toward the alleyway of new music venue Witch Room, then mosey past two blue dumpsters, and finally, peek around the corner near the railroad tracks to reveal a three-piece set of script and prehistoric creatures. One blue-gray dinosaur glares behind dark shades and clutches a can of spray paint. Although the ground is decorated by empty Ben and Jerry’s ice cream pints and cigarette butts, and a pair of shoes dangles from the power lines above, this hidden design is worth the extra investigative effort.

A police officer walks across a checkered floor and into the “style vault,” where stacks of gold coins act as a bread crumb trail of sorts. The word “end” is painted in gigantic letters in the foreground of this mural, with intricate details and color painted in each letter by artist Mynas. The piece quietly ends with the officer fast asleep on a wooden stool next to a box of glazed donuts. Owner of Good Hands Barbershop, Joshua Green, recently opened his business in March and says he simply wanted to start something fresh for the city. So, the choice to paint over Skinner’s mural of monsters was made. “I feel I made the right call,” explains Green. “I made sure I found the right person. It’s not like I said, ‘Screw it. It’s got to go.’ The art that was done previously by Skinner was kind of demonic with blood and people’s heads getting cut off. I got families and kids coming through here.” Eventually, Green wants to keep the wall in question as a rotating art space filled with layers by future artists. “I left a section up there that I had Mynas leave alone. It’s not 100 percent forgotten.” 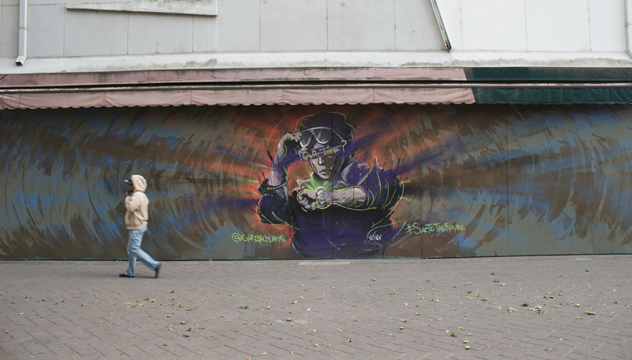 An ominous figure stands tall, his eyes shaded behind neon green words that blatantly ask, “Our time?” This is the latest mural by artist David Garibaldi (@garibaldiarts) on 7th and K streets. The piece presses the question of time, perhaps coincidentally or intentionally adjacent to what will be formerly the Downtown Plaza Mall. As the mural tour comes to a close, change again surfaces. This time, it’s found within the deep purple of this figure’s jacket, accented with vibrant green and warped and smeared in a brown and gray background.