Halloween is for Lovers

There’s only one thing as bad as getting religious literature on Halloween while Trick or Treating: a half-assed Halloween costume.

With various gatherings and parties to attend, costumes are obligatory. Even more daunting than simply dressing up, this year you…(lip-biting)… aren’t solo. You and your significant other have to think of costumes to wear together.

To avoid making a bad costume even worse with couple cutesy-ness, you’ve been trying to think of a good costume for two that is fairly easy to execute, is clever and funny (your friends have high standards), is comfortable and cost-effective.

Sounds as though, like many, you have found yourself in a costume conundrum.

Submerge has got your back. The following are just a few ideas that are sure to be hilarious and leave you with enough money in your wallet for a good beer.

The best costumes ever are ones that play on social satire or are throwbacks to more ridiculous times in our youth. A box of Franzia, a “bear-fucker,” Sarah Palin, “Dick in a Box” and Beyonce’s “Single Ladies” back up dancers are some hilariously, infamously good costumes.

There are three rather important points that need to be kept in mind for Halloween.

Taking into account these points, here are a few suggestions: 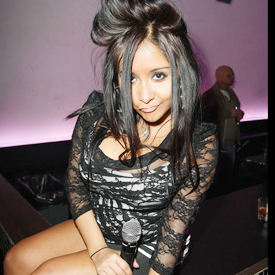 These two costumes from MTV’s Jersey Shore are super easy and possibly extremely entertaining, which is why half the people out and about will be dressed as one of these two. But the trick is all in the execution.

For Snooki, try picking a season or particular episode. Season One Snooki is a great version, and there are two ways to go with it. Grab a brightly colored trucker hat, a long black wig, some big/nearly clear bedazzled sunglasses, a tight T-shirt, some spandex workout capris and carry around one of those huge, individually wrapped pickles and you could be “Snooki at the Shore House.” With the exception of the pickle ($2) and the long black wig ($15—$25), you or your friends probably have everything else you might need to complete the look. You can walk around and say, “You guys, pickles is my thing,” in your best New York/Jersey accent.

The second Snook-look is “Snooki on the Prowl.” Slip into any tight-fitting and short stretchy dress in black or leopard print and take previously mentioned black wig and get your “poof” on. If you don’t already own a Bumpits (no judgment, honest) to get that big, mound of lift hair look, you can grab one at your local Target ($10). With this Snooki, you can spit out lines like, “My ideal man would be Italian, dark, muscles, juice-head guido.” And, “I’m not a guido, I’m a guidette.”

For both looks, a bad fake tan ($8 bottle), hideous fake nails ($5 press-ons), fake eyelashes ($4) and an upper lip so brown it looks dirty will ensure an accurate costume. Check out and memorize more quotes online at Jerseyshorequotes.com.

For “The Situation,” take any T-shirt with a design on it and buy some rhinestones ($3) and glue and get to bedazzling. Get creative or use one of the many acronyms reapeated by the cast. “GTL” is a good choice. Do the same to some dark jeans and put too much gel in your hair. Smile and talk out of the left side of your mouth about “grenades” and “zoo creatures.” Be sure to don sunglasses and lift up your shirt often to display your abs (or some drawn-on ones). 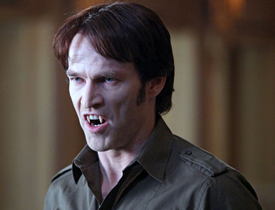 Oh True Blood! The characters of True Blood are so sexy, salacious and bloody good. The third season finale that aired Sept. 12 left viewers to “bite” their time until next summer to see what’s next for part-fairy, telepathic Sookie and 174-year-old Vampire Bill.

Bill is an easy and comfortable costume for dudes. Dark-colored jeans, shirt and jacket are easy enough to come by. Plastic fangs should be only a few bucks. Baby powder can help give your skin a lighter pale color and red lipstick can be used to create some “blood” around the mouth. The southern accent, mysteriously furrowed brow and gentlemanly demeanor will make this costume great–all are free. 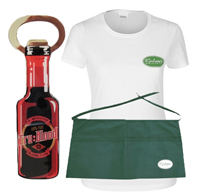 Dressing as Sookie is a slightly different story. You can be waitress Sookie, serving True Blood at Merlotte’s. A white T-shirt (short or long-sleeved), black bottoms and green apron is all you need to wear. For the “Merlotte’s” logo, buy some iron-on transfer paper ($6—$10), recreate the logo using the Bankoli font in bold on any basic design program. Use a friend’s color printer, if you don’t have one, and iron it on the top left. An apron can be made easily from dark green fabric from any fabric store and the assistance of iron-on hem tape ($2). Finish the look off with a blond ponytail, a tray and a bottle of True Blood. You can buy manufactured True Blood–a blood orange-flavored soda–from HBO.com, but it will cost you time and money. A four-pack will cost $30 with shipping and can take up to a week. Mixing it with vodka doesn’t make it taste better. Try putting red dye in a bottle of strawberry soda and taping a True Blood logo around it. Be sure to paint the center of your front teeth black to simulate the gap in her teeth (black eyeliner works well, liquid is the best) and smile extra big to show it off, like when Sookie gets nervous. Bloody good show.

After her “scandalous” Sesame Street appearance in which she sang a kid-friendly version of her song “Hot N Cold” while playing tag with Elmo, Katy Perry has been the topic of comedic conversation lately. Having some huge honkers and chasing a furry puppet around could be considered lewd or extremely funny. Even Saturday Night Live picked up on it and featured a skit in which Katy Perry is squeezed into an Elmo T-shirt, her cups runnethed over, in a parody of the public’s sensitivity to children viewing the “tops of boobs.”

Ladies, you’ll need a light green outfit that is fairly bare on top. A tube-top or spaghetti strap shirt or dress should work. A short dark wig, three big fake white and pink flowers, and a piece of white lace netting acting as a mantilla-like veil will be necessary accessories. Bright pink lips, big fake eyelashes and pearl-like earrings are a must. You can fake-jog, sing and play tag with your dude dressed as Elmo.

An Elmo costume could be difficult, but here are a few suggestions to make it easier. Gentlemen, wear all red, paint your face and hands red and color your hair red with hair color spray ($6), paint your nose orange. Not down for the paint? Find an image of Elmo’s face online, print it out, glue it to a piece of cardboard, cut holes for eyes and adhere to a something to hold it up to your face. Speak in the third-person as Elmo and play tag with your Katy. You can make this funny by really getting into character.

This costume can easily work for ladies with dogs that can’t be left at home. Wrap your pooch in some fuzzy red felt for a puppy Elmo.

Or go alone (it’s good to have options) as SNL Katy Perry; in an Elmo T-shirt cut down the middle, plaid skirt, clear black-framed glasses and pigtails.

Hope these ideas help solve some costume conundrums and get some hearty, alcohol-induced chuckles. Boo-yeah!