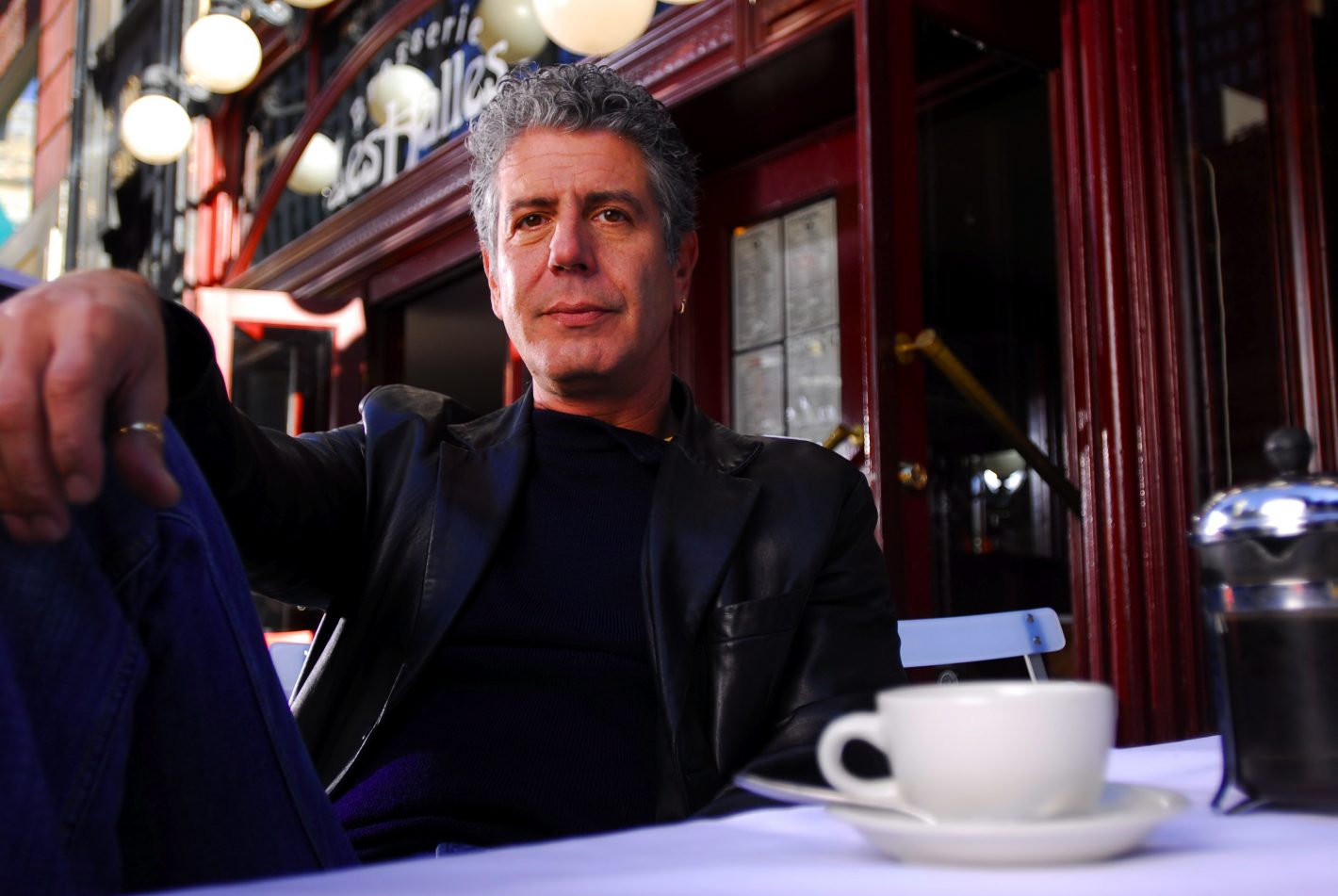 Photo courtesy of The Travel Channel

Anthony Bourdain is the very picture of the jaded, over privileged foodie that he used to despise. No really, it says so right here on page 195 of his latest book, Medium Raw: A Bloody Valentine to the World of Food and the People Who Cook. Truth is, you’d be hard-pressed to find anyone even remotely interested in food who doesn’t love–maybe even idolize–the guy. The self-proclaimed “former chef” earned the now well-worn and maybe even up-for-retirement title of Bad Boy of Cooking 10 years ago when he dragged into daylight the up-‘til-then unspoken (in public, anyway) seedy stories from the back of the house in his best-selling chef’s memoir, Kitchen Confidential: Adventures in the Culinary Underbelly.

Bourdain’s hard edge has dulled a bit, due mainly in part to the arrival of his daughter Ariane, now 3 years old. Lest you think he’s gone all soft, however, please reference No Reservations, his Emmy-winning show on the Travel Channel wherein the viewer is still treated to the gritty, behind-the-scenes international culinary escapades with Bourdain’s rolled shirtsleeves, jeans and a series of bleeped out expletives here and there; or even Medium Raw, stuffed to the gills with that hilariously acerbic wit.

The book’s chapters delve into both personal reflection and up-to-date food-related queries, ranging from ammonia-treated hamburger to the merits of “Mother of Slow Food” Alice Waters’ near-ascension into foodie sainthood, from his list of culinary heroes and villains to his desire to keep Ariane from the throes of McDonald’s at all costs. These mini-manifestos are still peppered with the guffaw-inducing yet unappetizing terms and visuals: “Trying to conjure a descriptive for salad must be like one’s tenth year writing Penthouse Letters, he writes in his bitingly titled chapter, “Alan Richman is a Douchebag.” “The words ‘crunchy,’ ‘zing,’ ‘tart’ and ‘rich’ are as bad as ‘poon,’ ‘cooter,’ ‘cooz’ and ‘snatch’ when rolling across the brain in predictable, dreary procession.”

Properly braced to talk food and, ahem, bodily functions, but instead regaled with pontifications on the current affairs of cinema and the idea of adoring baristas as rock stars, Submerge spoke with Bourdain about his upcoming lecture at the Sacramento Memorial Auditorium, the topic of which not even the speaker will know until he arrives on stage. “It’s going to be like Spinal Tap on tour,” he says. “You know, without the entourage, the equipment, the rest of the band…one night only, in and out.”

I saw in your bio that you even give team-building talks?
Yeah, that was kind of weird for a while. Early on, I was [part of] a speakers’ bureau. And I was invited mostly to do the sort of corporate retreat talk. Shortly after Kitchen Confidential, Harvard Business Review had done an article, a really big article, outlining the takeaway from Kitchen Confidential, sort of extrapolating strategies and tactics for managing. And for me, it was like a vicarious thrill for managers of companies who could never actually institute any of the policies or management strategies that I was able to in the kitchen. I mean if you work for a bank, you can’t fire somebody with no warning and no notice, just for listening to Billy Joel. I used to do that [laughs].

Really? Billy Joel?
Yeah, I think enjoying the music of Billy Joel or the Grateful Dead excessively was grounds for dismissal. I just couldn’t work with you. It was problematic. But I think there were those in the business community who got a vicarious kick out of imagining how great that would be if they could live their life like that or with companies like that. So I did that for a little while, but very quickly the bulk of my speaking engagements came from promoters who book theaters and sell tickets and put me in just to talk about anything, more like a band than the usual lecture circuit.

And there’s nothing else on stage with you. Just you and a mic and whatever comes to mind.
Yeah. Me, a mic and a local beer.

This book seems to mirror your approach to these talks. It almost seems like a bunch of mini-manifestos. I half expect you to say, “And another thing!”
[Laughs] Yeah, you know, I write like I talk. And in fact, two or three chapters in the book were kind of put together on the road. I wrote them in my head as I was standing on stage, talking to audiences. It’s sort of an immediate way to find out whether a sentence or a paragraph works. You get that immediate feedback from an audience. Is this funny or not? You find out awful quick in front of 2000 people.

What was the impetus behind the book? I know some topics arise while you’re giving talks, but there’s other, more personal…
Well, Kitchen Confidential is still selling like crazy; it’s been 10 years, it’s still a big book, selling very well all over the world. And my life has changed so much in 10 years, and the restaurant business that I was writing about in Kitchen Confidential has changed so much in 10 years, that I felt it was… I don’t know whether I’d say important, but I wanted to update things. I just thought it was worth saying, “I’m no longer a chef. This is how my life has changed, and also the business I was writing about has changed so much, let’s look at these things.”

Talking about change, there’s a genre of the food celebrity on the Food Network, but it almost feels like there’s an undercurrent of another type of food celebrity. The New York Times did a story on butchers becoming the new rock stars. And I’ve worked with baristas who are the super hipster cool cats…
[Laughs] Yeah. You know, I don’t know… I certainly like the idea of butchers being empowered in the way that chefs were. I think that’s a good thing. But…at this point, I don’t know. I just don’t know. I’m suspicious as to whether we’re going to start seeing barista-related programming or whether there’ll be rock star baristas… But let’s hope so! Better a barista as a star of a reality show than Paris Hilton or Kim Kardashian, for sure. At least they’re doing something useful. But I don’t know. I think they might be taking that a little seriously. We should be learning that from websites and blogs, rather than the Times’ dining section.

It seems that if you’re spending time around food and writing, music tends to be right up there. Do you have a particular music you listen to either when you’re traveling, writing or cooking?
For cooking, I like a pre-disco funk. Bobby Womack, Curtis Mayfield, James Brown, I love that era. Iggy and the Stooges are still prominently featured on my iPod. Old [Rolling] Stones, some more recent stuff but not that recent. I’m certainly not plugged into new bands at all. I don’t have time. I’m amazed at my friends who stay really current on the latest indie bands and spend a lot of time listening to new music. I envy them that they have the time. For me, there’s still movies and some television shows that I really like that I don’t have time to stay up on.

What do you watch when you have time?
Mad Men. Treme, I’m very, very excited by. I mean with The Wire, David Simon, I think anything he does is amazing. Breaking Bad I like, though I’ve fallen behind there. I think it’s kind of awesome that movies are so bad now that television to some extent has sort of taken up the slack. They’re telling stories on television of all places and no way would Hollywood allow those stories to be told in films. Try to imagine The Wire in a film or a series of films. It would never happen. Or Breaking Bad. I mean, a high school science teacher turned meth-cooking hero? I think that’s kind of a reason to hope.

On to your show, No Reservations. This last season just started.
We’re ending our sixth season of shooting and will be going out on the road again in the fall and shooting our seventh.

Do you pick the locales?
Yes. Absolutely. That’s the number-one most important part of the equation of making television for me. I get to choose where we go, and I decide with my production company and with my partners and camera people and editor–I decide how we’re going to tell that story. I have to say, I’m really grateful to my network for letting me do that. I have an unprecedented amount of freedom to tell the stories I want to tell, where I want to tell them and how.

I’ve read Cuba is a place you haven’t filmed but that you’d like to. Is there a place you would not like to go, or not like to return?
I’m not so happy in Eastern Europe, as it turns out. Central Asia, the ‘Stans, I don’t really have a feel for. I don’t like clean, orderly countries with no social problems. I like hot, messy, passionate countries. I’m sick. I’m a Mediterranean at heart.

I have to ask, only because I thought it was hilarious. Do you really initiate black propaganda with your daughter when it comes to McDonald’s?
[Laughs] Um… maybe I exaggerate a little bit. If it comes to that, I will, though.

And I’ve read she’s already got a pretty experienced palate.
She’s Italian like her mama. And we spend a lot of time in the town where my wife’s from. I bring them with me to Europe a lot. So it’s not like we’re trying to make her into a little foodie, she’s just growing up around a lot of interesting food choices. You know, she sees her mother and father eating interesting foods, then she’s free to grab stuff off our plates. Now and again, we’re surprised by what she likes.

So, Alice Waters would be impressed with how she’s eating?
Yeah! They’re a lot alike, actually, Alice and my daughter. She eats only organic food, she likes Paris, so yeah she’s got that going for her.