Take a Load Off 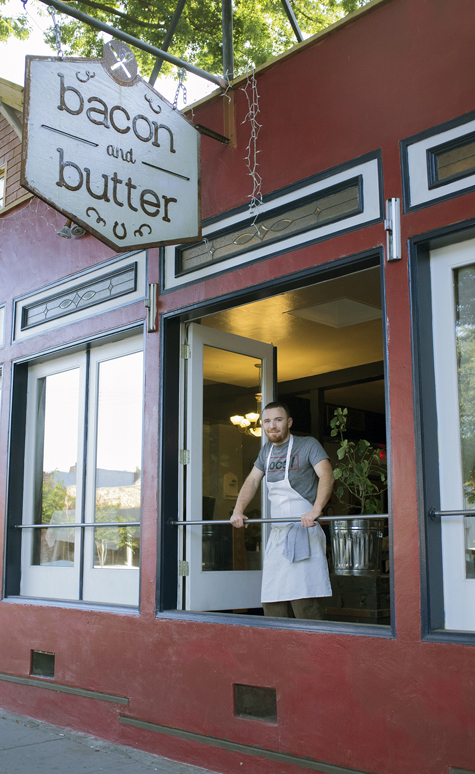 Our parents were always quick to emphasize taking our time when they were nurturing us. Chew your food. Walk don’t run. But the age old axiom to stop and smell the roses seems lost in our modern culture of efficiency and impatience with download speeds, commuter traffic and restaurant ticket times. Local chef Billy Zoellin’s new breakfast and lunch restaurant Bacon & Butter is a friendly reminder to take our time, because even slowing down is valuable.

At 28, Zoellin has climbed the ranks of local artisan cooks at an impressive speed. He began as a busser at BIBA and Andiamo, while still in high school. When he wasn’t keeping the tabletops orderly, he helped with prep work out of a natural curiosity with the kitchen, which he claims is in his blood. 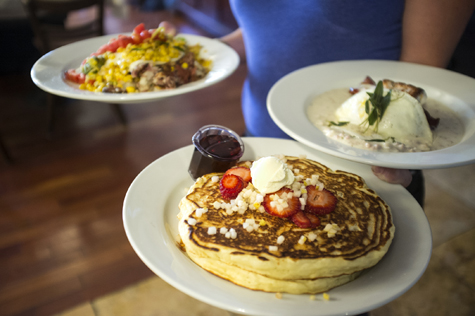 “My grandma used me as a kid for catering,” Zoellin said. “It went from being a busser and enjoying cooking to having a kid and needing a full-time job. So, I quit baseball and started cooking.”

His fast rise in status continued with his education at the American River Culinary School. After enrolling as a student, he quickly became a TA. From there it was prep cook at Mulvaney’s. It was only his third job in a kitchen. When he took over the head chef job at Golden Bear last year, his menu caught the attention of Food Network’s Diners, Drive-ins and Dives. “Everywhere I’ve gone, I’ve never been satisfied,” he said. “It’s part of my personality, I’m very meticulous with how I like things. If I see something I like, I will follow until I can go off on my own path with it.”

With 18-and-over nightclub Bar Fly, formerly and ironically called Club 21, in need of a liquor license, Zoellin was asked if he was interested in opening his own restaurant in the front of the building.

“This place is a club at night,” he said. “For liquor licenses you typically need food. Instead of working for other people and signing off on my menus that I create, the items I put my heart and soul into, I decided to do it for myself. It was time to roll the dice a little bit.” 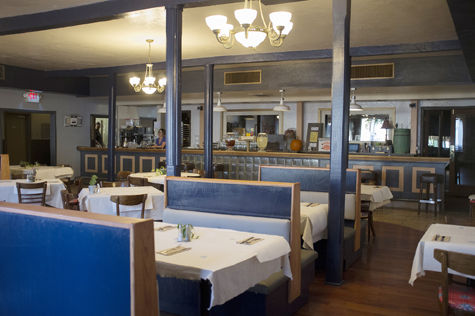 On such a fast track with his career, Bacon & Butter appeals to a need for Zoellin to slow down in order to adapt to the learning curve of running his own business. Early criticisms of Bacon & Butter (located on 21st Street between K and L streets) mostly leaned on an annoyance with the wait, either for a table or the ticket time. It was an issue not lost on Zoellin and his staff.

“Our biggest issue has been time,” he said. “But I challenge any one of those critics to open a restaurant and serve top quality food in a timely fashion to 500 people on a weekend and see how it goes. See how many weeks it takes to get that ticket time down and have everyone feel good about their meal.”

It was said not out of frustration, but as a matter of fact. It’s the sort of challenge that would make for a great new Food Network competition show. Zoellin hopes his patrons will come to Bacon & Butter to enjoy the simple pleasures of a well-prepared meal with many appealing environmental guarantees. At Bacon & Butter the meat is all grass-fed; the bacon is nitrate-free; the vegetables are sustainable, seasonal and local fare; the bread comes in daily; and the coffee is from Old Soul.

“We’re not a greasy spoon. We have a commitment to local and seasonal fare,” Zoellin said. “Breakfast places will cut corners because prep time is at a minimum. Here you won’t find a lot of boxes and bags in the back. You won’t find a freezer. We want to make things from scratch like grandma would or mom would.”

Was it not always worth it to wait for grandma’s made-from-scratch cooking?

The morning I visited Bacon & Butter, I cleared my schedule and allotted myself a rare chance on a weekday to eat breakfast–a ritual usually limited to a pot of coffee or Cheerios. Mayor Kevin Johnson held a business brunch of 30 that same morning. The meeting was scheduled to begin at 8 and end at 9 a.m. I arrived at 9:10 a.m. to two empty tables littered with discarded napkins, used utensils and plates with only sauce stains remaining. It’s unwise and unfair to criticize a new restaurant’s ticket times, especially when it’s an owner not named Paragary, but given the efficiency apparent from that morning’s remains, Bacon & Butter have worked out the kinks. 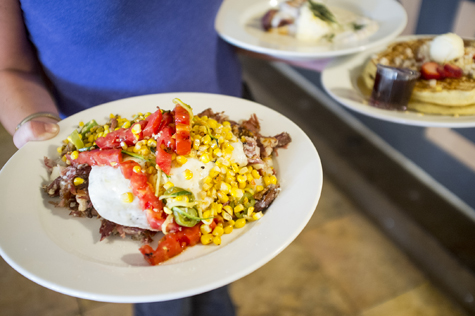 My mountain range of country potatoes, hash and eggs over easy, topped with corn salsa was well worth the wait and a larger portion than I expected for the price. The hash needed no salt, while the corn salsa had just enough jalapeÃ±os to give it a subtle kick in spice. The server ribbed me that I barely put a dent in it, but it felt as though even if it was only a rolling hill spread, I’d eaten my fill. The menu at Bacon & Butter is crafted for the adventurous or even the average Joe or Jane. If biscuits and gravy or flapjacks are all you need, your desires will not be compromised.

“I’ve cooked a lot of dinner in my career,” Zoellin said. “It became a challenge of how do I apply what I know to breakfast and make it acceptable. You put fried sage on things and have your whimsical takes on fare, while staying within the guidelines of local, sustainable and always seasonal.”

As I sat post-meal near the bay window alternating sips of Old Soul coffee, a mason jar of water, and a mason jar of Greyhound, I took in my surroundings. Chef Zoellin told me for their refurbished interior, they had a picture in mind. It was of a sharply dressed man in the Depression era going out for a job interview. The idea was to create a place that man might have stopped into for coffee. The interior is of simpler times, when items were handcrafted and plastic was barely existent. Above the community table is an old wash bin, hung upside down from the ceiling, with a clock that never quite ticks on time attached to the bottom. Small light bulbs hang from the bin to light the table. It is both a piece of history and a piece of modern art. Along the outer walls are plywood-framed photos of cowboys (frames built by Zoellin), and shelves hosting trinkets that Zoellin found in antique stores.

“It fits my personality,” he said. “It fits what we do, putting a sustainable practice to recycled and refurbished products. We are modern post-Depression era, that’s where we are.” 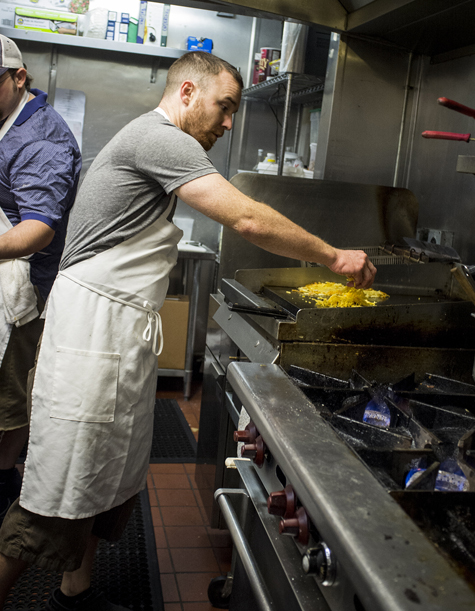 As Zoellin and I sat with the community table within an arm’s length, I had to know, “Why do you think people fear the community table?” After a good laugh and a shared confusion, he offered, “Don’t be afraid to sit next to a neighbor.”

“Start a conversation with someone,” he went on. “Ask them ‘how’s the hash?’ Maybe their review will help you decide what to have next time.” He’s not giving up on his experiment to get his customers to relax and say hello to their fellow neighbors. He hopes that someday the community table will be the place to sit, rather than a compromise. For now, his regular, Dave, sits there most mornings, reading the paper and making small talk with the service staff. Strike up a conversation with Dave sometime.

Yelp is an outlet for blowing off steam. If you want to read a review of Bacon & Butter, flip through the encyclopedia pages in your check booklet that’s dropped off at the end of the meal, an idea Zoellin stole from Mulvaney’s. In it, you’ll read short and sweet thank you signatures of people who hope their favorite items never leave the menu and who can’t get enough of those pancake shots (a treat I intend to try on my next visit). These are the messages from people who took the time to hand-write their appreciation in ink, rather than blog bullet points in haste. 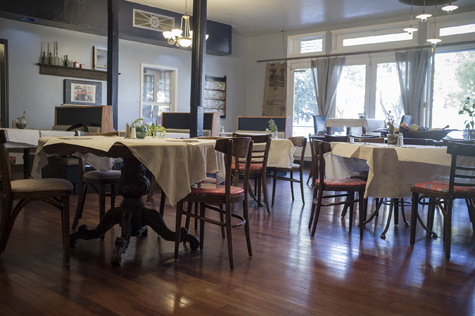