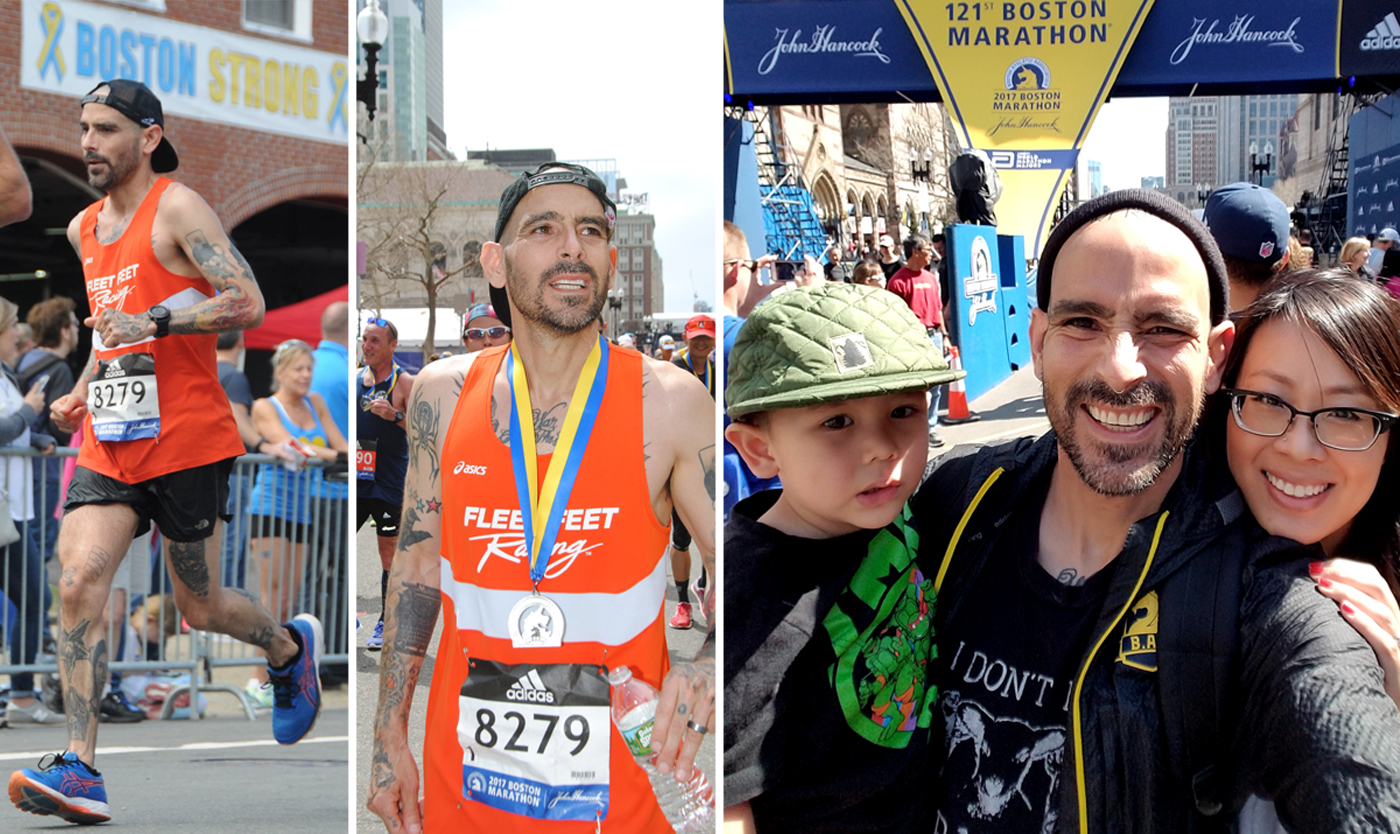 Yeah, I cried. Like, real tears. I’m not talking about some pathetic, single anime teardrop. Not some bullshit-ass, Lil Wayne face-tattoo tears.

Nooooooo, not you, David Bowie! tears.

And that was only by the one-mile marker.

We were in the outskirts of Boston, in Hopkinton, a small tree-lined suburb that didn’t look familiar at all because I’d never even been there before, yet everything was so nostalgic. Hey, look at that tree! Waaaaah! Ohhh that’s a beautiful house! Waaaaah! This pavement! It’s so … pavement-y! Waaaah!

I’d like to say I don’t know why I was crying as I ran toward mile two of the Boston Marathon, that it was some nebulous wave of emotion that crept upon me like a starving house cat, but I know exactly what happened: Life is fucking weird, man.

The City of Marky Mark

I grew up in Boston. It’s a city I love, but a place that formed my prepubescent psyche, so ingrained in the formation of my war-torn body and old, glitchy mind that it’s no longer just a city; it’s a catalogued collection of “firsts.” Boston is where I first learned to tie my shoes. Where I found out that teachers weren’t always kind. Where I ran away from a gang that was going to rob me. Where I gave my first awkward kiss to an awkward girl in an unmonitored corner of our elementary school. Where I learned the hard way that authority should always be questioned. Where I skipped school and rode the T to play video games in Downtown Crossing. Where I shoplifted my first piece of clothing from Filene’s Basement. Where I got into my first fistfight.

Here’s a story: Once, waiting for the train in Brookline, I saw Jordan Knight, one of the New Kids on the Block, waiting for a train going in the opposite direction. I don’t know why, but I flipped him off, and then he flipped me off back and did a little dance move—a dumb little flick of his hips, paired with a tip-toed Michael Jackson maneuver. He wore these leather pants with silver stars going up the leg, and I flipped him off again for dressing like an asshole. Then he got on the train and as it was pulling away he sat by the window and mouthed, “Fuck youuuuuuuuu,” all the while flipping me the bird. I picked up a rock, hurled it at the train and missed by at least 10 feet.

Boston is where I became a proper juvenile delinquent. 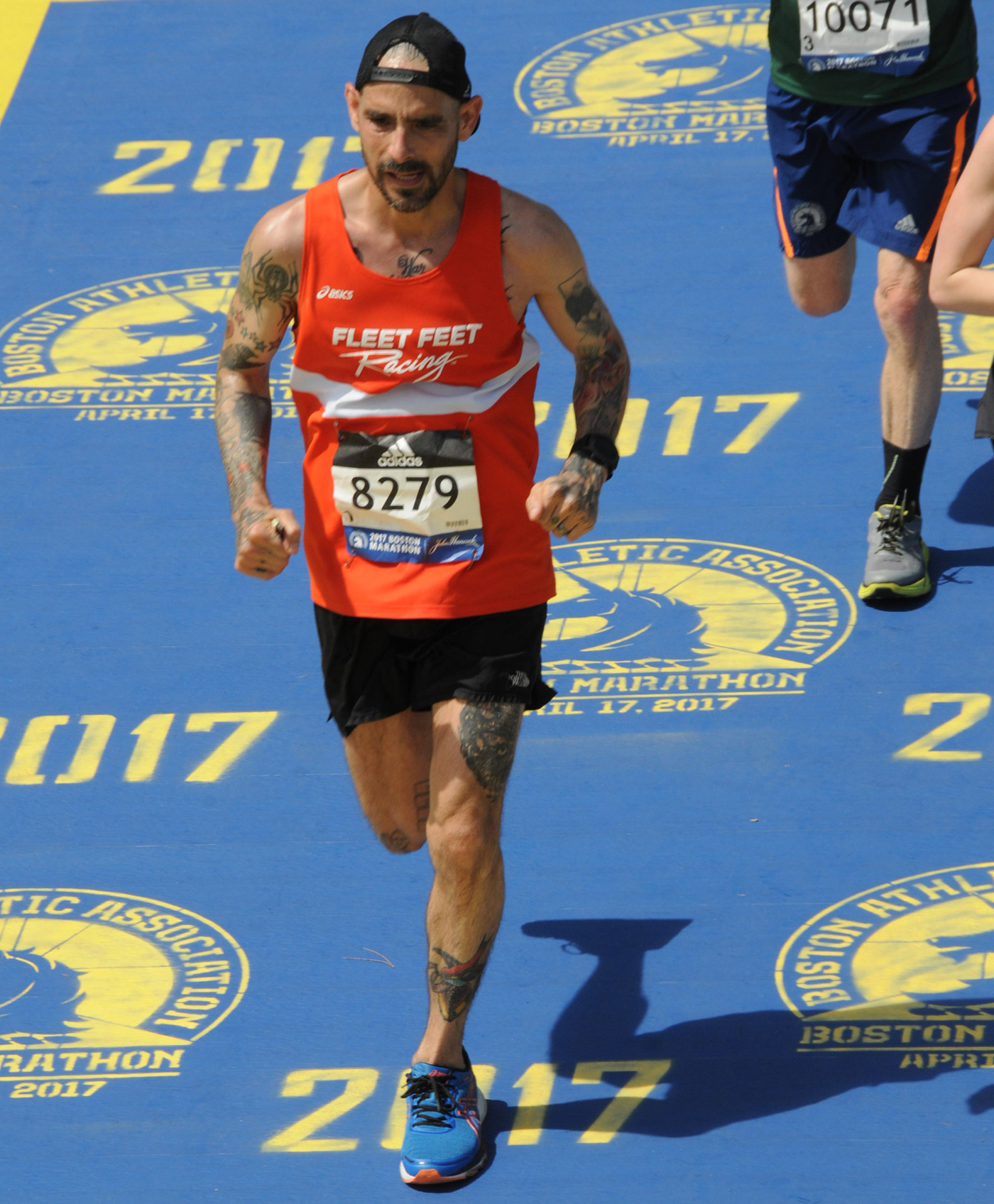 When I moved to California with my family in my early teens, I was well-versed in the ways of delinquent ninjutsu, a trait I honed until I left high school and moved back to Boston as an angsty teen, where I wandered around aimlessly, bumping Gang Starr in my headphones, hoping to get some sort of break in life. But I had no ambition. I worked in a bagel bakery and girls were repulsed by me. The only thing I liked were drugs. Lots of them. LSD, cocaine, meth, ecstasy, etc. And it wasn’t until I was fully immersed in a horrific drug culture that I started running. My friend Joe (who I met in kindergarten in a time-out box made for unruly children) invited me on a run. He was a student at Boston University on the track team, working at some fancy computer job. I was the opposite of that. My body was comprised of 70 percent whiskey, 10 percent cigarette smoke, 10 percent cocaine, 5 percent methamphetamine and another 5 percent black cloud of doom and uncertainty. I could barely run a block without having a heart attack. But that day I made it around the reservoir and I kept running. Maybe because running was my last tie to normal civilization. Maybe because it was my last connection to my best friend, Joe. Whatever it was, I started running more and more. I began to eat healthier. I stopped drinking. I quit doing drugs. Pretty soon, I was a runner. I entered short races, then longer races, and pretty soon I was running the 26.2 mile distance. Then the 50k distance. Then 50 miles. And now my doctor and my wife and family are telling me that I might be running too much. But I think part of me is afraid that if I stop running, even for a second, I will find an empty swimming pool, fill it to the coping with cocaine, dive in and never come back up for air. 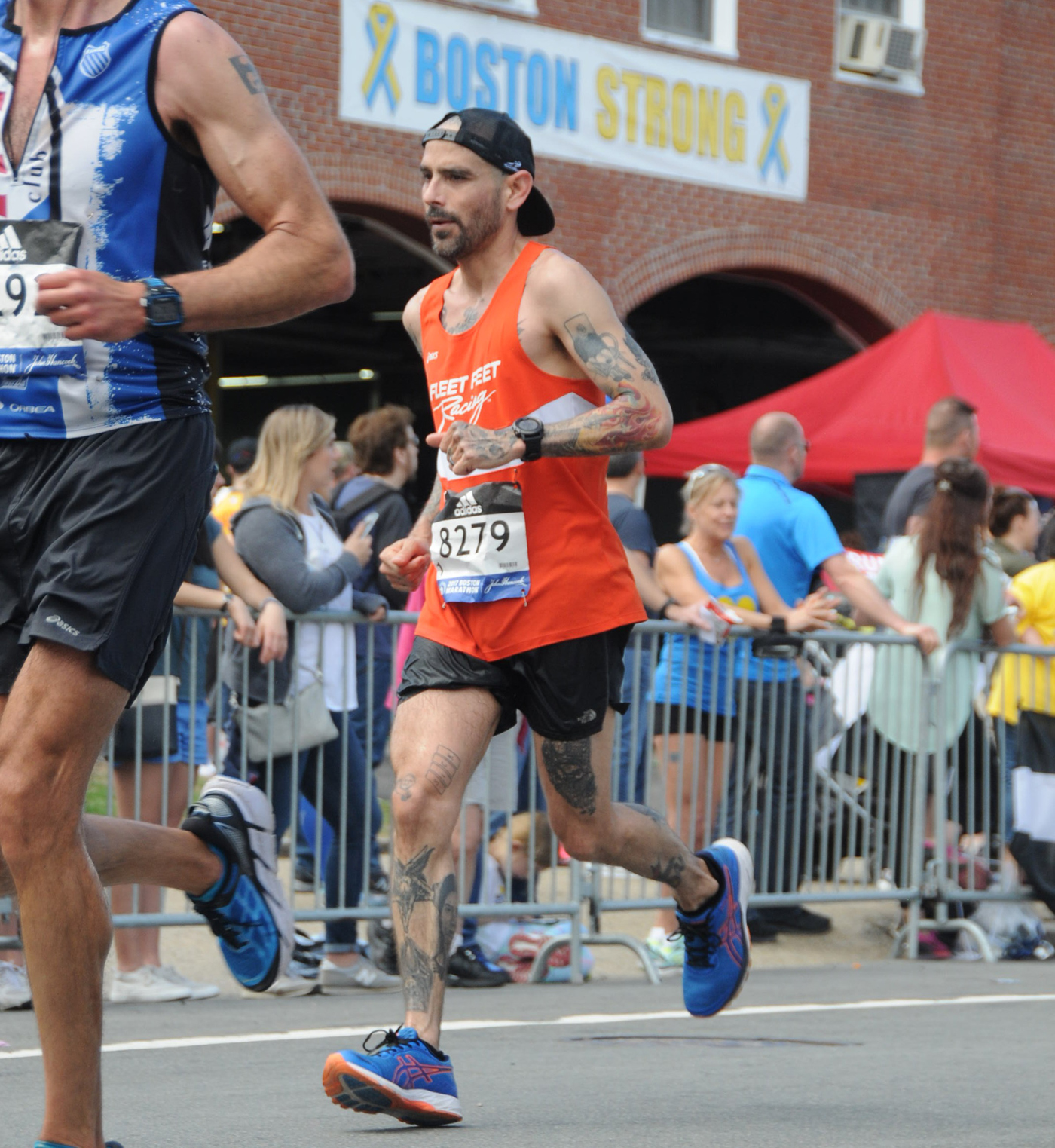 The Humility of the Marathon

The night before the Boston Marathon, I didn’t sleep. I wasn’t nervous the weeks preceding the race. In fact, I was so busy at work that I hardly thought about the marathon at all. But the night before, sharing a bed with my wife and son who had come to cheer me on, I tossed and turned and carried that unbearable feeling in my stomach, like the night before a report card was to arrive in the mail. It’s not like I’d never run a marathon before. The Boston Marathon was my 11th marathon, which isn’t counting the five ultramarathons I’d run previously. So why was I so nervous? It didn’t make sense.

The morning of the race, I groggily slipped on my bright orange Fleet Feet Racing Team singlet and took the train to the start line. I could never understand when people say, “I am so humbled.” That phrase never made sense to me until, of course, I was sitting in a porta-potty with my head resting in my forearms, palms dripping with sweat as a line of people waited for me to empty my bowels. Pro tip: If you’re looking to experience true humility, hold the door open for a beautifully fit runner woman while she enters the porta-potty you just destroyed.

At the start line, I watched two men from Japan adjusting their gear. Written on their shirts in sloppy Sharpie was, “Double Boston Marathon. 52.2.” In the wee hours of the morning, they had run from the finish line to the start line and they were about to do the second leg of their journey. Then I saw a kid who had broken his leg and was “running” the marathon on crutches. There were soldiers running in heavy uniforms.

Of course I could run the race. What the hell was I thinking?

I found the other runners from my Fleet Feet Racing Team and wished them luck.

“Have fun,” I whispered to myself. And then we ran.

Past Hopkinton, down the hills of Ashland, into Framingham to Natick (about 10 miles into the race). The thing about the Boston Marathon is that the city shuts down. Everyone is outside cheering. During Sacramento’s California International Marathon, angry drivers honk at runners blocking their paths, but on Patriot’s Day in Boston, it’s one gigantic party. I’ve never been to a race with so many elated spectators. The halfway point is Wellesley College—a private women’s liberal arts college—where the students stand at the scream tunnel with sexually suggestive signs like, “KISS ME. I USE TONGUE.” I’d never been so excited during a run. Some runners even stopped to make out with the students. I looked at my watch, so entranced that I was running a six-minute pace.

As the miles passed, it got hot and I was running way too fast.

In Newton (mile 16) came the first big uphill, which is where the first runners stopped, their muscles tightening to a point of injury. The heat, the constant pounding, the overzealous running at the start of the race was starting to catch up. Runners clung to the guard rails, crying, clutching their calves, locked into submission. Luckily, I felt fine, even though I had run the American River 50-Mile Endurance run two weeks prior. Maybe it’s why the hills didn’t feel so brutal. Even as we climbed up the notorious “Heartbreak Hill” at mile 20, I felt OK, knowing that once I got to the top it was all downhill from there. 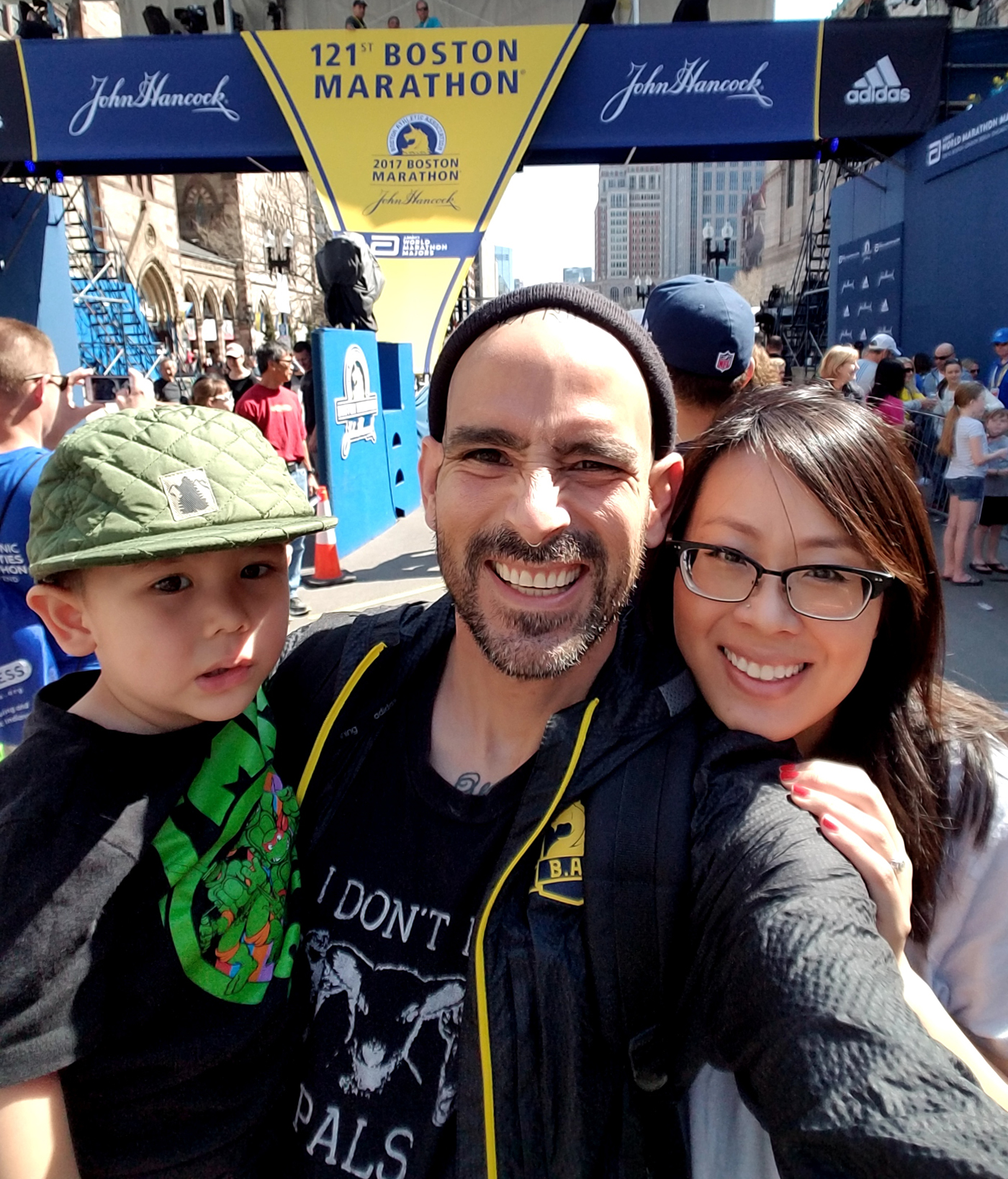 Of course, by the time I got to the top of Heartbreak Hill, I wanted to fucking die.

Running six more miles seemed impossible. But if there’s one solid thing drug culture taught me, it’s that you have to keep going until you can feel your soul leaving your body. So I did. I ran past Boston College, through Brookline, past the screaming Hasidic Jews. On Beacon Street, with only three miles left in the race, I couldn’t hear the crowd anymore, my calves twitching in Morse code yelling, “Stop running, you stupid moron.”

But I kept going, Boston’s illustrious silhouette glowing in the distance—the Citgo sign, a corporate monument of capitalism beckoning the runners like some false prophet.

And just like that, we were in the city, fallen runners scattered along the street, clinging to spectators, collapsing under the misdirection of their failing muscles. It looked like a war zone at mile 25 in Kenmore Square.

Turning onto Boylston Street I could hear the roar of the finish line, the memories flooding back: running from cops down Newbury Street; getting kicked out of the mall at Copley Place; being dragged to the Area D jail by undercover police …

Man, I wish I could explain, but the Boston Marathon is more than running 26 miles and 385 yards. It’s a commitment. To shedding old habits. To praising the body. To adoring your family. Cherishing friendships. To change. Improvement. To focus, loving every second you have left on this earth, speeding head-first into the unknown, muscles screaming in agony, tears soaking your clothes as you go, exhausted, exhilarated and beat down with a big, maniacal smile on your face. 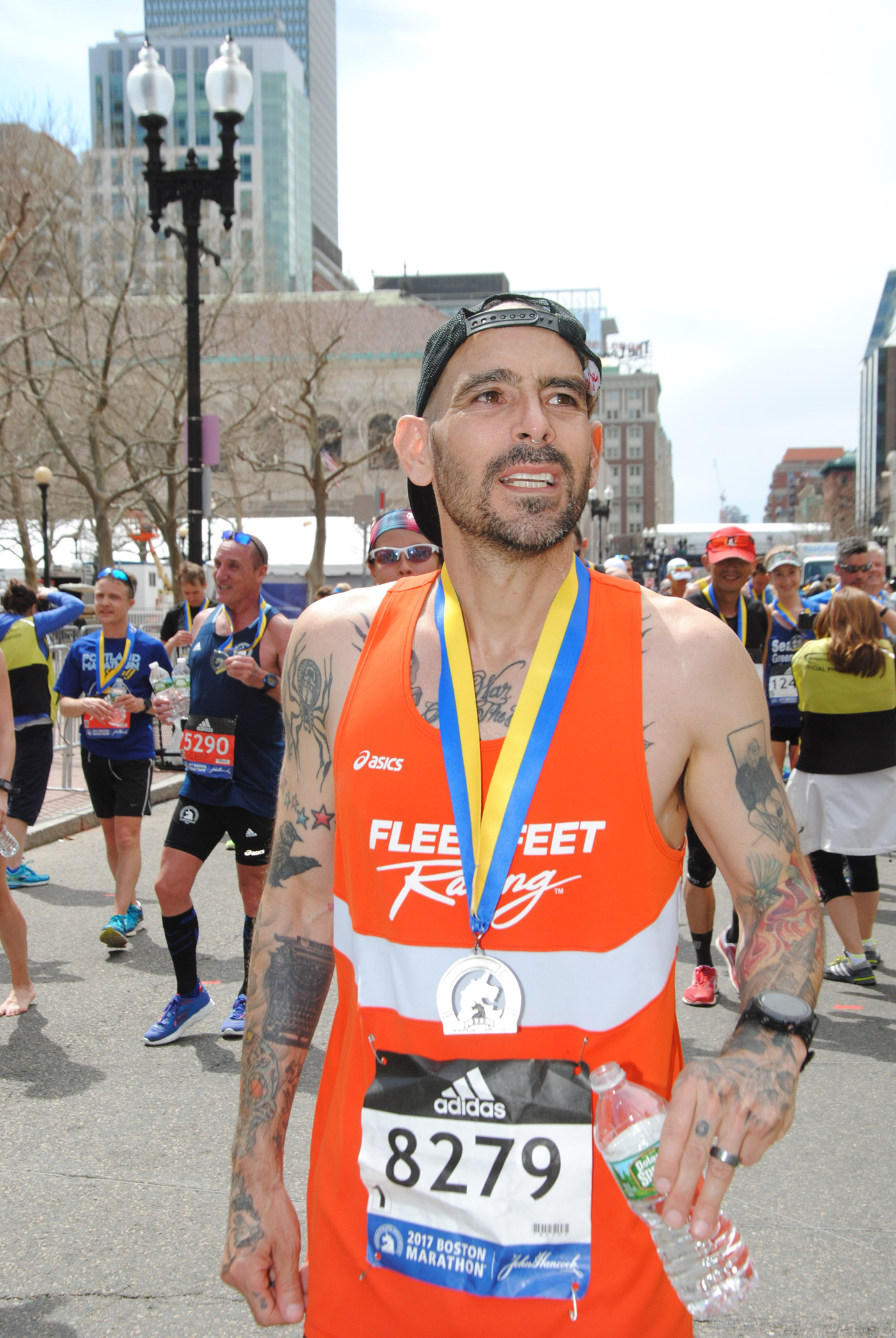