Mirra Mirra, On the Roll 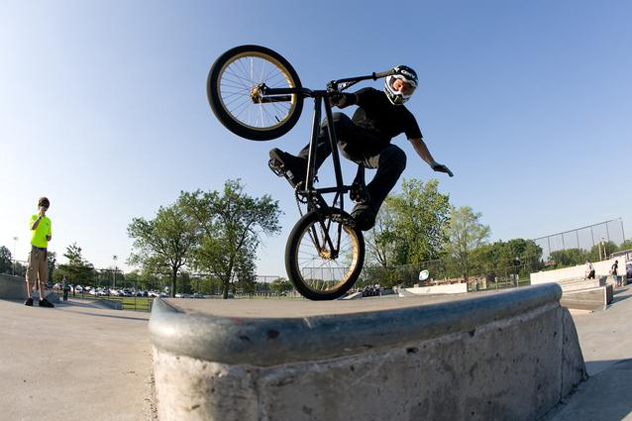 I firmly believe that age is a state of mind. If you walk around all day pissing and moaning that you’re “too old,” then expect some early gray hairs and a diet of Raisin Bran for breakfast. Fifteen-time X Games gold medalist Dave Mirra is the antithesis of this pickled state of mind, still ripping at 36. He’s not just hanging in there after an 18-year professional career; he’s meddling in competitions alongside the 18-year-olds and pulling off tricks that only he can do. His secret? A genuine passion for the sport of BMX.

“I still love to be on a program, and riding is part of it, and it probably will be for a long time even when contests are long gone for me,” says Mirra.

Don’t look for that day to come anytime soon, though. Mirra may have slowed his roll on the vert ramps just a bit, but only to take the wheel of a Subaru Impreza on the rally car circuit. Mirra has reinvented himself in the action sports world ever since he won the Long Beach Grand Prix Celebrity Race in 2007, and he’s ready to keep driving. His focus is a force to be reckoned with, and there’s never been much that could break that—not being hit by a drunk driver at the age of 19 and not even a recent battle with bacterial meningitis.

Mirra works pretty nuts, too, and he’s already healthy and set to race in the 2010 Olympus Rally in Ocean Shores, Wash., the third round in the Rally America National Championship. This 100-plus mile race through the rugged Pacific Northwest isn’t for amateurs. This just presents a new challenge for Mirra, who isn’t quite lacking experience.

“This is my third season, and I’m just starting to find some more speed,” explains Mirra.

The iconic BMX rider says that rally “is a great transition” for him at this point in his career and that “the fans have supported [him] as a BMXer who has crossed over.” And why wouldn’t they? Mirra is a true ambassador for the sport and will undoubtedly carry that over to rally car racing. Mirra took some time out of his schedule to speak with Submerge about going brakeless, his interest in fixed gear bikes and why it’s better to crash a car. 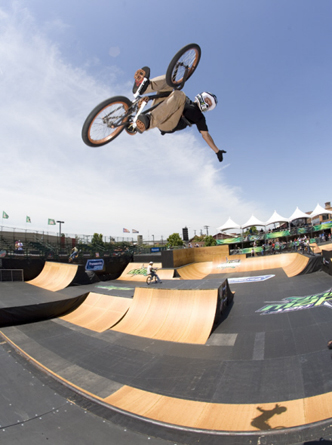 You’re on tour with the Journeys Backyard BBQ Tour right now. Man, you’ve been in the game for so long now; what is it about these kind of events that keeps you excited?
You love seeing fans and you love being out there doing what you do. It’s great; it’s kind of an addiction I guess. You think sometimes you get burned out and you want to stay home, and then when you’re home for a while, you just can’t wait to get back out and do what you do. I don’t think it will ever go away. It’s just a good feeling to be out there and talk to people, sign autographs, ride and just stay in touch.

Are the younger kids hyped to see you at these tours and demos? Do they know what’s up with Dave Mirra?
If they’re real young, they may not know the legacy, but I think they get in touch pretty quick. Generation after generation are into action sports, so it’s cool to keep promoting it and keep exposing it to different generations. It was a cool era when it was brand new to everybody in the mainstream world. But I think now it’s more accepted. For the younger kids, it’s there for them. It’s kind of like skate parks—we built them back in the day and now they’re there. It’s great to see the kids are out there doing it and coming out and supporting it.

Throughout the years, have you seen trends come and go within the sport of BMX?
Oh yeah, for sure. Kids come and go all the time. There are guys who are really amazing and you never know. Especially competitive; they may do really well at one contest and then they disappear. It’s weird how people change. Their levels of expectations or longevity—I’ve seen it come and go for years and years.

Obviously practice keeps you on point, but what’s been your routine for maintaining the skill level on your bike? Anything out of the ordinary?
I love riding. I don’t ride as many hours as a lot of the young guys these days, but I have my daily regimen. When I’m home it’s definitely at least two hours a day, maybe four. It really depends on what’s coming up and what’s around the corner. It’s still great to get out there and the feeling you get and still being connected in some way; that’s important to me.

For those of us out there who don’t know too much about BMX, what are some of the advantages of riding brakeless?
I did it just because I was putting a new bike together, and it looked really interesting. There are not really any advantages. It’s really kind of tough and more technical for sure. On some stuff, you look at like Garrett Reynolds; he always sticks out in my mind. The stuff that he does brakeless is amazing. It’s so much precision, and you just have to be exact. That’s why Garrett is real fun to watch. I saw that and I said, “I’m not going to put them on,” when I was putting this new bike together and just to make it interesting—make it more fun and more questionable, I guess. Just get out there and try something different. It’s been a long time and tricks are different, and you can learn more and do all that. It was more of a riding style. I tried and I liked it. I may put them back on this season; I may not. I’m not sure yet. 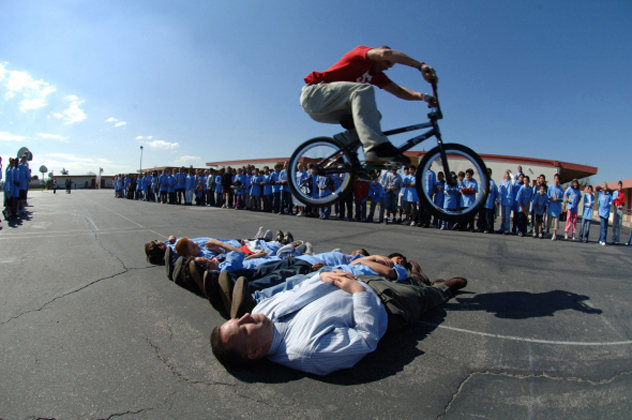 Speaking of brakeless, what’s your opinion on the track bike culture, especially the fixed gear guys essentially doing BMX tricks?
I think it’s really cool that we have the freedom to have these different groups and people we hang out with whether it’s BMX, skateboarding or rally car even. It’s a cult. In lifestyle these days, people get into a niche thing that they really like that maybe not everybody else does or even understands. So it’s cool. I hear a lot about fixed gears and the training and the leg workout—up hills, down hills. I’m like, “Man, I gotta try it.”

Your mental toughness and focus seems uncanny. You just recovered from bacterial meningitis, which can be fatal, and you’re already on tour riding and you’re set to race again in the Olympus Rally. What do you eat for breakfast?
Man, I’ll tell you what. I got lucky. I went up to [Philadelphia] to do some dealer visits for MirraCo., my bike company, and it was Wednesday, St. Patrick’s Day. I said, “Hey man,” to my sales manager, “I have a place in Syracuse [New York] downtown, why don’t we go up there? I got some cool friends. Let’s go and hang out.” He was like, “Cool, I’m never in this part.” So we drove up, we went out that night and had a good time. Nothing too crazy. Then the next morning, I wake up, go to breakfast and I get home, and I’m shivering. It was nuts. To the point where I could barely walk and the next day I said, “Man, I have to go to the hospital.” I ended up spending six days in the hospital. Then I spent another 10 to 11 days with a pick line in my arm on pretty gnarly antibiotics. But the outcome was amazing, and I feel great again. I’m pretty much back into doing normal things. So no long-term effects, and I’m here to race Olympus. I’m lucky for sure. 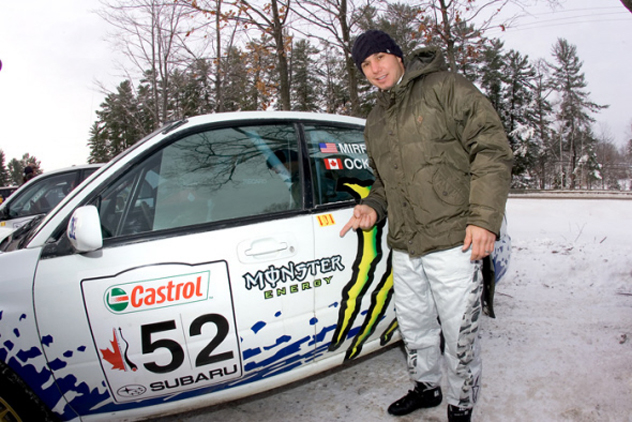 Speaking of the rally car racing. Before your first race, were people skeptical of you as a potential threat competitively? Like, here’s this BMX guy racing cars now?
I felt that a little bit and maybe I still do. It takes a long time to develop to be a competitive driver when you’re talking that level. You’ve got a lot at stake. You’ve got a car, and you don’t want to wreck the car. And there’s nothing worse than not finishing a rally. It stinks. One mistake and you know that if you had another chance, it would be no problem. It takes a long time, and confidence and commitment are huge.

When you wreck the car, it’s not like wrecking a MirraCo bike!
No it’s not, but on the flipside, wrecking on a bike hurts a lot. You’ve got a car wrapped around you, which is nice.

How did you get introduced to rally car in the first place?
I won the Long Beach Grand Prix Celebrity Race in 2007, and then I went up to Tim O’Neil’s Rally School for the fourth day of schooling. Ken Block came up with an extra rally car that I got to drive, and it was really cool. I was never really fully into rally, but once I did it was amazing—what it feels like and the capabilities of what the car can do. The opportunity came about, and now I’m on the factory Subaru team and they’re supporting me. The opportunity is just amazing.

It seems like there’s still a lot of people who aren’t familiar with rally car racing.
I think when people catch on and understand it—with as big as it’s getting right now—I really think they’re going to start digging it. Although it’s tough to watch, it’s on the verge right now. 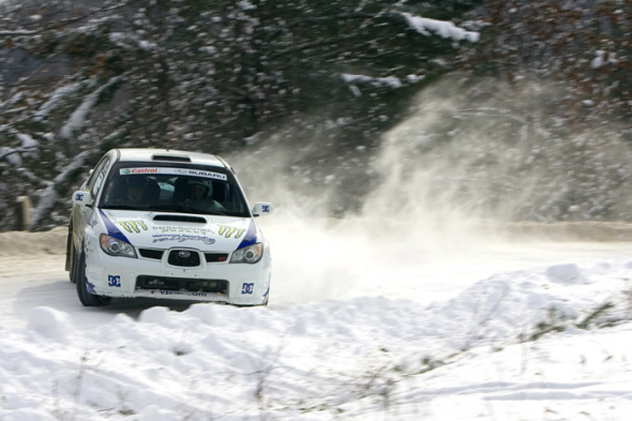 Is it consuming your time now? Do you see it having a bigger role in your life than BMX at some point?
BMX will always be a part of my life in some way whether it’s me riding with my buddies or else at home and still being a part of it. But I will say, yeah, I’m doing 13 weeks of rally this year and it’s great. I love it. I want to keep doing it, and I’d love to move into rally full time. BMX is still something I’ll always do, but it’s a great opportunity for me right now, and probably good timing as well.

Good timing how?
Age-wise and competing. There are so many young guys who are so amazing. It was great last year finishing second in the Dew Tour. It was huge for me because there were some really amazing guys that I had to beat out to get second. Garrett Reynolds won it, which was awesome; he’s 18 and I’m 35 and coming in second. Behind him I was pretty amazed. But it just takes so much work, the way those guys ride. I put on a contest in December last year at my warehouse and invited 17 amazing guys, and it was great to not ride it and be a part of putting it on and watching their faces and how happy they were and what it did for them. I had a lot of fun doing that, and I plan on doing that again this year. 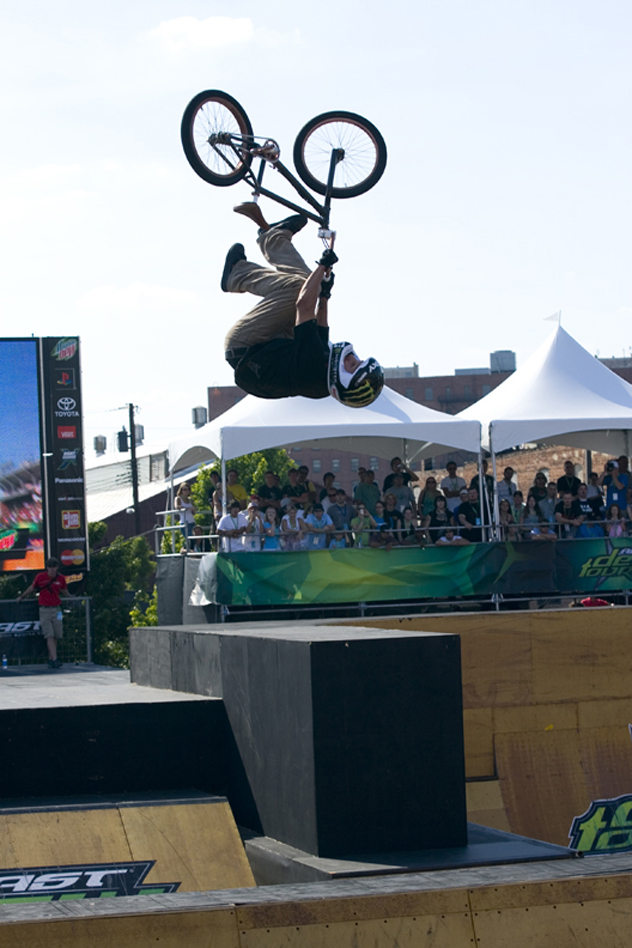 See Dave Mirra along with DC Shoes pro athlete Rob Dyrdek as part of the Journeys Backyard BBQ Tour on May 8, 2010 at the Galleria in Roseville. Bands Switchfoot, Fight Fair and others will also be performing. For more info, go to www.journeysbbq.com/sacramento.aspx.