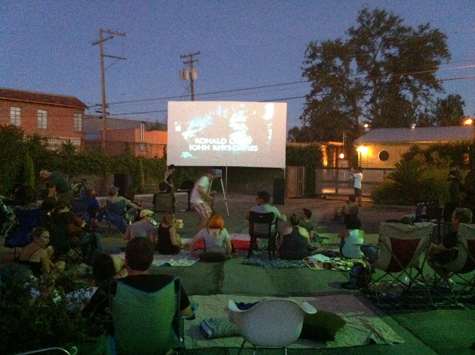 Submerge has never been so excited to hang out on Del Paso Boulevard. In the past two weeks we’ve experienced some of the best new recurring events our city has to offer on a street often shunned by Sacramentans. First was the REEL Bike-In Theater kick-off at The Greens Hotel (1700 Del Paso Boulevard) on Thursday, Aug. 2, 2012 where the classic film Raiders of the Lost Ark played on a giant outdoor screen to what Submerge estimates was 75 to 100 fun-loving attendees sprawled out on blankets and lawn chairs. There were pop-up shops from rad local vendors like Toro Quality Goods, food trucks like Wicked Wich and Heavenly Dog slangin’ grub, tunes played by 7evin, a beer garden serving Ruhstaller, cute dogs running around and the occasional “Woo!” or “Fuck yeah!” yelled after Indiana Jones cleverly defeated another enemy. This is, after all, a 21-and-over event. No screaming children! Just drunk screaming adults! It was glorious. “I think I saw about 20 people actually ride their bikes too,” said Matt Chong, one of the organizers of REEL. Full disclosure, Submerge drove (hey, it was hot that day) but next time we’ll be pedaling our butts over there. There are five more installments of REEL planned through October: Aug. 16 is Dogtown & Z-Boys; Sept. 6 catch Best in Show; Sept. 20 watch Waste Land; Oct. 4 Snatch will be airing; and the final REEL is on Oct. 18 when Exit Through the Gift Shop will play. Chong said he likes Del Paso Boulevard as a location for events like this, stating he thinks they “can make a nice little ecosystem here and let things grow organically.” Learn more about REEL at http://www.facebook.com/REELbikeintheater. 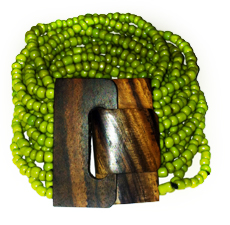 Just days after our REEL experience on Sunday, Aug. 5, 2012 we made it to our first GOOD: Street Food + Design Market after hearing everyone rave about it for weeks. GOOD has been going on every first Sunday for a couple months now, so they’ve really got things dialed in at their warehouse space located at 1409 Del Paso Boulevard. Put on by Unseen Heroes and Del Paso Boulevard Partnership, GOOD features innovative and artisan food and goods from local farms, vendors, jewelry makers, artists, etc. The guys from Phono Select were spinning some jams, Gypsy Mobile Boutique had pulled their truck into the warehouse, food trucks were out back in the lot, wine and beer was flowing everywhere; we instantly felt right at home. By the time we left we had in our hands fresh fettuccine made that morning from Pasta Dave, a basket of organic heirloom tomatoes and a grip of fresh basil from Feeding Crane Farms, a cute wooden buckle bracelet from JUST and a small container of pickled veggies from Edible Sacramento’s self-pickling station! It was seriously a blast and we cannot wait to have another GOOD Sunday on Sept. 2, 2012. GOOD is scheduled for every first Sunday through November, so mark your calendars and bring your family and friends along. It’s just $3 for adults, kids 17 and under are free. Learn more at http://www.facebook.com/GOODstreetfooddesignmarket