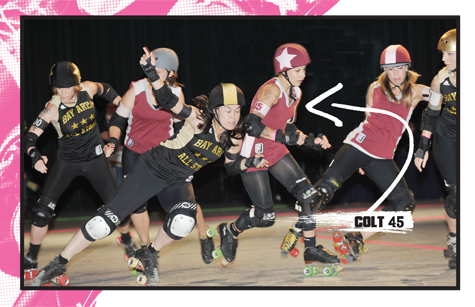 Think you’ve got what it takes to join Sacramento’s Roller Derby Elite?

Skip the tutus, leave the fishnet stockings at home and dare call any of them “derby girls.” For the women representing local derby leagues Sac City Rollers and Sacred City Derby Girls, roller derby is taken very seriously. Sure, the term “derby girl” stuck as the overall vernacular throughout the sport’s existence; however, you’ve been forewarned. For both leagues, derby is a full-contact sport that requires more skills and dedication than just rolling around on eight wheels. Derby encompasses the lives of each player, often dedicating dozens of hours outside of practice to improve their endurance and abilities for life on the track. Whether they’re teaching sixth grade science during the day or taking on the general manager position for their entire league, the women of derby are all in. Players from both leagues sit down with Submerge to squash the misconceptions and hand out tips for this season’s tryouts. Do you have what it takes to become a blocker for the Sac City Rollers or the next jammer for Sacred City? Find out from four of the leagues’ toughest competitors.

Besides the “derby girl” label, there are other misconceptions about roller derby that Josie Moody, or Colt 45 of the Sacred City team, the Sacrificers, says really bothers her. For one, the game is never staged and is very real.

“This is a sport, and we take derby very seriously. Plus, I don’t think we call 40-year-old women, girls,” says Colt 45 who adds all personalities and body types are welcome in the world of derby.

“You don’t have to be a big, burly person to play derby. There’s no one type of person that plays. It’s straight women, lesbians, transgendered people, people who are in law school, servers, CEOs, nurses [and] all sorts of people.”

Ranked seventh on the West Coast and certified with the Women’s Flat Track Derby Association (WFTDA), the members of Sacred City look forward to their season-opening bout, or game, on Friday, Feb. 8, 2013 at the Memorial Auditorium. Colt 45 says attending a bout is the best way to understand the physical demands of roller derby.

As a full-contact sport, derby calls for knee pads, helmets and mouth guards to protect all those pretty smiles, but for Aleitha Burns of the Sac City Rollers, which also recently gained certification with the WFTDA last year and looks forward to moving up the ranks this season, or as her team mates know her, Aleithal Weapon, the tutus and other glamorous threads shouldn’t be of importance when on the track. Roller derby is no fashion show.

“My biggest pet peeve is that people think that roller derby is all about hot pants and fishnets,” says Aleithal Weapon. “[We’re] true athletes. It is a real sport. It’s just like basketball or football or any other sport. The biggest misconception is that we’re all focused on our hot pants and our fishnets.” 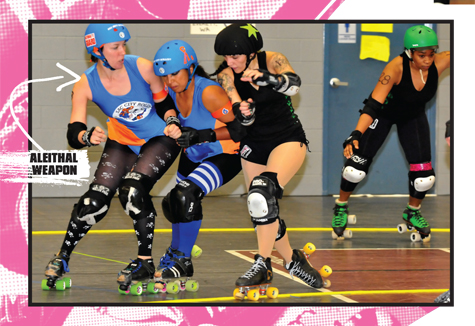 Colt 45 said it best, “You weren’t born wearing skates.” Certain women are natural athletes and move up the ranks within three months time in the world of roller derby, others, take a year or more. Despite the time it takes an individual to land a position on either team, Trinity Gleckler, aka La Lucha, of the Sac City Rollers admits to falling during tryouts over seven years ago–a lot.

“I started in the league’s birth in 2006. I didn’t know how to skate, and I had to teach myself through falling,” says La Lucha. “It took a lot of hard work.”

Hard work and the willingness to laugh at oneself according to Colt 45 are also important when it comes to derby tryouts. She says as adults the reluctance to fall in front of others paired with the acceptance of humility is a difficult feat for most.

“I was completely terrible at [skating] when I first started and I was terrible at it for a long time,” says Colt 45.

Being terrible in front of new faces sometimes invites the “shit talking” to begin as Lisa Zaniewski so bluntly explains.

Evil Shenanigans, or Evil, as her Sacred City teammates refer to her, says one cardinal rule of roller derby is having thick skin.

Still, falling in front of strangers and the whispers of others should be last on your list of worries when contemplating derby tryouts. Aleithal Weapon says derby isn’t a sport you get in shape for, but a sport you should be in shape for.

“My biggest top tip would be interval running where you get your heart rate up by running for five minutes, stop and do some other activity,” says Aleithal Weapon. “Studies show–I’m a science teacher–to properly build endurance, interval training is the best way to go, because you’re training your heart to be faster and slow down.”

Endurance is a major plus in roller derby, so Weapon suggests whether its wall sits while watching television, or squats while brushing your teeth, working those hamstrings and quad muscles as much as possible will only help. 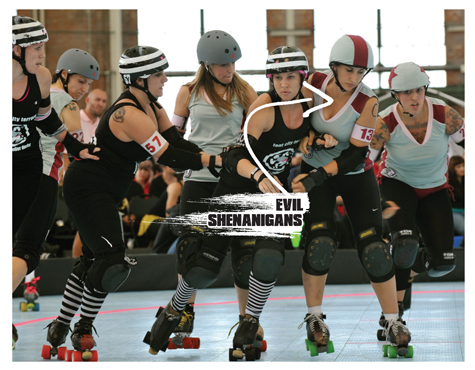 REWARDS AND WHAT TO EXPECT

All the women agree that there are no real requirements when it comes to tryouts. Gear can be borrowed and no skating experience is necessary, but it’s recommended to visit a rink and practice balance. In the end, both teams welcome any and all to try out and say not only will you experience a lifelong sisterhood, but gain confidence and assertiveness in all aspects of life.

“I’ve seen moms without any sporting experience come in and just blow my mind,” says La Lucha. “Join something that will change your life. It changes your life if you allow it to do so.” 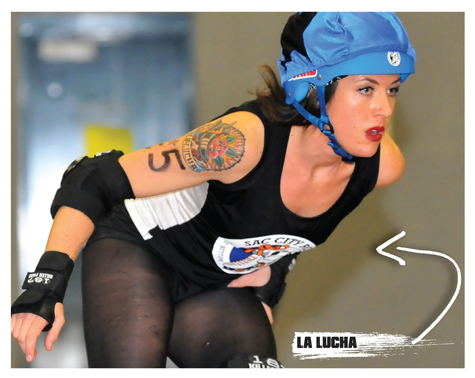 Think you have what it takes to join the Sac City Rollers? Visit http://saccityrollers.com/ for more information on their tryouts scheduled for Jan. 27, 2013. 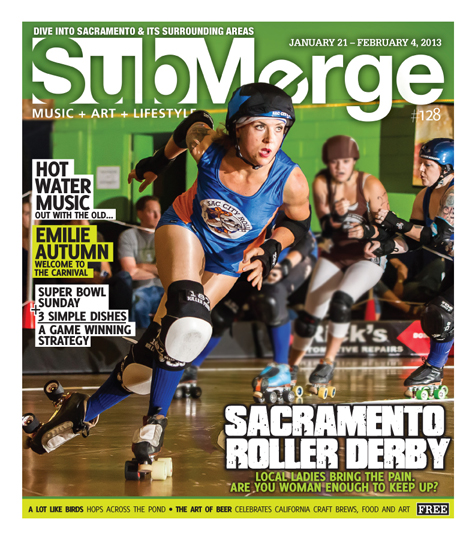