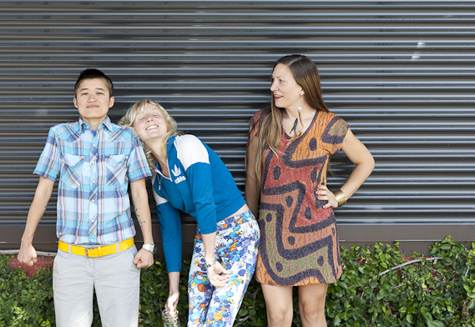 Fat Face inside the new Bows and Arrows

I’d exercise caution when saying to your friends, “Get your Fat Face on!” They might take it the wrong way. Preface it by letting them know that it’s actually a good thing and you’re not attacking their winter waistline. Fat Face is the name of Jaymes Luu’s sandwich and gourmet popsicle business that has recently closed shop in Davis and will now be take residence in the new Bows and Arrows space (1815 19th Street, Sacramento). Luu describes the name of the business as a funny term for enjoying really good food, but in very humble way. It’s a term that she and her friends came up with that’s a very fitting definition, considering that Luu’s food is both good and humble.

On the Fat Face website, Luu encourages customers trying her popsicles to be “adventurous” and to “challenge their palates.” This might seem like a disclaimer for the out-there kind of flavors, but who wrote the rules on what a popsicle should be, anyway? Luu has been pushing the boundaries with her frozen confections, and the boundaries have never tasted so good. Among some of her more popular flavors is the Kaffir limeade and avocado, an interesting concoction for the title of “most popular.” Apparently fans of Fat Face have taken the challenge.

Fat Face’s previous location was on L Street in Davis, a small space where she not only served her signature popsicles, but also cranked out delicious sandwiches to boot. Grilled cheese with beer poached figs, smoked salmon, cola braised pork sandwiches or asparagus-filled breakfast “sammies” are some of the fun and sometimes wonky menu items that can be found at Fat Face. Ingredients are seasonal and specials can change on a whim, depending on who Luu has heard a suggestion from that day.

“[I get suggestions from] a lot of people I work with or customers will come up and be like, hey I think you should make this-and-this popsicle,” says Luu. “That will spark me to make new flavors.”

Luu is currently working on a mango and sticky rice popsicle and one of her newest flavors is something she calls the “bacon and egg.” Luu describes it as a “very yolky vanilla custard with a ginger bacon caramel.”

At the new location, Luu plans to extend her menu by playing off of the beer and wine list that Bows and Arrows owners Trisha Rhomberg and Olivia Coelho have been piecing together. The potential for crafting some small plates has sparked an interest for Luu, and she’s already got some ideas in mind.

“I want to have a pickle plate, fun popcorn; I’m trying to have more fun bar food like olives, but figure out how to make that more interesting than just olives,” says Luu.

When Luu decided to collaborate with Rhomberg and Coelho, she was drawn to their commitment to the project and how serious they were about making it all come together. They already had a building locked down, a kitchen in place and agreed to take on the build out. If all that wasn’t appealing enough, Luu also just simply liked what the whole thing was about.

The feeling was mutual.

“We went to eat lunch at Fat Face in Davis…walked in and loved everything about it. Super simple, sophisticated food that was local, seasonal, farm to table, scrumptious ingredients–really interesting flavors mixed together. The presentation was really humble but it was really good food,” says Coelho.

There’s something about Fat Face that Sacramento just hasn’t seen yet. It’s hard to put a label on and difficult to pigeonhole or compare with another cuisine. With the amount of support that was shown by Sacramento at the first annual Mobile Food Truck Festival, it’s clear that we love walking up to a truck to get something tasty. And wasn’t that idea born from the jingle of the neighborhood ice cream truck or paletero cart? Luu herself was at that festival, conducting a sort of Sacramento dry run, and her line was as long as the rest. Looks like we’re in for a fun summer. Now go get your Fat Face on.