History In Every Bite

The term “hole in the wall,” often used to describe the tiny joints that warm our big hearts, takes on a new meaning when we’re referring to an actual hole in a wall. In this case it’s actually a square–and on a hot day you’ll see arms protruding from this opening to hand deliver snow cones, fruit freezes or root beer floats to throngs of customers that congregate to cool down with something icy and cold. Next to the window, glass doors open to expose a small Japanese food market with dry and frozen items, and in the case by the register is a selection of manju and mochi. These little Japanese pastries aren’t filled with ice cream like what you might find at Trader Joe’s, but rather sweet red bean or lima bean paste and even peanut butter or custard. This is Osaka-ya, a Riverside-area sweets shop that’s been a Sacramento staple for almost 50 years. 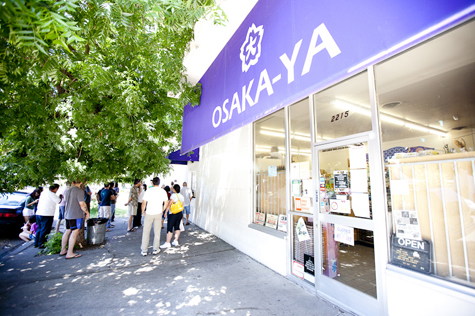 Located on 10th Street between V and U streets, a weathered blue and white sign marks the historic confections shop and bakery owned by the Nakatani family. Longtime original owners Kenji Nakatani and wife Asako Sato, who have since passed away, bought the shop in the early ‘60s and operated using Sato’s original recipes for roughly 46 years before daughter and business partner Linda Nakatani took over in 2009. Osaka-ya began across the street and then moved to its current location, which was once a fish market. Now manju of different flavors, colors and assortments are baked fresh in the back bakery and sold to customers who have grown to know and love them. 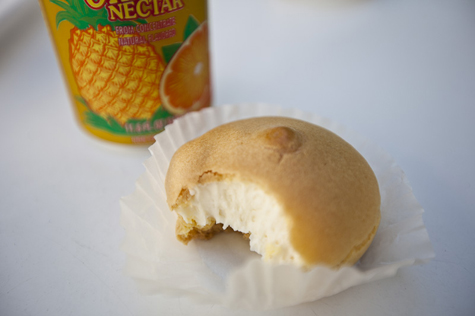 “I’ve been coming here for 30 years,” says Sacramento regular Deanna Preciado, who tends to order “something random” whenever she stops by.

Preciado didn’t look a day over 35, and that’s what makes Osaka-ya special. It’s one of the few places that some customers can say they’ve been coming to for most of their lives. We’re all sentimental about things that take us back to our childhoods, and the snow cones and manju are good for just that. When Submerge arrived, there were 20-some-odd people out front who ranged from small children to older folk in their 60s or 70s, each one there for something sweet. 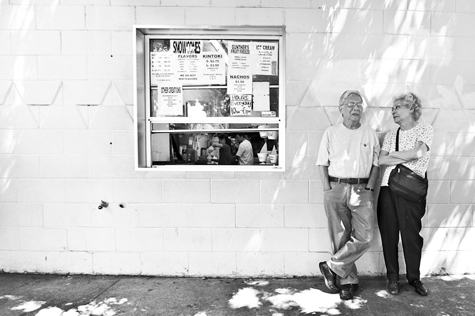 Manju is the general name for the traditional Japanese treats baked and sold at Osaka-ya. Mochi refers to the manju with a sticky, glutinous outside that has a sweet red bean paste in the center. If you’ve never had one before, it sounds adventurous; red beans inside a chewy exterior? But once you take a bite, you realize why so many people swear by these little delights. If “chewy” isn’t your thing, other varieties have a cake bun outside that sometimes have flavors like green tea, strawberry and coffee worked into the batter. Another popular variety has a peanut butter chocolate chip filling, and if you’re into creamy, we recommend the chou creams, a French puff pastry with vanilla custard that is often enjoyed frozen. Grab a cold Japanese UCC canned coffee from the mini fridge and voila! Afternoon delight. 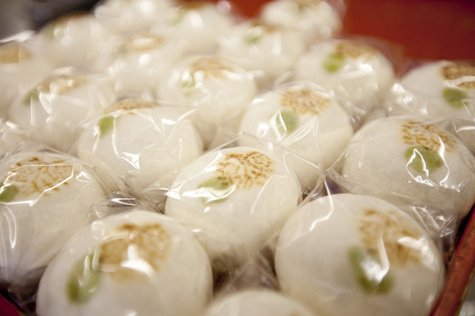 One of the more interesting flavors is called kinako ohagi, which has sweet whole rice outside, a whole red bean inside and is dusted with soybean powder. It looks a bit like a truffle and is traditionally served with tea. A Google search of kinaki ohagi led to various pictures of Kit Kat wrappers–one of Nestle’s flavors in Japan, apparently. Gimme a break? Bring it on. Also, look out for the special sakura domyouji-ko mochi, which are wrapped in cherry leaves. These are usually only available in March for Hina Matsuri, or Japanese Girl’s Day. Hina Matsuri is a celebration of Japanese girls and sakura mochi is food traditionally served. Don’t worry, Osaka-ya will still sell you one even if you’re a boy.

There’s a lot of cool historic stuff in Sacramento, but most of it is Victorian housing or behind ropes. There are few places left like Osaka-ya that is half a century old, owned by a family born and raised in Sacramento and selling confections the same way they did all that time ago. History in every bite.