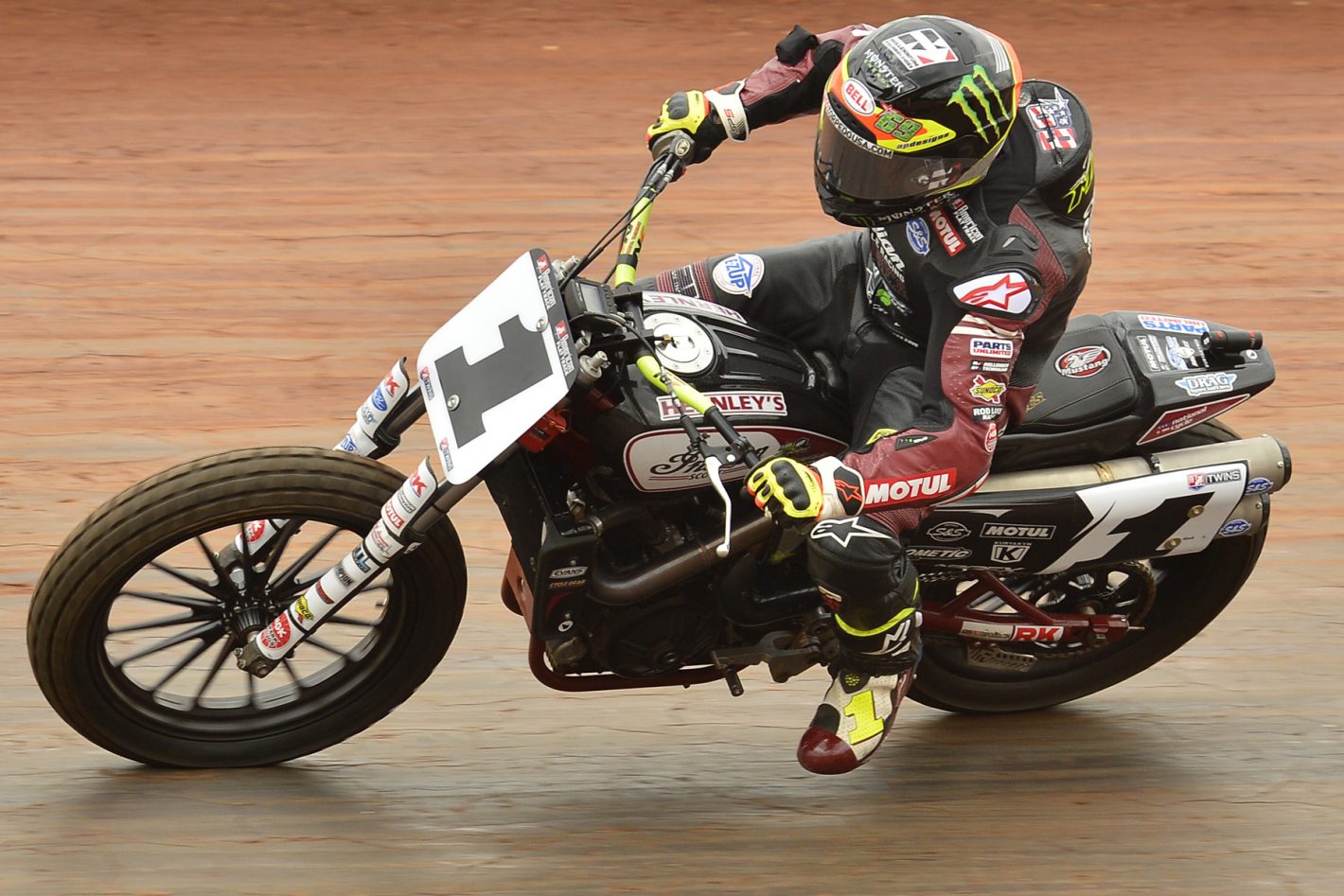 Flat track motorcycle racing has deep roots in the City of Trees. The Sacramento Mile has been running at Cal Expo since the 1950s, and the list of riders who have won the legendary race is a who’s who of racing royalty, including many AMA Motorcycle Hall of Famers.

In the last year, American Flat Track has seen an incredible surge in popularity, due in part to a significant TV broadcasting deal with NBC Sports and a re-envisioned, re-branded and re-focused AFT race series with updated classes and race formats, new manufacturers and new venues.

According to Americanflattrack.com, ticket sales doubled from 2016 to 2017, and nearly 2 million total viewers watched flat track races on NBCSN, a number that is likely to increase in 2018 with the TV broadcasts moving to weekends.

“And suddenly, America’s oldest and purest form of motorcycle sport was back on the radar, and making a thunderous noise,” AFT exclaims.

Far and away, the rider making the most noise in flat track is Jared Mees. The 32 year old is a multi Grand National Champion, was named the 2017 Cycle News Rider of the Year, has an X Games gold medal under his belt and is the face of the Indian Motorcycle Wrecking Crew, a trio of riders including Mees, Bryan Smith and Brad Baker, who finished first, second and third, respectively, in a dominating 2017 season sweep of the podium.

The 2018 season is off to another great start for Mees, who as of press time was atop the points leaderboard. Just days after we caught up with Mees for the following interview to chat with him about the Sacramento Mile (which is May 19), news broke that he had been penalized for using a chemically altered rear tire in a race in Atlanta earlier this year, but despite losing the points from that race as part of the penalty, Mees was still in the lead and is clearly the guy to beat this year. 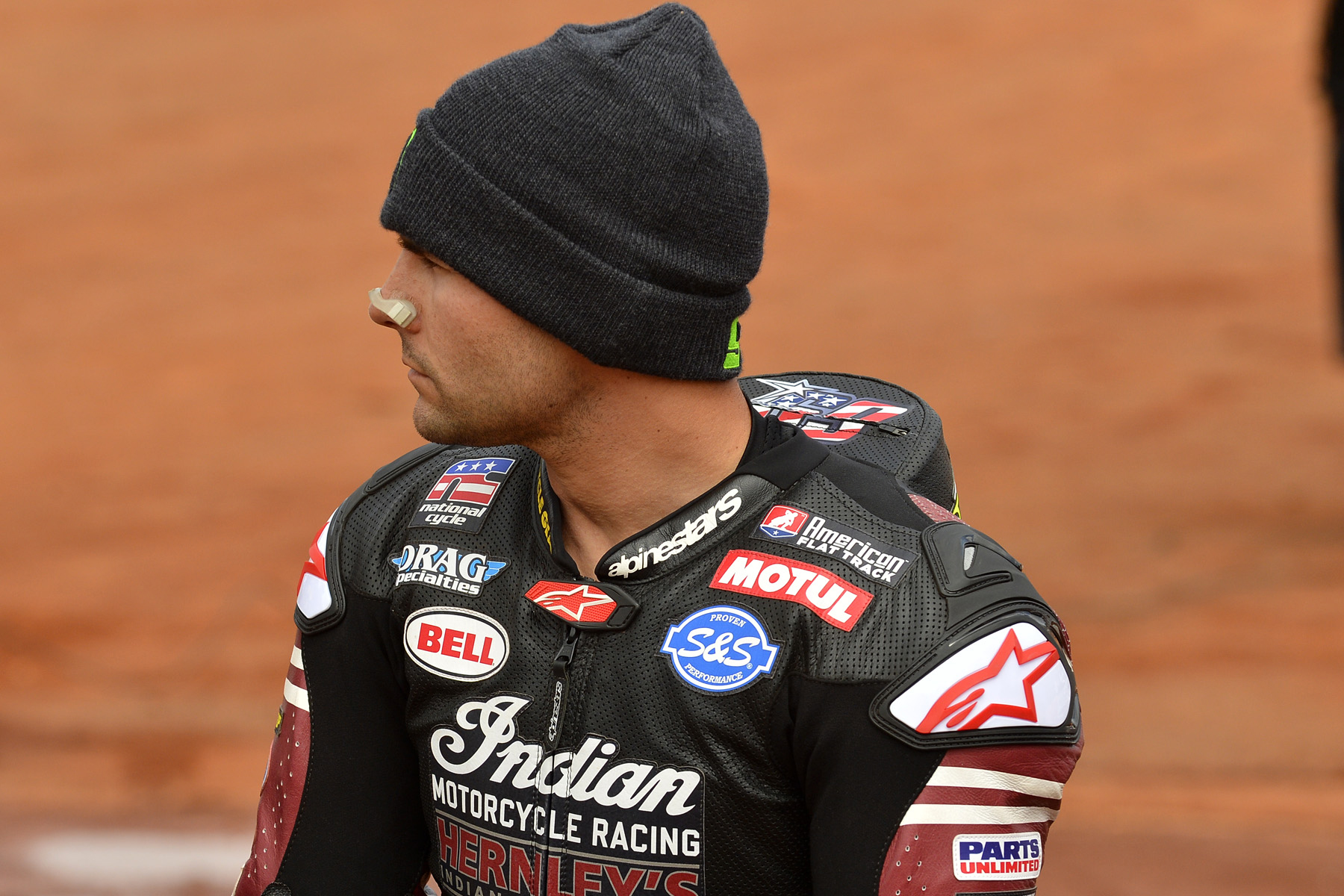 What’s it like being on those bikes going over 140 mph? It looks intense!
It is, for sure. Every race track is a little bit different feeling and you have to approach it a little bit different. For the Sac Mile, for example, the groove gets to be very narrow so you kind of one-line through the corners and you try to do your strategy and stuff down the straightaways and look to draft. But, yeah, it’s definitely intense, that’s for sure.

It seems like American Flat Track racing is really having a moment and is getting a lot more attention. How does it feel to see the sport you love growing in popularity?
It’s doing very well. You know, with the American Flat Track, there’s a lot of heart there. Flat track is in a really good spot; it’s the best spot I’ve ever seen it. In my opinion, this is as good as flat track has ever been, so hopefully it just keeps climbing forward and getting that momentum.

I’ll admit that last year was my first time attending the Sacramento Mile, and I totally got “bit by the bug,” as they say. It was one of my favorite events I went to all year. Why do you think flat track racing is appealing to both newcomers and veterans alike?
Well, I mean, flat track is a lot different than motocross and supercross. I think everybody is well aware of what motocross and supercross are. I’m not saying people are burnt out on supercross or motocross, I just think that flat track is a whole different vibe and a whole different atmosphere. I think it’s just a change and something that people are liking. Flat track has come a long way, with the race tracks, their timing, we’ve got television now, so it’s in a spot right now that’s pretty cool. Most of your street bikes today that are sold, other than like the Harleys or the Indians, are mostly like scrambler and hyper-moto style.

I see a lot of people riding motorcycles around Sacramento that look like flat track-inspired bikes. Triumph Scramblers and whatnot.
Yeah, for sure, so I think that has a little bit to do with it. The “crotch rocket” market right now is kind of fading big.

You had an incredible championship year in 2017. How do you back that up this year? Are you feeling any pressure or nerves as this season really starts to kick into high gear?
No, not at all. That’s the funny thing is I’m not feeling any pressure. Obviously I feel like I’m the guy to beat. You know, last year was last year. The goal at the end of this year, and the goal at the end of last year, was to win the championship. This year is no different. I want to keep the number one plate. I know to win a championship, you can win it by one point. Fortunately last year we had a dominating season and we were able to win it by like 80-something. We just take one race at a time and try to get through that race the best we can and move on. I know in the back of my mind that I don’t have to win every race. I’m going to every race with the focus of winning it and to try to keep that momentum going.

How is it being a part of the Indian Motorcycles team? And how fun is it to have such a great rivalry with the Harley-Davidson team?
Yeah, unfortunately it hasn’t been much of a rivalry on their part, because they’ve been struggling. They have been a little bit behind the eight ball. They had a really good result in Atlanta in the last race, so I feel like they’re getting their bikes worked out and putting a lot of effort into it. So you know it’s only good for the sport itself if Indian and Harley can go head-to-head to win and be on the podium at the same time. Right now it’s kind of a rivalry between me and my Indian teammates. 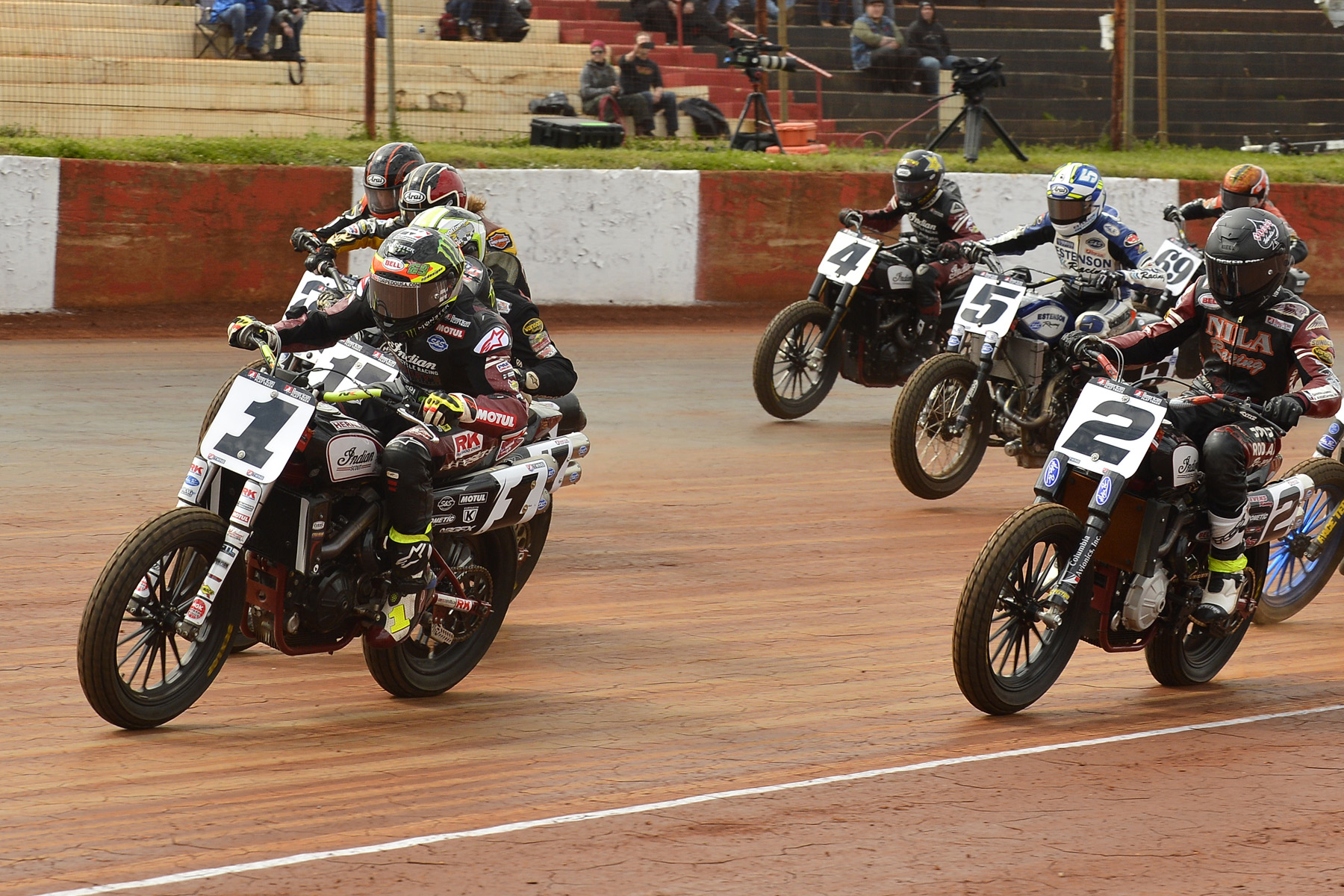 I saw that it was announced that Red Bull KTM will be a part of the American Flat Track series next year in 2019. What are your thoughts on that? Good for the sport? Maybe it could breed some new rivalries?
Yeah, no doubt at all! I think they’re going to come in on the singles side of things in 2019, and probably come in with a twin in 2020, at least that’s kind of what I read in between the lines of the press release. It’s only good for the sport. KTM has come a long way. Obviously the last couple years they’ve been basically the bike to beat in supercross and motocross.

Any special Sacramento Mile memories? What makes that race so special to be a part of? There’s a lot of history at Cal Expo Raceway.
The Sacramento Mile, as long as I can remember it, has been pretty much consistently the same. You know, we get that black groove around the bottom of the track and it’s usually pretty smooth. I’ve always enjoyed going to the Sacramento Mile. I’ve always liked the atmosphere and like how legendary that race is. I always look forward to going to Sacramento; unfortunately, I’ve never won it. Bryan Smith’s been basically the guy to beat there; he’s won the thing like the last six or seven times, so hopefully this year it’s my turn.

For people who maybe have never been to a flat track motorcycle race, what would you say they can expect? How would you describe the atmosphere at these races?
You know, it’s pretty family oriented at a flat track race—pretty laid back. It gets very exciting once we get going. Our races are somewhat short, you know, and most of the time, especially the Sacramento Mile, it’s a nail-biter! You’re not gonna really know who the winner is until they cross the line. I don’t remember anybody ever getting away at the Sacramento Mile, like checking out, so it’s an exciting one.

Catch Jared Mees and dozens of the best flat track motorcycle racers in the world at the legendary Sacramento Mile on Saturday, May 19, 2018, at Cal Expo (1600 Exposition Blvd., Sacramento). Gates will open at 2 p.m. with racing action going down all day and into the night. Tickets start at just $25 and are available through SDI-Racing.com.