All the World’s a Stage

Have you ever wanted to quit your perfectly good 9-to-5 job to pursue your passion? Well in May 2009 that is precisely what Jayson Wilde did when he quit a good job to learn how to be a bartender. To explain why he threw away 10 years at a good company, Wilde said through his patented goofy smile, “Full benefits are great but being happy is better.”

And happy this guy is, in fact he is one of the happiest guys I’ve ever met. His natural good cheer and hard work has led him from never having stepped behind a bar to being a manager at one of the top 10 bars in America within two years!

This Sacramento native started his quest at Midtown’s very own Shady Lady Saloon. “I would hang out at Shady with my Bartender’s Bible and just bombard the bartenders with questions,” he said. “After a month or two of that they were like, ‘Do you want a job here?’

Wilde had to put in his dues, starting at the bottom as a lowly bar back. “I broke a lot of glasses,” he said with a laugh. “But those guys were super supportive and taught me the ropes.” This may have been a relatively short road for Wilde, but it was not an easy one. “My first year I was working pretty much seven days a week and any days I had off I was going into the city [San Francisco] to try out new bars and new drinks. I was trying to learn as much as I could so I could bring it back to Sacramento.” With hard work and ambition he was able to challenge and improve his palate. After a year or so of this, Wilde was given the chance to work at one of the best craft cocktail bars in San Francisco and arguably one of the best bars in the country, Bourbon and Branch. Six short months later he was promoted to bar manager and since then has done guest spots all over California, cocktail demonstrations at the W Hotel in San Francisco and was recently named one of SF Weekly’s New Generation of Bar Stars.

I had a chance to sit down and talk drinks with the cocktail whiz kid at the scene of the crime, Shady Lady Saloon.

What got you interested in tending bar?
Well, I had been working at an insurance company for about 12 years, and it was great because I had full benefits and five weeks paid vacation. The vacation time was great. When I was playing guitar with Whiskey Rebels, I could do a ton of touring. But that started to fizzle out. Everyone started getting married and doing the mortgage thing. I realized I needed to do something that allowed me to be more creative, because the insurance job was going to make me murder myself. [Laughs] I was going to kill myself. I have a creative drive. That’s how I have fun, and the insurance job wasn’t going to allow me to have any fun. I knew the guys here at Shady, and they were kind enough to let me step behind the bar, and I fell in love with it.

How do you feel about being called a mixologist?
It’s bartender. I feel like the whole mixology thing…I get it, whenever anyone says that to me I’m not like, “No, no, no, listen here son.” I don’t correct them. Being a good bartender is all about being humble and making sure that the customer is having a good time. I don’t want anyone to feel like, “This guy right here in front of me is amazing and makes all these things that are great.” I don’t want to be put on a pedestal. I’m not doing as much for society as a teacher or anything. I just make drinks, and we have a good time together. The term mixologist makes everything seem so serious, and that’s not what being behind a bar is. I don’t wear a lab coat.

What are the components to a good cocktail?
There are three major things to making a great cocktail: The first thing is appearance. It’s true what they say, you feast with your eyes first. If you see something that looks appetizing it’s going to boost your interest, “That looks awesome, it must taste awesome.” Second is smell–you get a lot flavor out of your olfactory sense, your upper palate. It’s got to smell enticing. If you have a cocktail that has egg whites in it, and it smells like eggs, it may taste good but it’s going to give the wrong sensory impression. Third, obviously it’s got to taste great. Just like a chef puts a meal together, a drink should have complementary flavors and not too much of this or that, balance is key. Don’t just grab spirits and try to force them to work together. Think about cooking a meal or desserts. What flavors do you know already go together? Use ingredients that make sense: apples and cinnamon, raisins and rye–a lot of times if there isn’t a drink that uses certain ingredients, it’s because they don’t go together. Don’t try to reinvent the wheel.

Where do you get the inspiration for some of your more unique drinks?
I get a lot of my inspiration from cooking. I like going to a restaurant, not to rip them off but to get inspiration. It’s like music, when you hear a good song with a part you like, it can inspire you to write something. When I have a drink I like, maybe with rye, I try to think, what can I do with this but use rum? Or some things I’m just walking through the grocery store and I see like a chocolate bar with chili peppers in it I’m like, “Wow that’s cool, how can I make it into a cocktail?” I try to keep an open mind but honestly it’s all trial and error.

So do you have a favorite to make?
As cheesy as it sounds, my favorite drink to make is the one that will make the patron feel the most excited about what they are about to have. It doesn’t matter whether I make a vodka soda or an elaborate six-ingredient cocktail. It matters when I hand the customer a drink and they say, “Perfect, exactly what I wanted.” Having people like what I make makes me the happiest.

Have you seen any new trends in what people are drinking or bartenders are making?
A lot of people are starting to move onto this room temperature cocktail thing or barrel aging and stuff like that. It’s interesting as a fad, but it’s not something I think will stick around. If someone hands me a room temperature drink I’m going to be like, “Really? It’s warm, I want something refreshing, cold and nice.” I have noticed a lot of bars are moving toward the slow food thing, the farm to table mentality, which is great to see. There are a lot of smaller cities that are getting into it. Sacramento has really been stepping toward fresher ingredients.

Speaking of the Slow Food Movement, you are doing a guest spot at local slow food restaurant, Grange, for Midtown Cocktail Week. What is the concept or theme if you will?
Complete and utter mayhem in the funnest way possible, that’s the easiest way to put it [laughs]. Ryan Seng [resident Grange bartender] and I have been getting together to construct a cocktail menu for a vintage carnival theme. What we mean by that is we are taking carnival foods: cotton candy, cracker jacks, snow cones and all the interesting fun carnival stuff and putting them in cocktail form. We also hired a really cool French noir-style act from Oakland called The Vespertine Circus, to perform during the event. So basically we will have a free punch for you when you walk in the door and mayhem will follow. It’s going to be super fun, no frowns allowed. No sad clowns allowed!

What tips do you have for the home bartender?
Have a good time. Start out with simple stuff and don’t try too hard. Try making an old fashioned, get your bearings. Another good thing would be to get a bartending book. Scott Beattie has a great book Artisanal Cocktails, or Jerry Thompson has good stuff too. Be adventurous but keep it simple. Try new things. That’s what spirits and food is all about, being fun and adventurous. 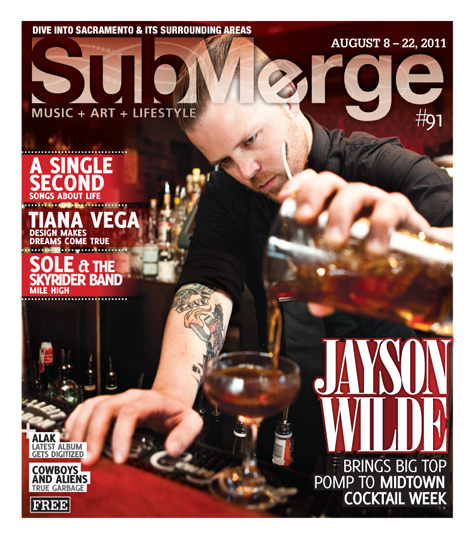 Midtown Cocktail Week is Aug. 15—21, 2011. Jayson Wilde and Ryan Seng will host an event at The Citizen Hotel Ballroom on Aug. 19, 2011. “The Greatest Cocktail on Earth” will feature carnival-inspired drinks such as The Bearded Lady and Strong Man as well as others. Admission is free, and drink tickets will cost $8. For more info on Midtown Cocktail Week, go to Midtowncocktailweek.org.