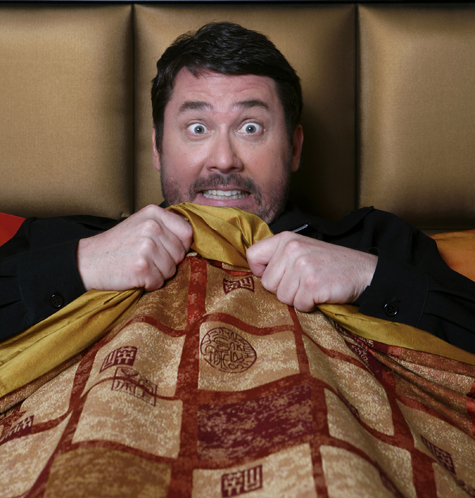 Humoredian Doug Benson has it made. While you and I sit at home angered by celebrity antics, cursing the television, while we watch movies and comment to our friends on merits, while we get stoned and laugh at silly nonsense, Benson has signed some deal in blood to get paid for these slacker pastimes.

Benson is currently on tour, so I called him at a Hampton Inn in St. Louis (proving he is not too famous for our little publication). He had just finished an appearance on the Great Day St. Louis morning show and returned to his room to escape the “hella hot” Midwest forecast. Upon hearing a familiar, often abused, Northern California slang term, I asked Doug if he was from our territory. “I just hear a bunch of words and repeat them,” he replied. “It’s not habit.”

This August, Benson will be at Sacramento’s Punch Line, a venue he has played before. He was particularly intrigued with the strip mall location of the Punch Line, which probably looks a little different now. “It’s the strangest comedy club positioning I’ve ever seen,” he said. “There [was] like a foam store, a TJ Maxx and a mattress store. It’s like a one-stop shopping center for a pimp. He’d be able to get all his shit there.”

Those still unfamiliar with Doug Benson might need to take a morning or two off from wake-and-baking. In 2006, High Times named Benson Stoner of the Year, aka your hero. His film, Super High Me, took the premise of Super Size Me and exchanged it with pot. He is the co-creator/writer/star of The Marijuana-logues, which is self-explanatory. He once saw a vagina smoking a joint.

Along with his pot-related accolades, he is a talking head on Best Week Ever, finished top six on Last Comic Standing, has a podcast called I Love Movies, a comedy album called Professional Humoredian—and he said I was a good interviewer.

Most comedians, or people for that matter, are forced to keep their personal habits ambiguous—possibly telling pot jokes or laughing at pot jokes, but not too frequently so they don’t arouse suspicion. Benson has managed to become a renowned toker, yet makes appearances on local morning shows without network hesitation. “They keep it clean and family-style, but it’s also live,” Benson said. “Sometimes when I’m talking, I can see in the eyes of the host that I’m being too risquÃƒÂ© for morning television.”

He admits he does not mind the interviews that dodge his pot humor, since he has plenty to talk about beyond marijuana. Yet, his core fans remain a faded following. On Twitter the night prior to our interview, he thanked a St. Louis kid, whose name he could not remember, for smoking him up in his car. I asked Benson if it was bothersome to be loved by a group of people so eager to share their budding wealth. “It’s an exciting thing to have in my life if I am just wandering around and someone offers to smoke me up,” he said. “At shows I get so many offers I can’t say yes to everybody. People get bummed out, which is kind of a drag. I’d be happy to smoke with everybody; unfortunately I’ve got things to do. I certainly didn’t start telling jokes about pot to get free pot, but it’s been an amazing side benefit.”

Benson began his stand-up career on a dare from a friend, while working as a stand-in and extra in Los Angeles. That was 23 years ago. Benson made new friends through comedy by becoming part of the Comedians of Comedy, a group he has toured with extensively. In Super High Me, several of his comedian friends smoke weed on camera, specifically Sarah Silverman and Brian Posehn. Benson has admitted that he did not smoke weed until age 27 when he started working with Bay Area comedians who toke after every show. Now, Benson can’t be seen in public without accusations of being blunted beyond belief; even followers on Twitter that day accused him of being high on a morning show, to which he attested, “No I just woke up and did a show. I’m not one to set the alarm for 15 minutes earlier so I can wake and bake before a show.”

“I do have naturally squinty eyes,” he said. “And I do smoke a lot of pot. So I don’t blame them for thinking I’m high. I can make jokes even when I’m not high. I’m that good at it.”

Truly Benson is capable of entertaining beyond cannabis conversations. His I Love Movies podcast, which he records at Los Angeles’s Upright Citizens Brigade Theater, has a simple premise. Benson and his comedian friends record their rants on movies in front of a studio audience and play the Leonard Maltin game or the Name That Tune game show’s Bid-A-Note round, but with movies.

A fan of the summer blockbuster push, he said he is disappointed with this season thus far. “Terminator was disappointing, Wolverine was disappointing,” he said. “I watched five minutes of Angels and Demons, then got up and left. I was like ‘I can see Star Trek again.'”

Still he found Star Trek was not a perfect movie beyond criticism. In fact, Benson raises an interesting point regarding the story. “I didn’t have the excitement over it that I hoped to have,” Benson said. “It did a good job reinventing all the characters.” Benson immediately broke into a rant with possible spoiler alerts, “Why do they always have to bring time travel into it? Now that they’ve introduced time travel and old Spock tells young Kirk what to do, why can’t old Spock just show up all the time when there’s a problem.” He went on to compare it to Superman spinning the world backwards to turn back time.

Benson included The Hangover in the short list of summer movies he’s enjoyed so far. Show stealer Zach Galifianakis is a member of the Comedians of Comedy and makes an appearance in Super High Me as Benson’s friend. “Well, I take a lot of credit for breaking Zach’s movie career with his appearance in Super High Me,” he said. “Things have been going great for him ever since. I look forward to riding his coattails.” Benson expressed his own interest in pushing into feature films, but admitted he is not prepared to do the full frontal nudity that Galifianakis bared. “I’m a little shy when it comes to public nudity,” he said.

Benson’s current tour is in preparation for his new comedy album, Unbalanced Load, on Comedy Central Records. He is performing an “evolving set” that includes new material. “Certainly anyone who saw me when I was last in Sacramento can expect a lot of new material,” he said. “I will be doing a lot of material from the record that week.” Benson said he usually reserves some time near the end of his set for requests from the audience outside of “more jokes about pot.” He just encourages enthusiasts to shout their favorite bits without tampering with the joke. “The best way to ask for a joke during the show is to not yell out the punch line of the joke,” he said. “Where do I go from there?” 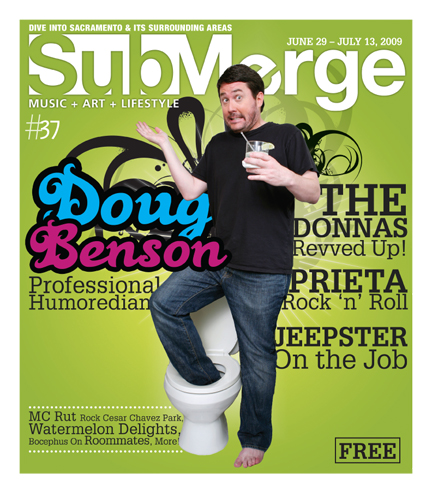